Contribute Now
Ad
Since last week, there has been a flurry of news items in social and mainstream media about Sanjukta Parashar, the superintendent of police in Assam’s Sonitpur district. They gave instances of her bravado, heaped richly-deserved praises on her, and many of them described her as the “first female IPS officer from Assam”.

Sadly for me, the articles were a reminder that popular history, both in Assam and the rest of India, has forgotten all about Yamin Hazarika. That petite lady wore a heavy mantle at a time when women were still defining their roles in India. She was selected in 1979 for the state police services DANIPS (Delhi Andaman Nicobar Islands Police Services) and made it to Indira Gandhi's security team. While it's unclear whether she was later promoted to the Indian Police Services, most people in Assam saw Hazarika as no less than an IPS officer and a trailblazer in every way.

To those growing up in Guwahati in the ’90s, Hazarika was one of the few modern female Assamese icons. I met her only twice in my school years but she left a lasting impression on my young mind. She belonged to the Assamese Muslim community, from which few women icons had emerged until then. That impression stayed with me. So last week, when the news reports on Parashar began appearing, I decided to learn more about Hazarika. Who was she truly? To find out, I met her 80-year-old mother and her younger brother Yusuf Hazarika at their home in Guwahati.

Yamin Hazarika was born in the late 1950s in Lakhtokia, Guwahati, to Shameem Hazarika and Mohammed Serajul Hazarika. She was the second of five siblings.

Lakhtokia is one of the oldest pockets in Guwahati city that was designed by the British and houses some of the most elite and accomplished Assamese Muslims. Former Indian President Fakhruddin Ali Ahmed too was from Lakhtokia, and as my conversation with Hazarika’s brother revealed, their family is related to the late president. 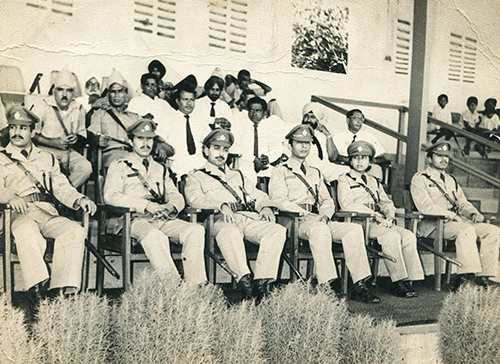 Her grandfather Ikram Rasul was the superintendent of excise in colonial times and was posted in Sylhet. Due to his involvement in the freedom movement, the family said, he was sacked from the job. Hazarika’s mother Shameem was one of the first female car drivers in Guwahati.

Hazarika started her schooling at St Mary’s Convent in Guwahati and passed her senior Cambridge examinations from Pine Mount Convent in Shillong. After that, she left for Delhi to read history at IP College. “She was a bright and studious girl who was always into her books and was completely no-nonsense,” recalled her brother.

After graduation, Hazarika pursued law in Guwahati and appeared for the UPSC examinations twice – first in 1977-78 and then in 1978-79 – clearing both times. She finished her police training at the Maharaj Ranjit Singh Punjab Police Academy in Phillaur, Punjab, where she met her future husband, Rajeev Sagar, who was an IPS officer from the Haryana cadre. 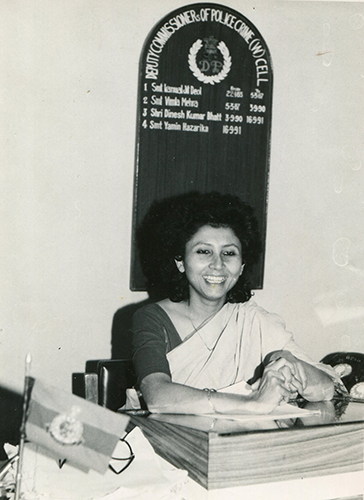 “The results were delayed by over a year when she appeared the first time,” said Yusuf. “Those came out in 1979. By then she had already cracked her second attempt and qualified for the DANIPS [Delhi Andaman Nicobar Islands Police Services] and was part of Indira Gandhi’s security team.”

Does DANIPS qualify as part of the IPS system? One serving IPS officer said a DANIPS official is on par with an IPS officer since DANIPS is a feeder cadre for the IPS. “Yamin was indeed the first Assamese woman to be an IPS officer,” the serving officer insisted, though Scroll could not independently verify this claim. A query to the Ministry of Home Affairs revealed that DANIPS officials get promoted to IPS after certain years’ service. Either way, Hazarika went on to serve in important positions.

Hazarika was posted as  assistant commissioner of police in Chanakyapuri, Delhi, and after some time she was promoted to the position of deputy commissioner of police (crimes against women cell) in the capital. In 1998, she was sent to Bosnia as part of the UN peacekeeping force for three months. It was there that she was diagnosed with leukaemia and she had to return to India. Hazarika received treatment at the Tata Memorial Centre in Mumbai and at Delhi’s All India Institute of Medical Sciences, but she succumbed to cancer on July 25, 1999. She was only 43.

The few articles on the web on Hazarika describe how she oversaw stringent measures to cut down sexual harassment of women on the capital’s streets. Yet, despite her strong cop persona, Yamin was mild-mannered. “Innu was a very simple and soft spoken lady,” said her brother. “She would hardly raise her voice or be rude.”

Her daughter Huma Hazarika Sharma added: “She was a strong person. Though she was a strict disciplinarian, she was also a fun-loving person. Everyone in the police force who interacted with her still has incredible things to say.”

An officer at the Hauz Khas police station in Delhi, where Hazarika was posted, spoke at length of the time when he served under her. “She was a very tough lady and even today I will salute her,” he said. “I learned so much from her. I cried a lot the day she died.”

Yamin Hazarika may have faded from the media’s memory, but she is still the first female Assamese icon for many. That includes me.

Shaheen Ahmed is a research scholar at the Jawaharlal Nehru University, Delhi, and a former journalist.