Contribute Now
Ad
Sticky regulations and high taxes are spoiling the party for alcohol and cigarette companies in India.

SABMiller, the world’s second largest brewer, for instance, wrote down (pdf) Rs 2,007 crore of its investment in India because of “increasing regulatory and excise challenges.”

And Indian tobacco major ITC – which sells four out of every five cigarettes in the country – may soon have to decrease its dependence on cigarettes. The growth in the cigarette business, which contributes around 42% (pdf) to the company’s revenue, is stalling due to repeated price hikes that are impacting volumes, according to a June 10 report by brokerage firm, Nomura.

India is one of the fastest growing alcohol markets in the world, withper capita consumption of spirits expanding at a five-year compounded annual growth rate of 6%, and beer at 8%. But foreign brewers looking to cash in are increasingly getting stifled by a web of regulations. And SABMiller’s write-down is only a precautionary step to prevent future losses stemming from high outgoes towards excise duties and taxes.

The company in a statement said the write-down primarily reflects their “assessment of the impact of increasing regulatory and excise challenges in the operating environment in India,” apart from the proposed national goods and services tax, which will not apply to beer.

“In India, alcohol regulation is tougher than in virtually any other country we can think of where alcohol is permitted. It takes the form of high excise duties, restrictive retail sales licences, and a blanket advertising ban,” investment bank, Societe Generale, said in a report.

Excise duties, for instance, paid by United Spirits – one of India’s largest alcoholic beverages firm, owned by global heavyweight Diageo – has shot up from 46.3% of its gross sales in 2006 to 61.2% in 2015, according to Societe Generale. On an average, around 16% of state government revenue in India comes from alcohol taxes.

Other problems include a cap in retail prices and high raw material prices, which may shrink margins.

“Raw materials’ costs are likely to rise, and with most states imposing a maximum retail price, margins, which have declined over the last eight years despite volume growth, are likely to be squeezed,” the report said.

Alongside, it isn’t exactly easy for Indians to find their favourite tipple. There are 65,000 licensed retailers in India, according to Societe Generale, which means one outlet per 18,000 people. That’s a far cry from even China, for example, which has one outlet per 250 people.

The regulatory situation isn’t making it much better for the likes of ITC, which derives about 80% of its bottom line from the cigarette business.

Although a series of excise duty hikes and measures like a ban on the sale of loose cigarettes have put pressure on ITC’s cash cow, it has so far managed to maintain a healthy profit growth by controlling cost.

But now, according to Nomura, with the likelihood of a double-digit excise duty increases over the next few years and a decline in volumes, “it will become more difficult for the company to drive costs lower, which will mean that another lever which helped it to drive strong earnings before interest and tax growth will come under pressure.” The EBIT – or operating profit – is essentially the difference between the net sales and costs.

In the second half of the 2015 fiscal, ITC’s EBIT growth dropped to 7.4% from an average of 17% during the period between 2006 and 2014. This is largely because of consistent and regular price hikes for cigarettes, Nomura added.

Here’s how the growth in EBIT and costs has panned out for ITC: 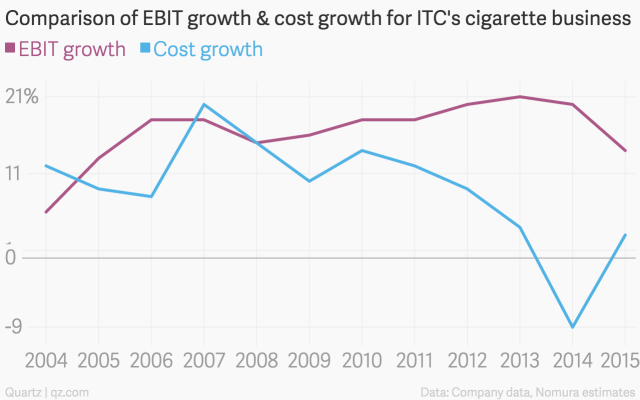 Even volumes of tobacco products across the country are dropping. For March, the output for tobacco and chewable tobacco products dipped 12.1% over a year ago, according to the Index of Industrial Production data.