Become a Member
Ad
Prime Minister Narendra Modi has on numerous occasions expressed his determination to eradicate open defecation in India over the next four years by building millions of toilets, even as more than two-thirds of rural households lack this basic facility. But given the current rate at which these toilets are being built, the task is going to take 15 years instead of just five as the prime minister expects.

Apart from the lack of toilets in the country, and the time it will take to make up the deficit, the other real issue, experts point out, is that many of those with access to public toilets aren’t using them either.

While canvassing a few districts in West Bengal for a social work assignment, Mayuri Bhattacharjee, a 28-year-old social worker from Kolkata who is working in the area of sanitation encountered a similar problem. Even after travelling for a few hundred kilometres, she couldn’t find a toilet on the highways. When she did finally find one, it was stinking, didn’t have a lock from the inside, and had no water to flush. She had to go look a little farther in her quest for a functional toilet.

This incident prompted her to look closely at the condition of toilets around her and she found an obvious yet often ignored problem that makes it tough to believe the new toilets will be used when even the existing ones do not have takers.

“Sanitation is the name of the campaign launched by the Prime Minister but he is interested in just the number of toilets,” Bhattacharjee said. “When I couldn’t find a usable toilet, it pointed me to a larger problem of the stinking condition of the existing infrastructure and I decided to review toilets for the next few years.”

Under an initiative she has termed Loo Watch, Bhattacharjee will visit each of the 180 public toilets in Kolkata and review them on parameters such as cleanliness, availability of soap and water, price of the service and a lock on the door from the inside. So far, she has visited only 15 toilets in the city, but expects to do more as the initiative catches on and volunteers sign on to take up the task in their respective cities. “It is not right to say that all public toilets are dirty but there’s no information on which ones are clean or even where they are located,” Bhattacharjee said.

It wasn’t easy to locate these toilets in the first place and when Bhattacharjee was finally able to get a list of existing toilets in the city, she was able to pinpoint the possible reasons as to why many more people aren’t using them. “Some toilets charged women double the rates they were charging the men,” she said. “That could be an obstacle in itself. Even if the difference was of just Rs 1, the practice is discriminatory against women.” 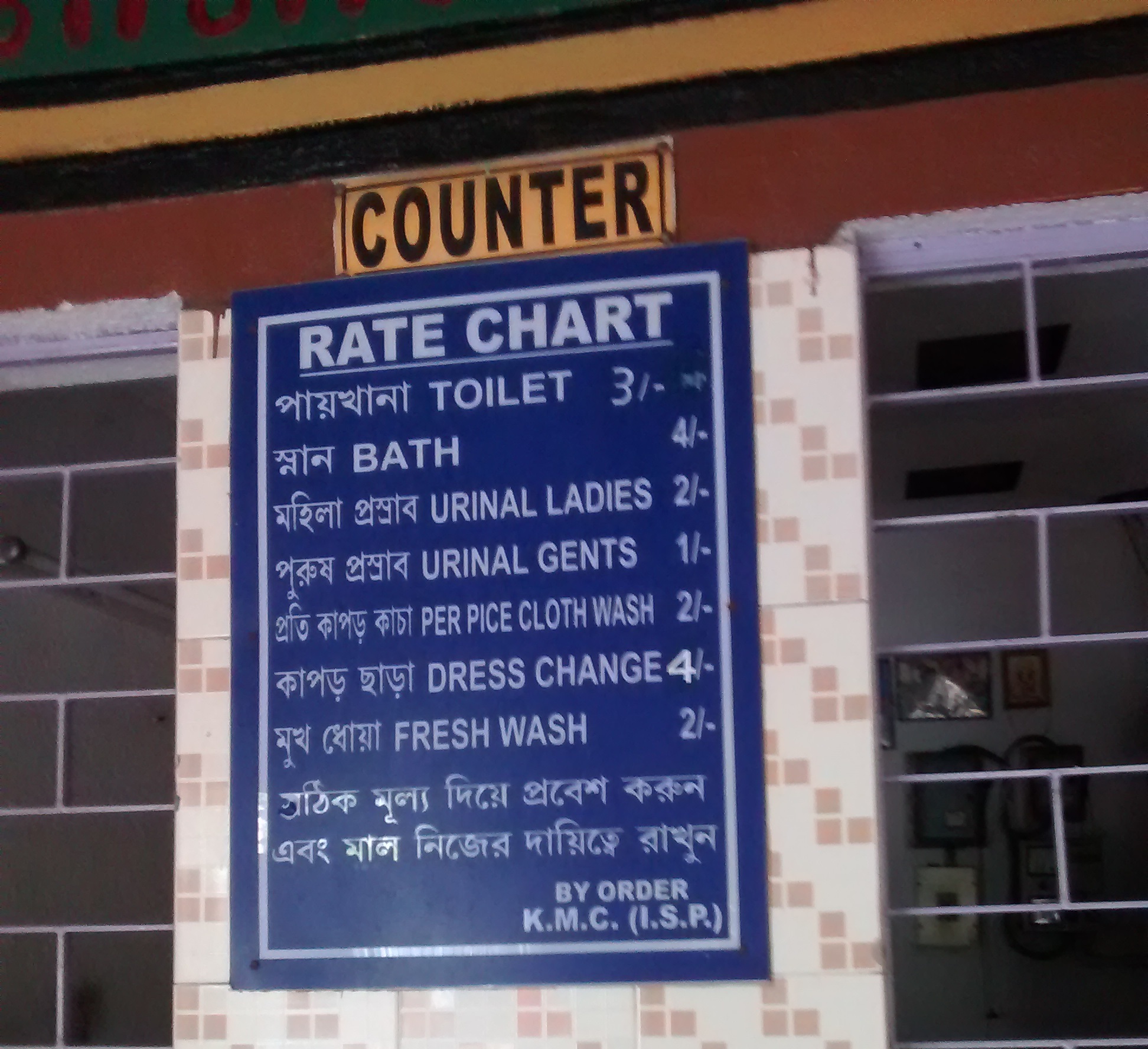 The idea is simple: all measures should be taken to ensure that people routinely use these toilets. Bhattacharjee blames the government for its inability to look beyond targets, saying that what stops many people from using the existing faciilties is the fact that they are badly maintained, if at all.

In places like Kolkata, the responsibility could be fixed on those assigned to run them, such as the non-governmental organisation Sulabh International, which  receive tenders from the government to operate these facilities. However, Bhattacharjee differs. “The government should not wash its hands off responsibility just because a private player is operating it,” she said. “They need to do strict and random checking to at least be aware of what the common man on the road goes through before he decides to pee on the side wall of the loo rather than going inside. Women can’t even do that.”

In her latest review of a Kolkata toilet, Bhattacharjee wrote about the loo situated at the busy junction of the Eastern Metropolitan bypass. There was no soap and the mug was dirty, while the toilet smelled like phenyl. The real problem, she wrote, was the absence of a dustbin. “So, if you need to dispose of a used sanitary pad, there are two choices: Carry the used pad in your bag or just leave it inside the cubicle. Which one would you choose?”

Even though the initiative can be informative for those in Kolkata, there are challenges of scaling it up, not to mention the challenges of influencing behaviour. It would be hard to get people to volunteer from across the country and report on the situation of toilets, conceded Bhattacharjee, adding that it would be equally hard to maintain the quality of reviews.

“I received a few reviews from Delhi as well, but most of them were just pictures and two lines of text, which isn’t informative enough, so we decided to do it again,” she added.

In the long term, Bhatacharjee said that she would like to build a street map with location of toilets and their reviews. Her project is likely to take a little longer than expected. “We don’t have a male loo watcher yet, so we don’t know what the condition of gents' toilets is like and that means half the effort is missing,” she conceded.