The spiral of violence that began in Sopore in Jammu and Kashmir in May has no answers, only questions. Who are the gunmen who have killed six people in less than a month? Was it the military, as the separatists claim? Or was it the separatists, as the government claims? Are they the work of the same people? And why this sudden butchery?

What we know is this: on May 17, posters appeared in Sopore, carrying the name of an unknown militant group called the Lashkar-e-Islam, demanding a shutdown of cellular operations in the area. Days later, cellular towers were attacked and two people with tenuous links to telephony shot dead. However, the killings didn’t stop there. Four more have fallen to bullets since then.

The murders have thrown the Kashmir Valley into confusion. In Sopore, and its 23 villages, fear rules the streets. People have stopped going to mosque in the morning or at night. They claim, in hushed tones, that militants didn’t kill the six.

Who were those six? Scroll.in visited their homes to find out. 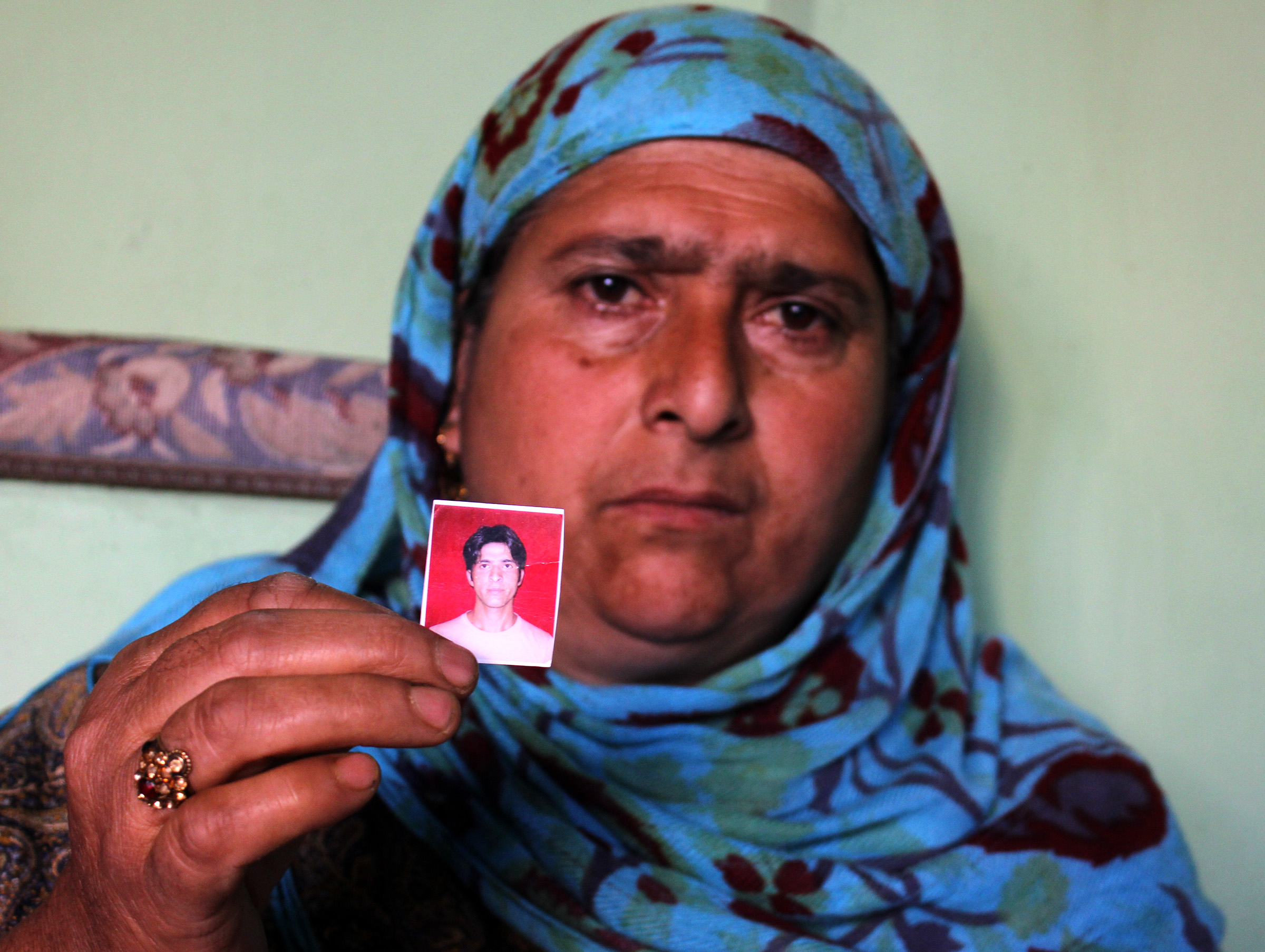 May 25 started like any other day for Rafiq Ahmad’s family. His mother Atiqa Begum prepared his lunch and packed it in a tiffin box. Rafiq placed the tiffin in his bag and left for work.

A commerce graduate, Rafiq had joined a franchise of the Bharat Sanchar Nigam Limited in Sopore town, 15 km from his parents’ house, as a salesman seven months ago. The salary of Rs 2,500 was to support his family, while he prepared to study at a college in Indore, where his friend was completing the admission procedure on his behalf.

May 25 didn’t end like any other day for Rafiq Ahmad’s family. “Around 10.30 am I received a phone call from my cousin, while I was on my way to sit for an examination,” recalled his brother Waseem Ahmad. “No one could understand what had happened. He was shot dead in his cabin at the franchise.”

The family says Rafiq didn’t know about the threatening posters. If he had, he would have quit his job. Nearly a month on, his bag and unopened tiffin box are still lying in the shop. 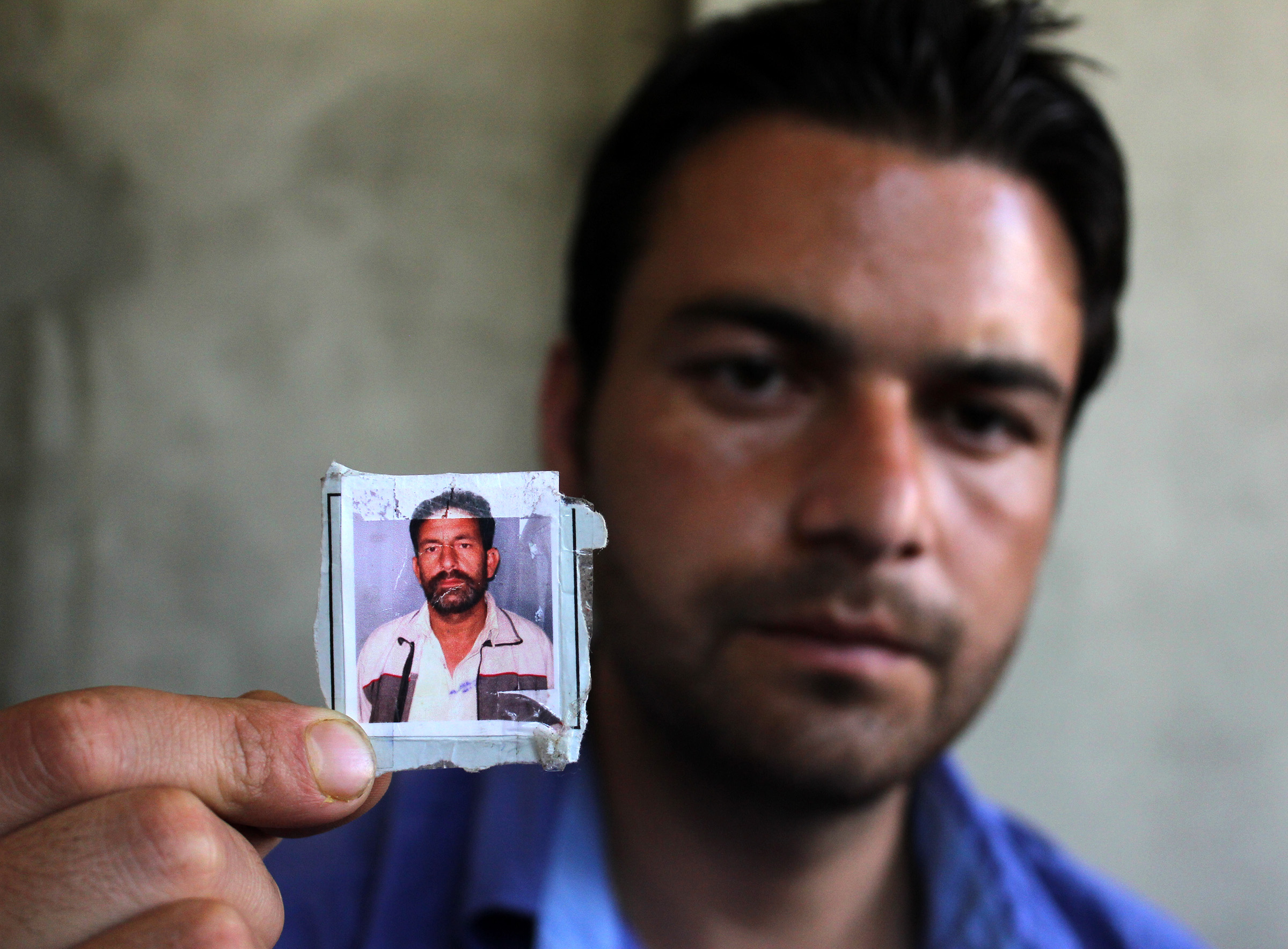 Ghulam Hassan was a fruit trader in the Duroo village of Sopore. On May 26, he was watching the Pakistan verus Zimbabwe cricket match in his room, while his daughter, Tabassum and wife were in the kitchen. His four sons – Tanveer, Parvez, Yasir and Arbaz hadn’t returned home yet.

At 9.15 pm, Parvez was walking back when he heard gunshots. Like everyone in the street outside his house, Parvez ran in the other direction. “I thought someone may have fired at the cellphone tower in our compound,” said Parvez. “After sometime, I went home and found my father lying in blood.”

Parvez says more than a dozen bullets were fired at his father. Upon hearing the report, the daughter and the wife in the kitchen had ducked to the floor. No one claims to have seen the gunmen flee.

The family says it had asked Airtel to close down the cellphone tower in their compound after the threat posters came up, but it wasn’t very receptive to the plea. Even the police was informed, says Parvez, but it said there are 3,000 towers in the town and it can’t provide security to all of them. The tower has now been switched off. 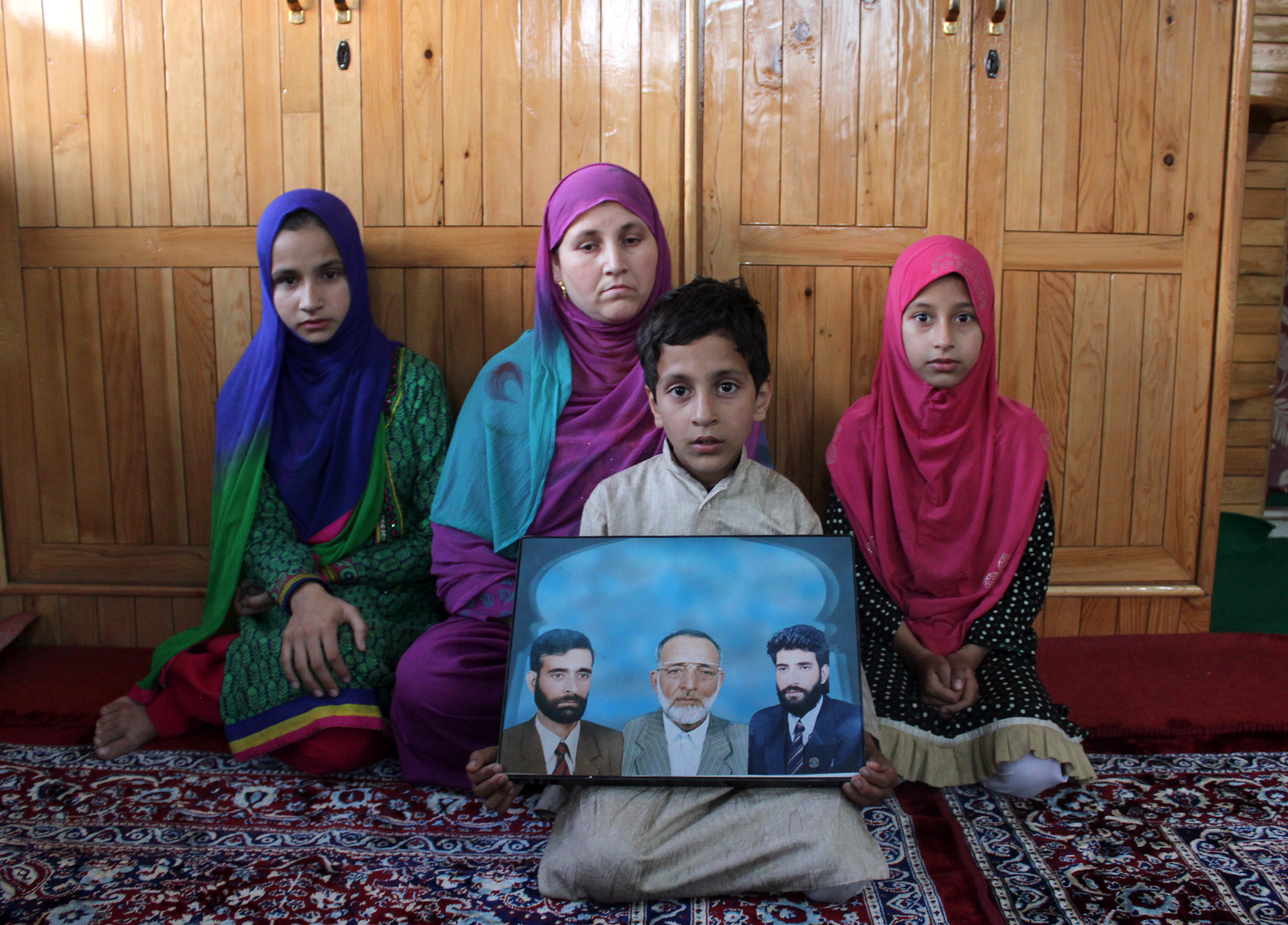 A science graduate and a pharmacist at the sub-district hospital of Sopore, Altaf was also a member of the Hurriyat Conference and a staunch pro-freedom activist who gave sermons at the local mosque. Five days before his killing, he was detained by the Special Operations Group of the police, his family says.

On June 4, Altaf left for the hospital with a kettle of tea to tide him through the night shift. The next day, his father Sheikh Mohammad Yusuf received the news that Altaf had been arrested. “Dilraj Singh of SOG arrested him and took him to Ganjoo house,” said Yusuf. “He was badly tortured. In the past too, the police had threatened to kill him.”

After Altaf was released on June 7, his sister told him to shift to Kupwara with her but his response was “Only if I will be alive by then to come with you”. A day later, Altaf’s two daughters – Shabnum Altaf (14) and Shaista Altaf (11) – took him dinner at the hospital. That was the last they saw him alive.

On the morning of June 9, Altaf was shot dead while he was heading home. Yusuf says the police had parked a few vehicles outside the hospital; it was also present at the entrance to the street that goes to his house. “The only lane that was left open by the SOG was the one he took,” said Yusuf. “Two men were waiting for him there and called out to speak to him. One bullet was shot first and then a volley of bullets, killing him instantaneously.”

On seeing Altaf’s body, his mother Haneefa kept her head on his legs and said, “You belonged to Allah and now you return to him.”

Fifteen years ago, Yusuf’s first son Sheikh Abdul Rauf was killed – by the armed forces, the family says – when he was returning from the Aligarh Muslim University after earning a doctorate. Altaf saw his brother decapitated, says Yusuf, and that image never left him.

“I only had two sons, two daughters are married off,” said Yusuf, while accusing the Indian government. He said that Defence Minister Manohar Parrikar’s recent statement on fighting militants with militants exposed the Centre’s policies. “The decision may have been taken long ago. The minister said it and next day it all began. The central government has the SOG with it, not the local police. This will take the youth back to '90s.” 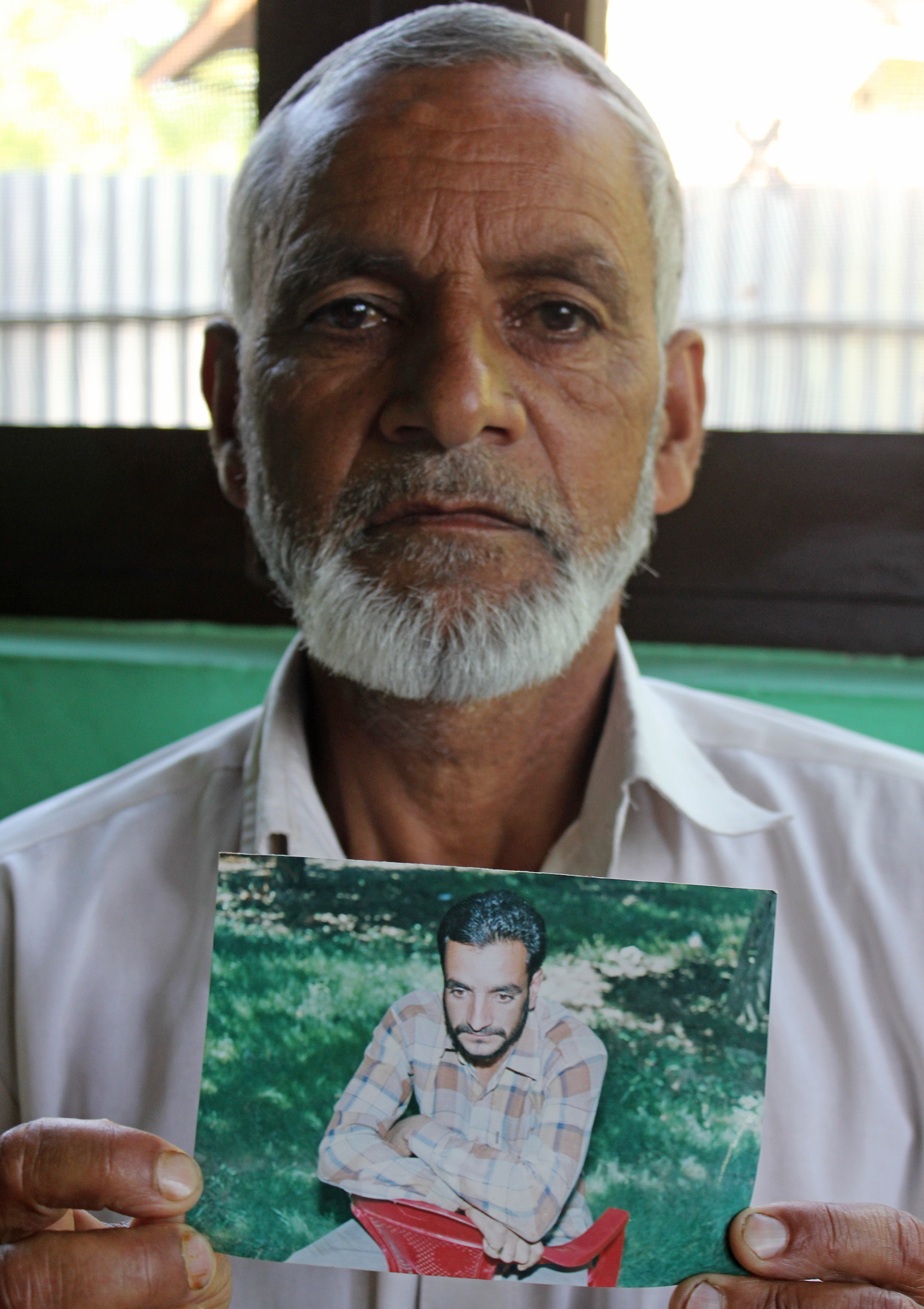 Khursheed Bhat used to run a provision store just 30 metres away from his house. Around 8.30 pm on June 12, he was walking back this short distance when, at home, his father Ghulam Nabi Bhat heard four gunshots. “We got worried,” Ghulam said. “After 15 minutes Tariq went to see if his brother is fine and check the shop.”

As Tariq left the house, he started calling on his brother’s cellphone. He could hear the phone ringing and in the lane he could see a twinkling light. He screamed as he saw his brother lying in blood. Khursheed’s bag was still there, but Rs 7,000 in cash and some cheques were missing.

Khursheed was dead by the time he was rushed to Sopore hospital. The people who gathered to pick his body say the police arrived at the spot in just five minutes.

“But even before the gunshots were heard, the army and SOG was present in the market,” said one of those men. “The police saw us taking his body to hospital but they didn’t ask us anything. The police station is 1.5 km away and the army camp is 10 km away.” 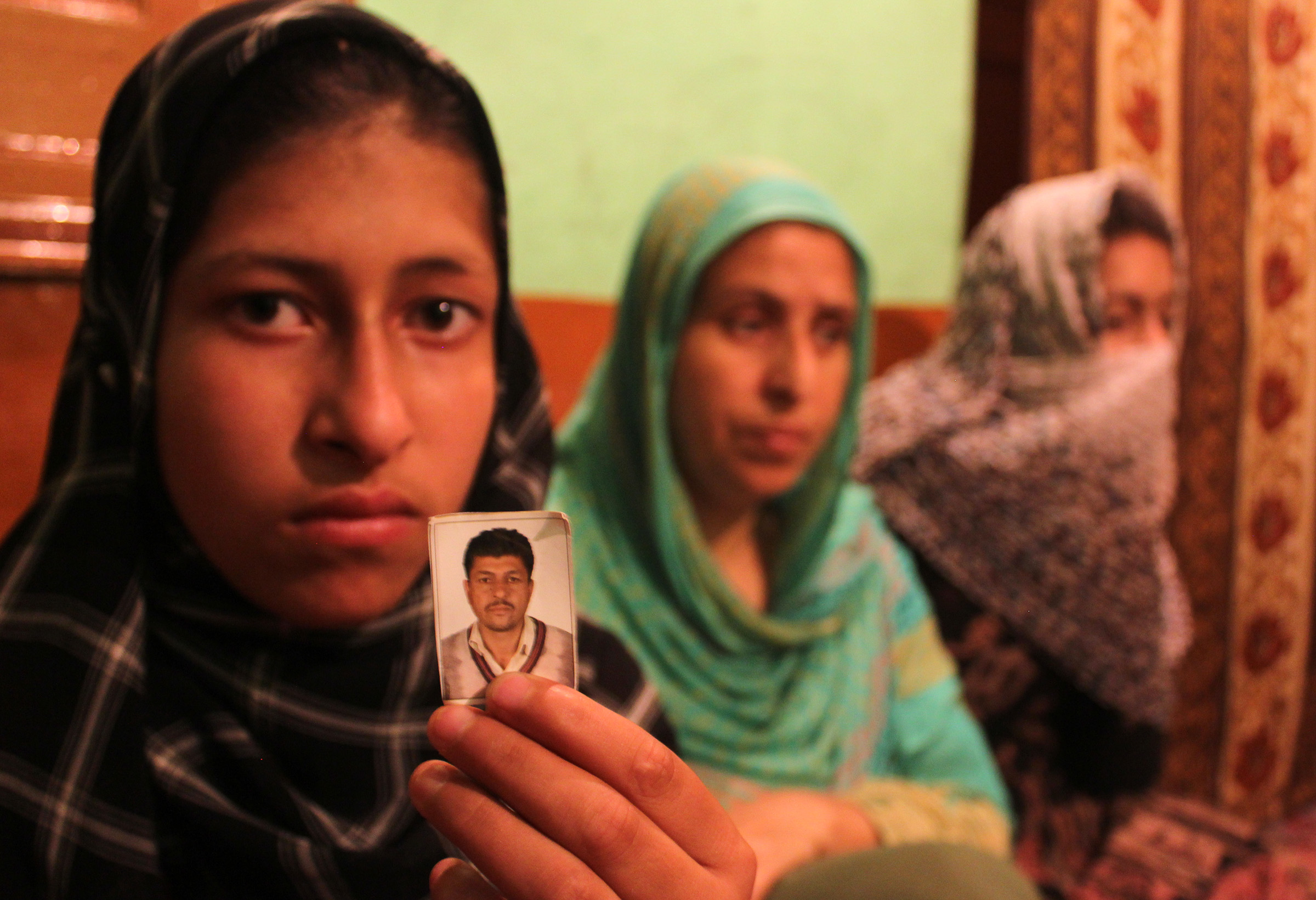 In the 1990s, Mehraj ud Din Dar was a Jammu Kashmir Liberation Front militant. After he laid down arms, Mehraj opened a chicken shop outside his house in Badambagh Sopore, which did well. He had two daughters – Sehrish Mehraj, 15, and Nisha Mehraj, 12.

On June 14 Sehrish had to leave for Uri for an entrance examination to get admission into Jawahar Navodiya Vidyalaya. Mehraj booked a cab for his two daughters and wife Zahida Begum and asked a friend’s son to accompany them. They left at 8 am, waving goodbye.

But before Sehrish could appear for the test, they were all asked to return home urgently – an aunt was unwell, they were told. Back home, Mehraj had been shot dead.

Outside the shop, gunmen pumped three bullets into Mehraj - one pierced his skull, the second his heart and the third his ribs.

The family claims that SOG and army vehicles were parked 50 metres away when the killing happened. “He was killed as an innocent,” said Zahida Begum. “Now they should kill us too.” 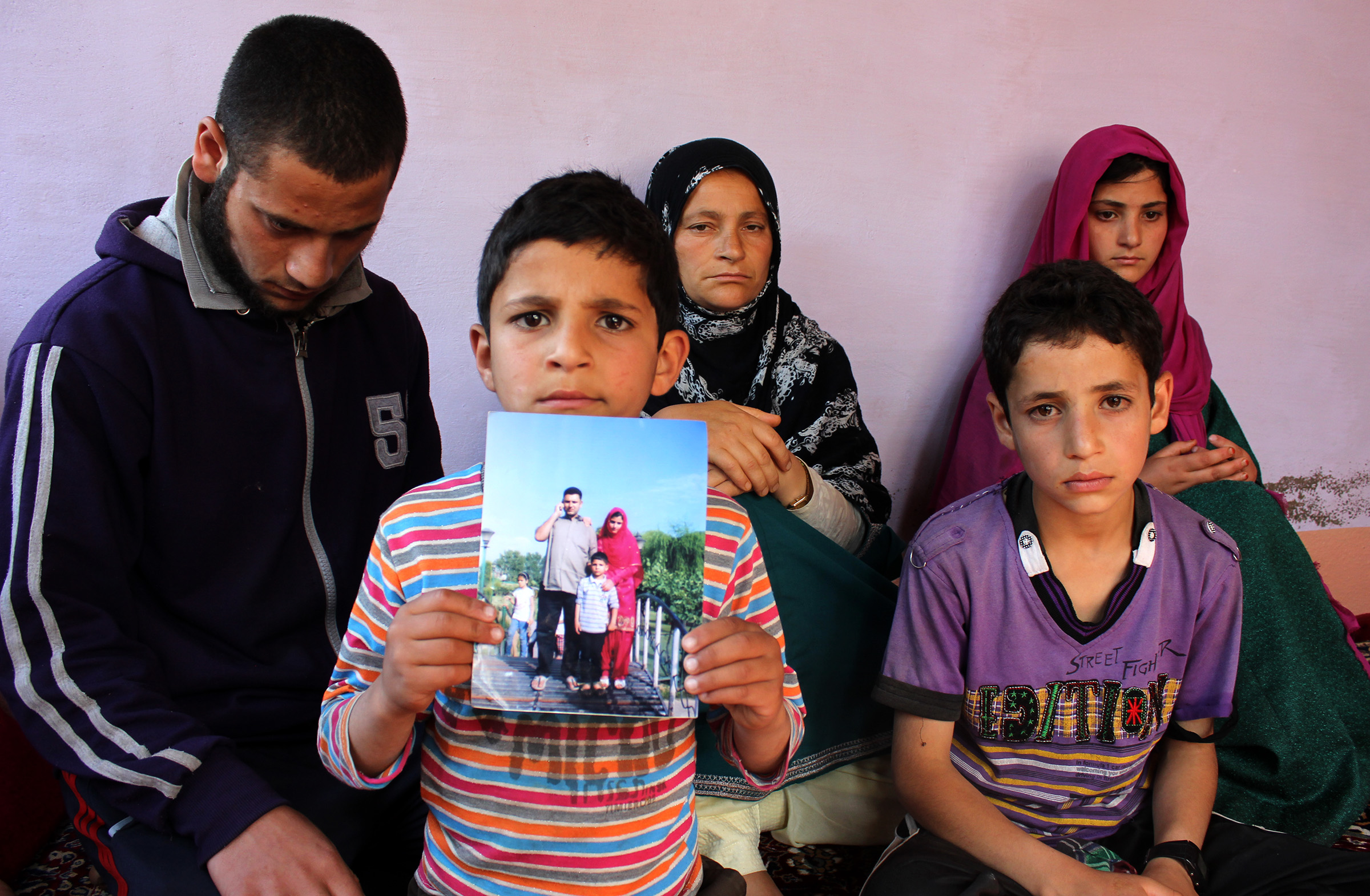 Born into a landed farmer’s family, Aijaz Reshi studied till high school. He married early and had four children, three sons and a daughter – Rehban, 16, Taqfeeq, 11, Ibrahim, 7 and Mehvish, 14. He took a three-room house in Mundhji Sopore and became an MGNREGA contractor. In 2006, he was arrested on the charges of being a Harkat ul Ansaar militant and thereafter the detentions and house searches never really stopped.

On June 15, Aijaz left for a medical lab just 50 metres away to get a thyroid and diabetes test. Later, during the day he had to attend a court hearing in his 2006 case. At 8.10 am, while Aijaz was waiting at the lab, two unknown men shot him twice – both bullets lodged in the skull.

His brother Mudasir says the night before this killing the army and SOG had camped in the outer parts of the village. “They made his life hell to live,” said Mudasir. “Militants would have never killed him. Not at all.”