Contribute Now
Ad
True story: While visiting his parents in the town of Naya Nangal in Indian Punjab, Aman, a resident of the UK, decided to take a look at Google Maps to check out the towns nearby. One of the results thrown up was Lahore. Curious, he asked Google Maps for driving directions from Naya Nangal to Lahore. This is what he got: 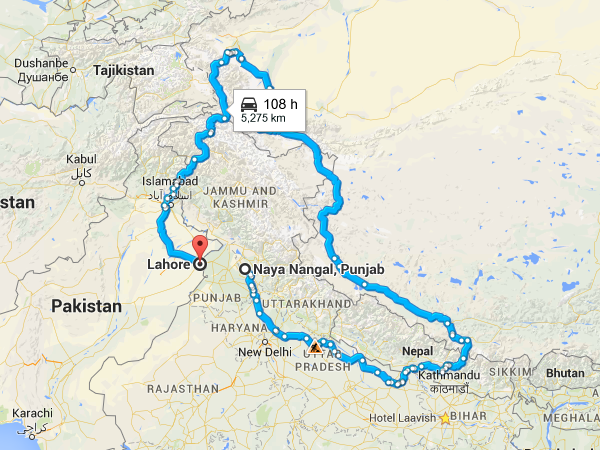 Geographically, Lahore is quite close: the distance between Lahore and Naya Nangal is less than that between Delhi and Chandigarh. The route is also quite conducive to road travel: the plains of the Punjab are as flat as a parantha.

But of course, there’s the matter of the Radcliffe Line – the bristling border between India and Pakistan – which cleaves through Punjab. It is an impermeable, if invisible, wall between Lahore and Naya Nangal. Always angry with each other, India and Pakistan do not allow vehicular traffic across their borders (unless they’re fighting a war and the vehicles are tanks).

To get to Lahore, therefore, Aman would need to take a more circuitous route. Rather than go west, he would have to travel east across Uttar Pradesh and take a left at Nepal. He would then have to motor across the highest mountain range in the word and drive across Tibet to Xinjiang in China. In Xinjiang, he would to take a sharp U-turn to enter Pakistan-occupied Kashmir and then drive down into the West Punjab plains and voila! Lahore!

To put that in perspective, the flying distance between Delhi and Athens – two cities on different continents – is shorter than that: 5,050 km.

If Aman decided to walk across the Punjab, however, he’d have to travel a great deal less: only 211 km. The only land border between India and Pakistan allows people to cross over on foot.

Google Maps, it seems, is only the latest observer since 1947 to have noted the madness of Partition and how it has bedevilled India-Pakistan relations since then.