Contribute Now
Ad
The Municipal Corporation of Gurgaon recently admitted before the National Green Tribunal that untreated sewage from the city mixes with treated wastewater in the drains into the Yamuna. The putrid river that flows through New Delhi is only one of the many severely polluted surface water bodies in the country. Government agencies estimate that as much of 80% of India’s surface water is contaminated and most of it comes from sewage.

The effects of this contamination are immediately felt with the onset of the monsoons. No sooner had the rains begun this year than reports of water-borne diseases like diarrhea and cholera breakouts trickled in from Delhi, Pune, Varanasi and Chennai as broken water pipes and flooding allowed fecal sludge mix into potable water. The story repeats every year as broken sewage systems across the country keep leaking.

The Central Pollution Control Board in 2009 calculated that major cities and towns together generate more than 38 billion litres of sewage everyday, of which only 30% is collected. Less than 20% of this is treated because that’s all the treatment capacity available. The rest is just emptied into rivers, lakes, seas and ponds.

A soon-to-be-released report by WaterAid India on fecal sludge management documents the chinks in India’s sewage system. Seventeen million, or roughly 20%, of urban households, lack sanitation facilities, the report says. Among those that have access to sanitation only 32% are connected to a sewage network, the rest depending on septic tanks and pit latrines. There are more numbers to raise a stink about. More than 5 lakh pit latrines are unsanitary, being nothing more than open pits. More than 9 lakh toilets empty directly into drains. Among the 18% of urban household that don’t have access to individual toilets, more than 12% resort to open defecation.

The story gets murkier beyond the numbers. Where sewers exist, they often leak or overflow. Instead of being cleaned every few years, septic tanks are left to accumulate fecal sludge that percolates into ground water. When the tanks are cleaned the black water is disposed off in fields and water bodies, once again contaminating open fresh water.

The WaterAid report looks at sanitation systems in six states and offers a snapshot of how much wastewater is dumped untreated. Delhi, for instance, uses 4,346 million litres of water per day of which 87% returns as waste. However, Delhi has the capacity to treat only 61% of the total wastewater it generates. The 51 class I cities in Maharashtra together consume three times as much as Delhi does, turn 80% of that into sewage and treat less than half of their total wastewater. The statistics are far worse for class II cities. 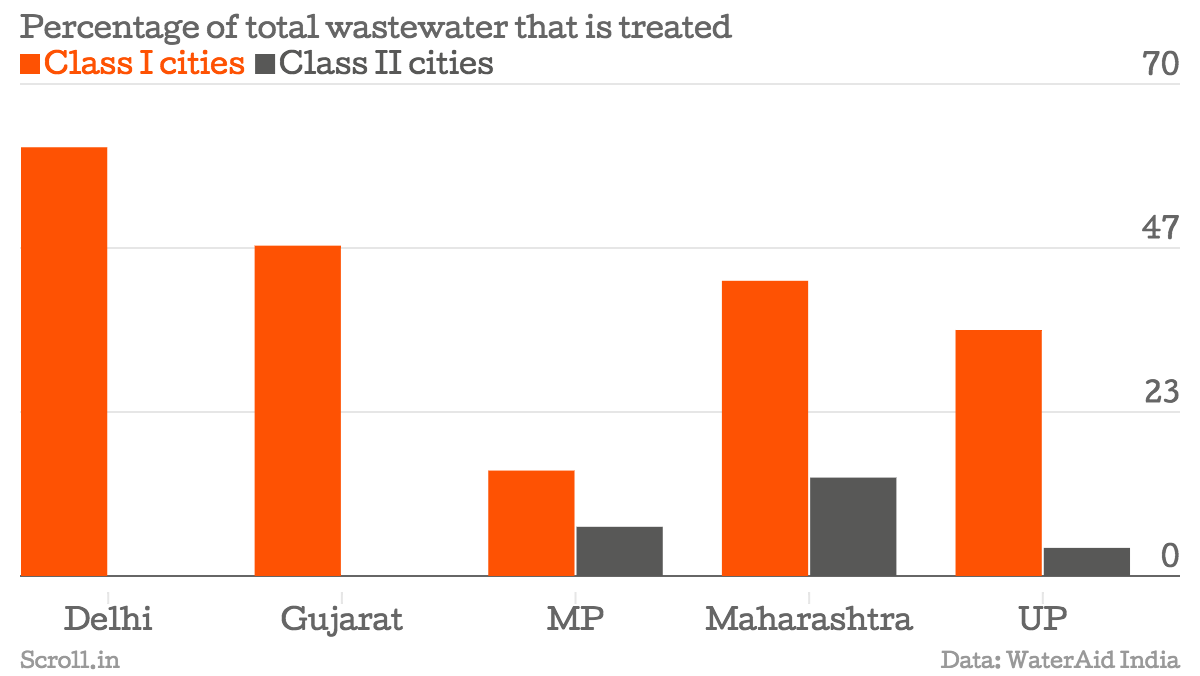 Even with the creation of the National Urban Sanitation Policy in 2008 and several thousands of crores being spent by states on sewage networks, the problem has grown worse in the last five years. A CPCB assessment this year found that the number of polluted rivers in the country has doubled since 2009 from 127 to 275 with 302 polluted river stretches in all. The board observed that 650 cities along these polluted river stretches generated 62,000 million litres of sewage everyday while their capacity to treat the sewage was a dismal 38,000 MLD.

The WaterAid report recommends enforcing a national building code, public promotion campaigns and decentralizing sewage treatment plants as remedies to the sewage problem. Water experts, for years have been calling for freeing up the flow of rivers to allow them to rejuvenate. So the good news for the moment is water resources minister Uma Bharti's announcement on Tuesday that no new dams will be sanctioned on the Ganga if the project interrupts flow of the river.