Contribute Now
Ad
On Tuesday night, a small storm began to be raised about edits to the Wikipedia page on Jawaharlal Nehru claiming that India's first Prime Minister Nehru was born in a former brothel and more baffling, that his family had deviously hidden their descent from the Mughals by claiming to be Kashmiri Pandits. These edits seemed controversial because they seemed to emerge from a government of India IP address.

Bizarre conspiracy theories about the Nehru-Gandhi family are fairly common, but the fact that this has come from an IP address registered with the National Informatics Centre, the government's internet provider, was enough for the Congress and its allies to make an issue of it.

However, the record shows that government employees are active and vehement editors of Wikipedia. Their preoccupations – television, cinema and parochial history – give an interesting insight into the minds of people who evidently do not have enough work and too much time on their hands.

Since August 25, Twitter handle @AnonGoIWPEdits has been tracking and tweeting anonymous edits made to the collaborative online encyclopedia Wikipedia from internet protocol addresses associated with the government of India.

The @AnonGoIWPEdits  handle seems to be inspired by @parliamentedits, a Twitter bot handle started last July to track edits made within the United Kingdom’s parliament netblock, or group of IP addresses. The UK handle’s developers subsequently made their code available in open source on Github, leading to dozens of handles from Canada to Pakistan that track government employees obsessed about Wikipedia.

Most edits are mundane government duties, such as informing Wikipedia’s readers that the fare of the Hyderabad metro has increased by one rupee, or that Maxi cabs are now available for public transport in Kolasib, Mizoram, instead of jeeps.

But one cannot expect anyone online to stay focussed for very long, which is why we now know what government officials are far more concerned about – TV shows, movies, and the past. Scroll.in used an IP locator to track some of the more bizarre edits, which often reveal as much about Wikipedia's lax editorial control as about the people employed by the government.

On Dilip Kumar's birthday, for instance, a staffer near Washim in Maharashtra decided to bump up the actor's age by a few years. For a few hours, Wikipedia announced incorrectly to the world that the 92-year-old star was actually 99. Given the amount of interest in his birthday, it was not surprising that this was corrected soon.

Another government  worker with an IP address in Bangalore is a huge fan of Kannadiga film star, Vishnuvardhan. Vishnuvardhan’s Wikipedia page is already adulatory – it has an entire sub section titled “Dr.Vishnuvardhan's Respect towards women”. But the employee in question was not satisfied.

Convinced that the actor’s merit must spread far beyond his page, this Bangalorean babu has painstakingly inserted Dr Vishnuvardhan's name and obscure film titles into the Wikipedia pages of at least seven major and minor South Indian female actors’ pages, from Madhavi to Rupini.

Bajatey Raho, the terrible mid-2014 Bollywood comedy did not seem a likely candidate to inspire attention to detail, but a government employee in Patna clearly felt deeply enough about it to sabotage the Wikipedia entry on it  by incorrectly increasing  the length of its most famous song, Nagin Dance, by seven whole seconds. Wikipedia’s sharp-eyed editors do not seem to have noticed yet.

Others are more juvenile. On September 9, a disgruntled Bhopal moviegoer added “ki ma ki” after Tevar in a list of Bollywood movies scheduled to be released. Tevar, which stars Arjun Kapoor, opened only on January 9, so it is unclear what could have offended this Madhya Pradesh officer.

A user in a government office in rural Maharashtra has  edited an article on the Shakti Peethas, or places of worship dedicated to Shakti or Sati, to insist that the information is in the realm of "history", not “mythology”.

With cinema, religion, history and mythology covered, there must also be jingoism. On August 28, a day after yet another skirmish on the India-Pakistan border, a babu from Tundla in Uttar Pradesh updated the military history of Pakistan to say “all the area is disputed by the China and Pakistan”. That edit, however, was swiftly removed. 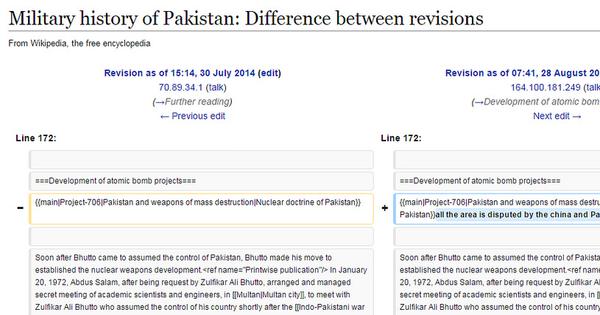 Even so, compared to other government employees, the editor of the page on Jawaharlal Nehru was unusually specific and seemed to have a personal grudge if the person's full edit is anything to go by:

In fact both Nehru and Jinnah were paramours of Edwina Mountbatten, who blackmailed them with their sexually explicit nude photos with her in the bed and made them sign the partition papers. Edwina never slept in bed with her husband Lord Mountbatten, who was a gay, anyway. She was married to him only to gain access to the powers that be and armtwist the the two leaders to agree to partition.