Contribute Now
Ad
Pakistani book illustrator and author Rumana Husain comes out with interesting and  unique ideas. With many colourful books in her kitty and an off-the-beaten track coffee table book Karachiwala (which dealt with people from different ethnic and geographical backgrounds now living in the city where the writer was born) under her belt, Husain has now come out with a profusely illustrated book consisting of short write-ups on people – men, women and children – who make their living on the streets (and in one case, on the beaches) of Karachi.

She has titled it Street Smart: Professionals on the Street, and has included people pursuing different professions – from driving rickshaws and mini buses to donkey carts, and from selling fruits and vegetables to vending newspapers.

There are some who have fixed places like stall owners, or even unofficially designated spaces like those of newspaper vendors. Then, there are others such as the vegetable sellers, who are constantly on the move.

Some are following the professions of their ancestors, while others have moved onto fresher and greener pastures.

Some like the pinjaras (cotton wool fluffer) are no more to be seen, there are some like the qalai wala (tin smith) and the bhishti (water carrier) who are on the verge of falling into oblivion. 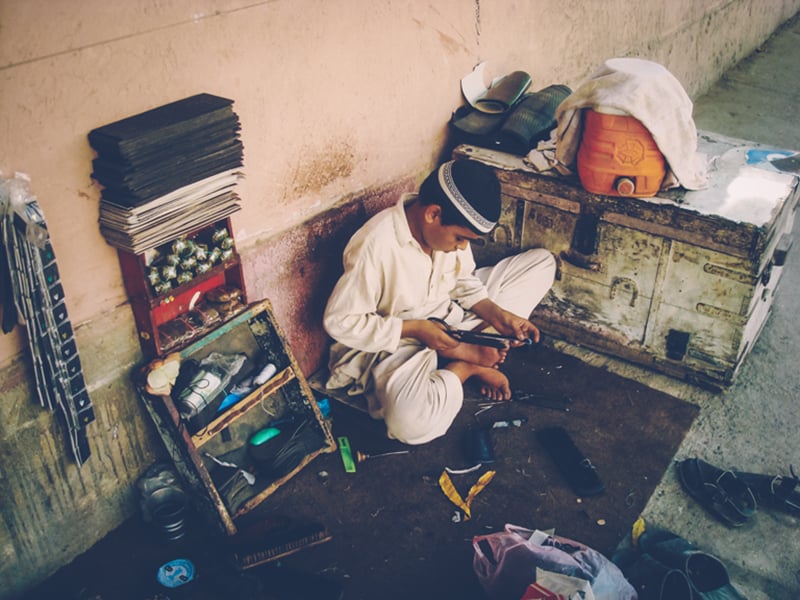 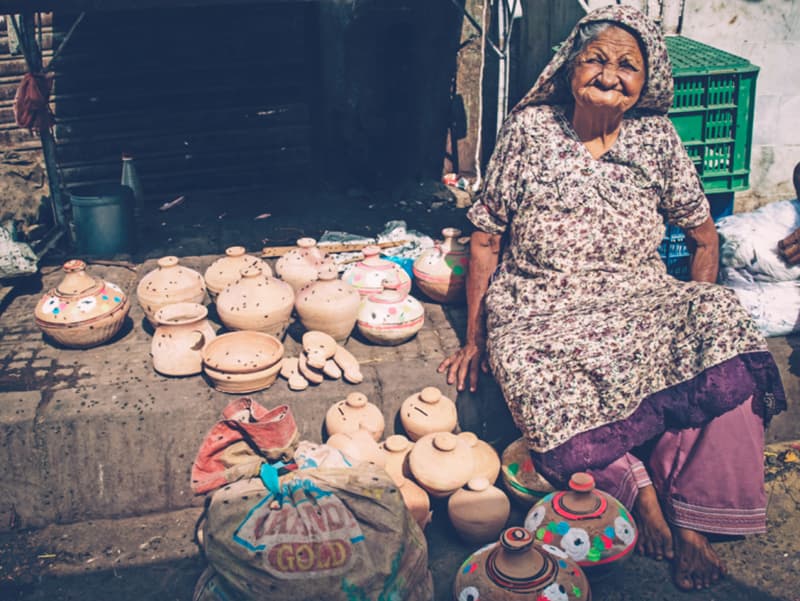 Mariam Ahmad, the potter sets up an open-air stall on a footpath. 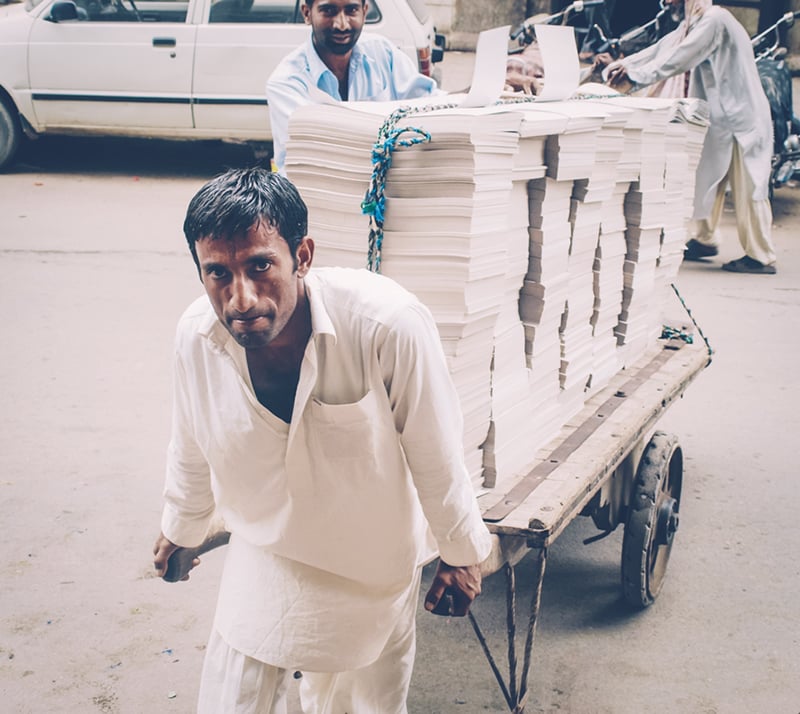 Qadeer Ahmad, the handcart puller jointly owns the cart with his brother.

Some have been replaced. A case in point is the postman, whose workload has been to a very large extent been taken over by the delivery men of courier services. Some have been modified. For instance, the bahar wala of Irani restaurants is still there but his area of operation is fairly restricted. The men who deliver food from residences to workplaces have also dwindled in numbers.

On the other hand, the young men who deliver delicacies from fast food joints, introduced by multinationals, are increasing by the day. Now, even Pakistani restaurants, from the high-profile Barbeque Tonight to the modest Student Biryani, have begun to rely on the members of this tribe. 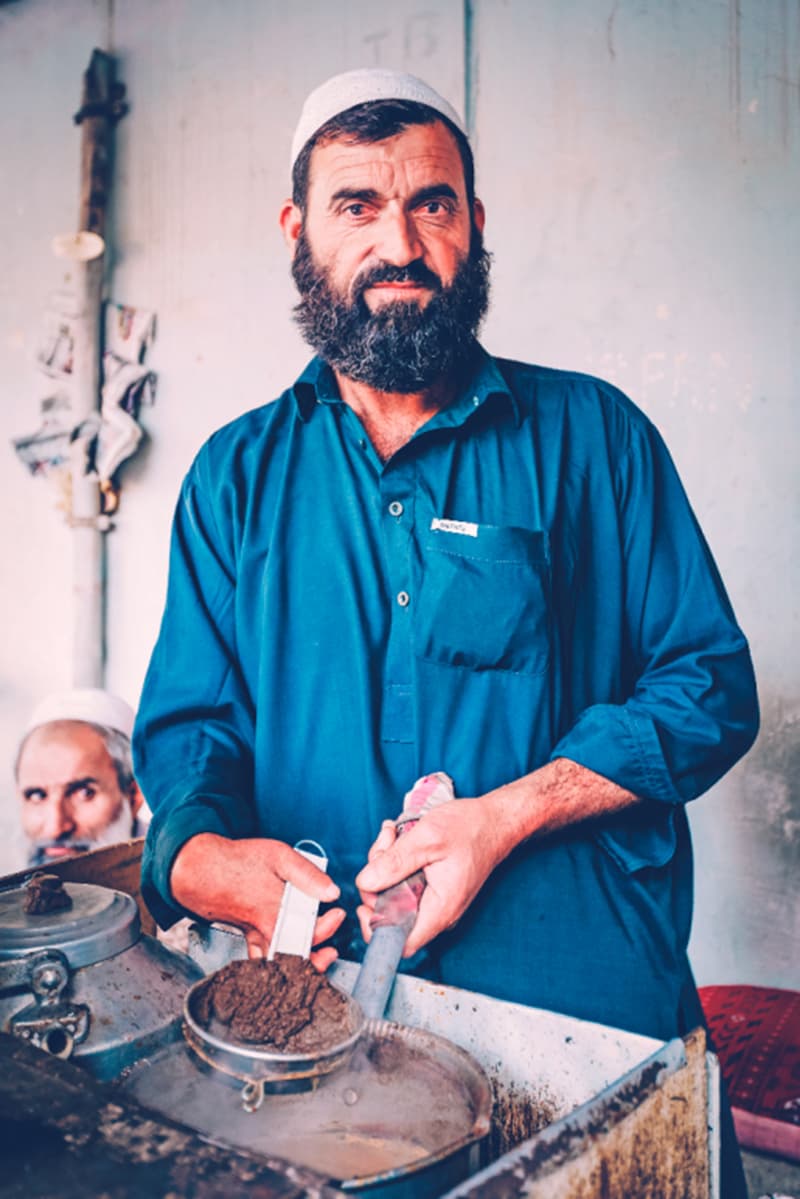 Bashir, the tea seller is a soft-spoken Pakhtun who runs a roadside tea-shop in Saddar. 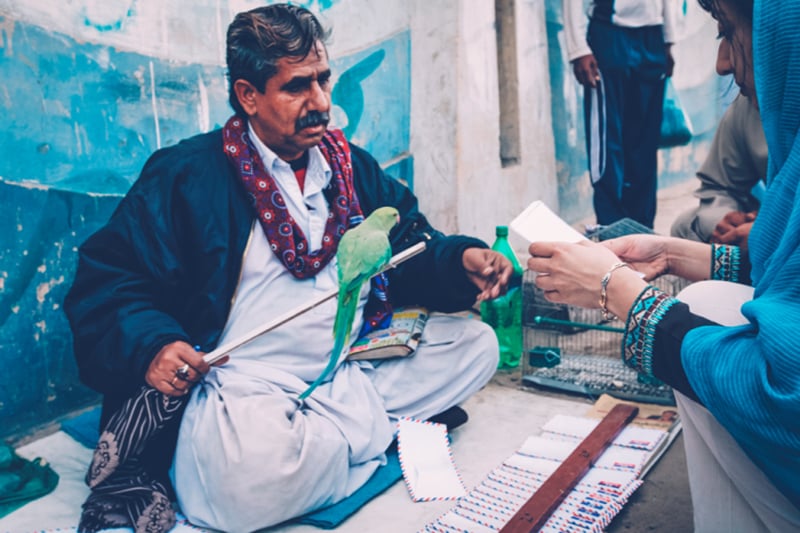 Aslam Shirazi, the parrot fortune teller sits on a footpath with his parrot from 9 am until 9 pm every day.

There is, however, one incorrect title – the bird trapper. The fact remains that the birds, mostly sparrows and sometimes mynahs, are trapped by people in the fields. They sell the captive feathered creatures to wholesalers in Empress Market, who in turn sell the unfortunate birds to hawkers. They are to be seen at traffic signals. People who want to do a good deed pay the hawkers and have the birds released, not realising that by doing so they are encouraging this inhuman practice. 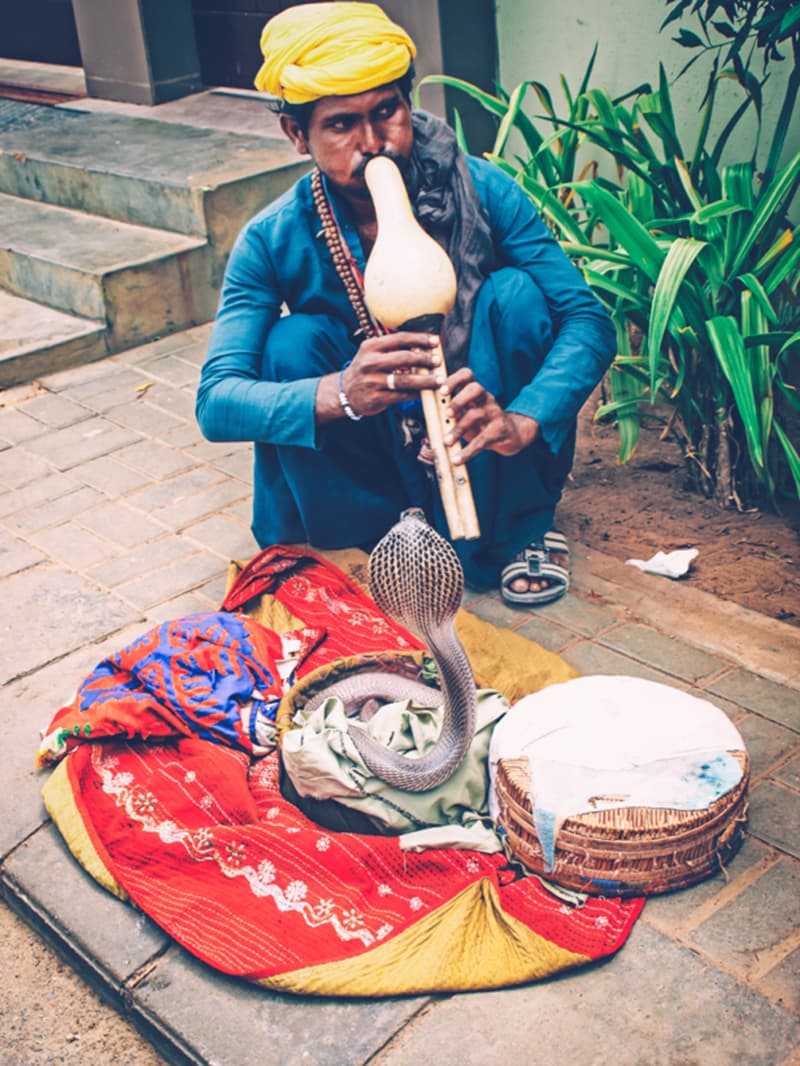 Misri Jogi, the snake charmer first hypnotises snakes, then pledges to them that he will not harm them. 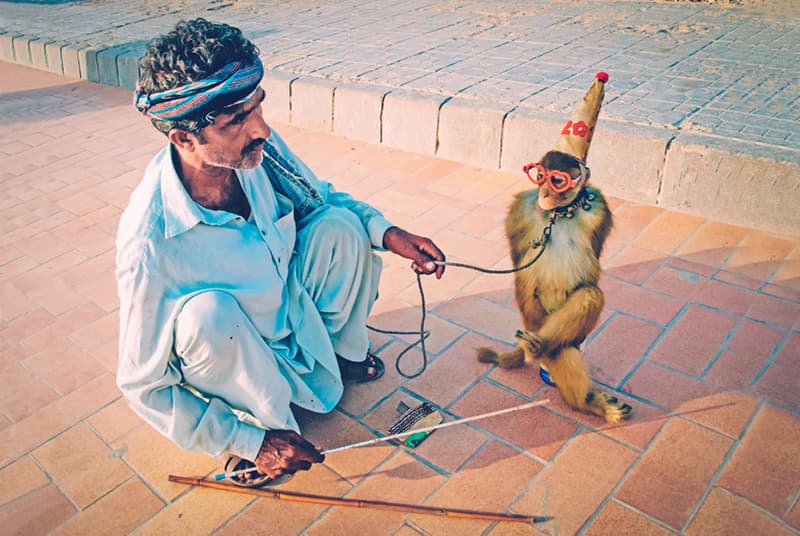 Mahmood, the monkey show performer can be seen at the beach.

The ones whose pictures could not have been taken are pickpockets, carjackers and the most dreaded ones who deprive you of your wallet and cellphone; and sometimes, if you resist, they may pull the trigger without giving it a second thought.

The photographs are generally interesting, but some lose their charm when the people featuring in them are seen looking at the camera. The most unnatural of the pictures is one where the watch vendor, his clients and some bystanders, give the impression that they are posing for a group photograph. But, on the other hand, there are people like the roadside typist and the elderly key-maker who look absolutely natural, for they are too involved in their work to look elsewhere. 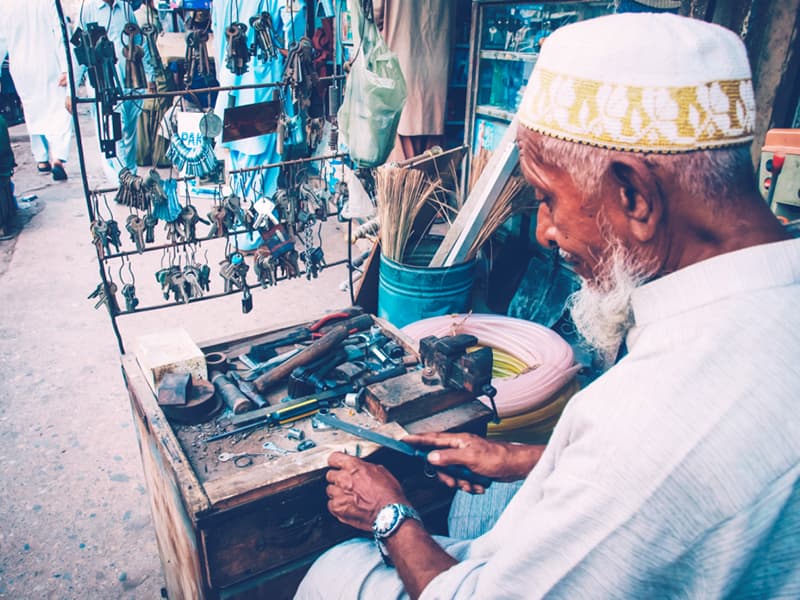 Husaini, the 60-year-old key maker has been making duplicate keys for the last 30 years. 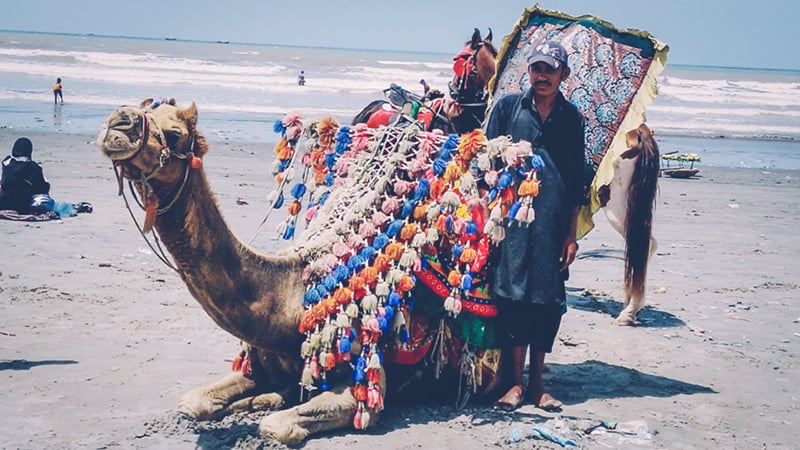 Shabbir Ahmad, the camel driver is a student of class 10. After school, he immediately heads to the beach with his camel.

All said, the pluses in the book heavily outnumber the minuses. Seasoned journalist Ghazi Salahuddin, who acquainted himself with the city where he has spent almost his entire life by walking through its streets with his eyes and ears open, sums up the book aptly when he writes in his introduction:

“Diversity is the secret of every prosperous, culturally vibrant and creative society. This is what Karachi must learn and Rumana is one of those creative individuals who are facilitating the process of learning.”

This article first appeared on Dawn.com.