Contribute Now
Ad
The frequency of heat waves in India since 1951 has increased, a trend that is likely to continue, recent research indicates.

This summer, more than 2,000 people in India died from the scorching heat, most of them poor, old or working-class. More than a third died in Andhra Pradesh and Telangana. But large regions of southern India and the east and west coasts, which are now unaffected by severe heat waves, will be severely affected after 2070, according to a study by Subimal Ghosh and his colleagues at the Indian Institute of Technology in Bombay. Extreme heat waves will occur earlier in the year, in the worst case in early April, the study also concluded. They looked at temperature data between 1969 and 2009.

The number of heat waves has increased all over the country except for pockets in the north-east and West Bengal, according to another study, by Vimal Mishra, assistant professor at the Indian Institute of Technology, Gandhinagar, and his colleagues.

“In a lot of areas that had one or two heat waves in the period of 1951 to 1981, the heat waves have increased to between three and five between 1981 and 2013,” Mishra said. “A significant increase in the number of heat waves has occurred in central India, like in parts of Madhya Pradesh, Chhattisgarh and also some parts of southern India like Andhra Pradesh.”

The harsher and more numerous heat waves will probably cause a significant rise in heat-related mortality in India. In a world hotter by three degrees, the death rate will rise by more than 70%, according to Mishra's study. If greenhouse gas emissions continue at the current rate, poverty persists and climate technology does not mitigate the other factors, we could see a six-degree rise in temperature by the end of the century and a 140% increase in heat-related deaths. 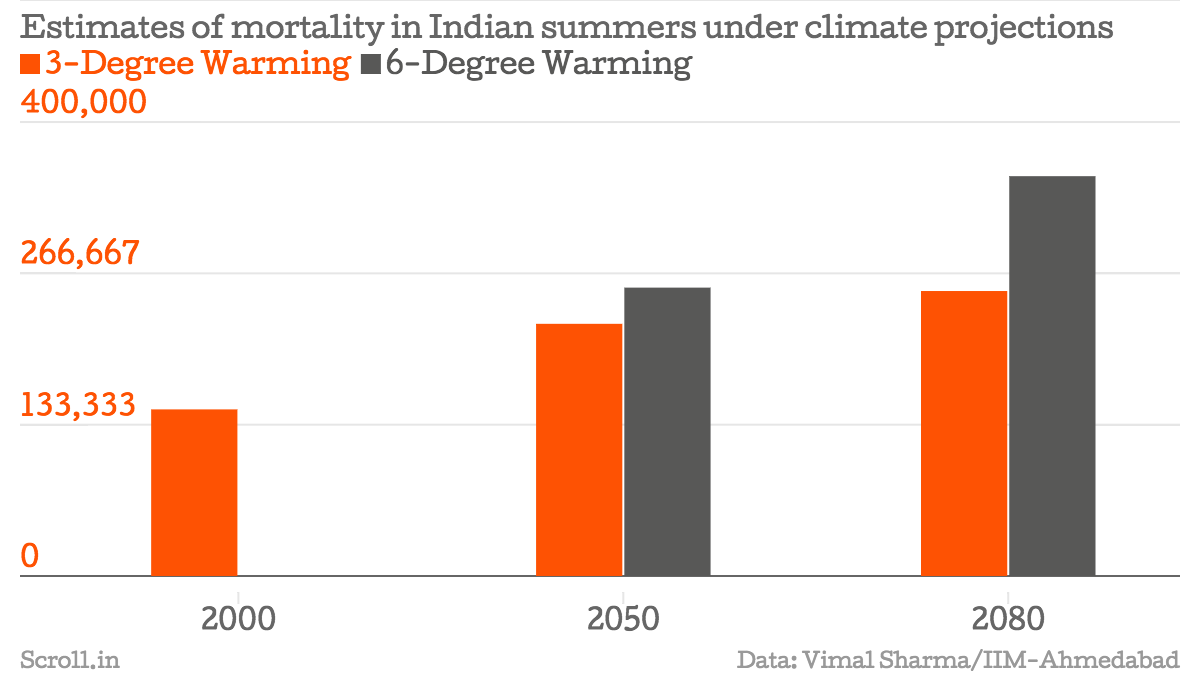 In a parallel study, Mishra found that urban areas in India, which house about 13% of our population, would be worse affected than the average but acclimatisation to heat over the long time period could reduce mortality.

“There are so many implications for the population that we are not able to visualise them now,” Mishra said of the heat projections. “Food prices will shoot up with one drought. It will be so hot that labourers cannot work outside for four to five hours.”

In its fifth assessment report released last year, the Intergovernmental Panel on Climate Change listed heat-related deaths as a key risk for all of South Asia, based on observations of the past century. The report recommends building heat health warning systems, better urban planning to reduce heat islands and having new work practices to avoid stress among outdoor workers.

“Warming has occurred, at a country scale, across most of South Asia over the 20th century and into the 2000s,” it said. “There were more temperature extremes. Records indicate that it is likely that the numbers of cold days and nights have decreased and the numbers of warm days and nights have increased across most of Asia since about 1950. Heat wave frequency has increased since the middle of the 20th century in large parts of Asia.”

Scientists from the Indian Institute of Tropical Meteorology in Pune have linked the unrelenting summer warming to changes in atmospheric circulation, but the jury is out on the exact mechanism.

This is the second part in a series about climate change.  The first part can be read here.