Become a Member
Ad
China’s market downfall has been dramatic and painful for the investors involved. But so far there has been little immediate impact on the rest of the world, because China tightly limits foreign investment in mainland stocks.

China’s stock markets are, for the most part, a mom-and-pop affair ‒ about 80% of the trading that happens in Shanghai and Shenzhen is done by Chinese individuals. They represent at most 14% of the total Chinese population.

But there’s little doubt the effects of this downturn will be felt globally ‒ it just may take some time. After all, Chinese investors have lost more about $3.4 trillion in equity value from the markets mid-June peak until the July 7 close. 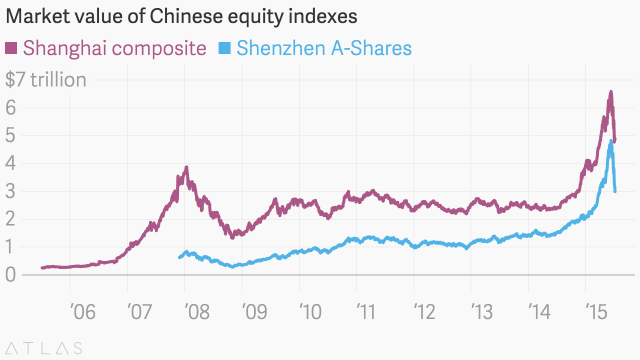 And although the government is supporting state-owned companies in the markets, other companies have seen their market value plummet.

As of July 8, about half of the stocks that traded in Shanghai and Shenzhen have voluntarily halted trading indefinitely ‒ which potentially puts the brakes on everything from corporate expansion plans and spending to the pay their executives take home. And they’re merely suspending stock losses that these companies will have to take eventually.

How far could global contagion spread, and where could it go? Here are some trouble spots to watch:

Tanking markets are putting foreign banks that have been active in China for years in a tough spot. China’s state media pounced on Morgan Stanley for urging investors to steer clear of Chinese stocks in a June 26 note. Rumors are flying that short-selling “foreign crocodiles” and “foreign devils” are to blame.

Never mind that foreign investors own less than 1% of mainland stocks, according to Bank of America/Merrill Lynch. Or that the few foreign investors Beijing allows to trade A-shares aren’t even allowed to sell short; or that the Shanghai-Hong Kong Stock Connect caps the number of securities (paywall) that can be sold short to a teeny percentage.

More than creating a temporary headache for Morgan Stanley, the accusations could be used to keep the bank off of lucrative China-related business with state-owned companies for years to come ‒ even though it was the right call on mainland stocks. Others including Bank of America and Credit Suisse identified China’s market as a bubble as well.

Foreign banks have lent over $1 trillion to Chinese public and private companies as well, with the majority of that concentrated in Hong Kong, UK, US and Japanese lenders.

Foreign hedge fund investors, meanwhile, have billions of dollars in exposure to China stocks through direct investment and Exchange Traded Funds. Less than two months ago, many were racking up double-digit annual returns, thanks to the stock market bubble. While some had started to speak of “frothy” valuations in May, others felt the China growth story was strong.

An end to China’s financial “opening up”

A key part of president Xi Jinping’s plan for China has been the opening of China’s financial system. China needs foreign banks to assist with this opening up, and it needs foreign investors to be comfortable with Chinese assets, including RMB-denominated financial products that are key to internationalizing China’s currency.

Beijing’s reaction to the stock market decline could stymie much needed financial reform, and scare foreign investors from China’s markets for years to come, analysts and financial experts say.

“Unfortunately, it looks like the authorities are putting some of the blame on short-sellers and even foreign conspirators,” Victor Shih, professor at University of California, San Diego, tells Quartz. “This will delay serious reform in the financial market, such as an expansion of share borrowing and enlarging foreign portfolio investment, for some time.”

That will halt the slow but steady peeling-open of China’s financial system ‒ something crucial to creating a less speculative stock market down the road, and introducing new liquidity channels to keep the China’s banking system moving.

China’s heavy-handed stimulus measures since the markets started falling have added hundreds of billions of dollars worth of liquidity to the market. But rather than reassuring foreign investors, they’ve been heading for the doors ‒ foreign exits of mainland stocks through the Shanghai-Hong Kong Stock Connect hit record highs this week, Bloomberg reported.

The Chinese government’s support is “being perceived as negative by foreign investors, as the A-share market is being viewed as rigged and not a true market,” Francis Cheung, CLSA’s head of China and Hong Kong strategy told Quartz.

“It is one thing for people to tacitly accept strong government presence [as foreign investors have in the past]. It is another to essentially witness it in the brutal financial market sense,” Balding tells Quartz. “This debacle, even if the market bounced back relatively quickly, is going to leave a deep impression on domestic and international investors.”

It also stands to damage Beijing’s chances that the IMF will add the yuan to its basket of reserve currencies, which would have invited more inflows of foreign liquidity. Paradoxically, this goal was probably one of the reasons behind the government’s all-out market stimulus package.

Chinese consumers have become the world’s powerhouse when it comes to spending on luxury goods, tourism, property, and international schooling.

It is impossible to know how much of this spending has been fueled by stock market gains, rising incomes, proceeds from corruption, or property market windfalls ‒ and the market really only started rising in recent months. Some were even delaying buying new cars to put money into the stock market, as the Wall Street Journal reported last month.

But investors said recently that stock windfalls helped them fundoverseas travel, property purchases, and car buying. Because trillions of yuan of stock-buying was done with so-called margin finance, or loans used to buy stock, so investors who are losing money are going to need to curb spending even further to pay these loans back.

* Tourism: Chinese tourists spent more than those from any other country on overseas travel last year ‒ a massive $165 billion, up 28% from the year before. And their impact on major cities is massive.
Tourists from Beijing alone spent $1.4 billion in New York City last year, as Quartz previously reported, and those from Shanghai spent nearly $900 million in Los Angeles. In London, they accounted for one-fifth of all spending in the West End and in Thailand they’re much-maligned but still expected to bring in $5.6 billion this year.

* Luxury goods: Chinese also buy 12% of the world’s luxury goods, with most of that shopping done overseas, where they accounted for 40% of France’s luxury good sales last year.

* US, Canadian, and Aussie schools: Nearly half a million Chinese students studied abroad last year, up 11% from 2013, and 92% of those paid their own way, rather then relying on financial aid or scholarships. These students have been a windfall for universities and private secondary schools, particularly in the US, Canada, and Australia, the top destinations.

* Property: Property markets from New Zealand to Los Angeles have been boosted by billions of dollars in Chinese investment in recent years. These buyers have snapped up suburban homes and penthouse apartments, often paying cash.

These households most likely to be spending on overseas property, education, and travel are the ones that dabble in the market.

China’s stock market are the “plaything” of a limited number of households in China, financial services company GaveKal said in a recent report. “The pain of the crash is affecting probably no more than 20mn to 30mn Chinese households, most of which range from upper middle class to very wealthy.”

Hong Kong remained the top investment destination for wealthy mainlanders last year, and Chinese investors’ stock market losses are sure to bite here. But a bigger concern than property or shopping is the effect on businesses in Asia’s financial capital.

Hong Kong’s stock markets have already been whip-sawed by moneyfrom China in recent months, and as China’s markets sank, they have too.

On Wednesday, Hong Kong’s Hang Seng index sunk more than 8%, to its lowest level since the Shanghai-Hong Kong Stock Connect, linking Hong Kong and mainland markets, opened. It was the index’s worst one-day performance since the financial crisis of 2008.

Stocks of Hong Kong-based banks and brokers are plummeting, and dozens of Hong Kong stocks have voluntarily suspending trading as well to try to sit out the downturn—putting their own expansion plans and company operations at risk. 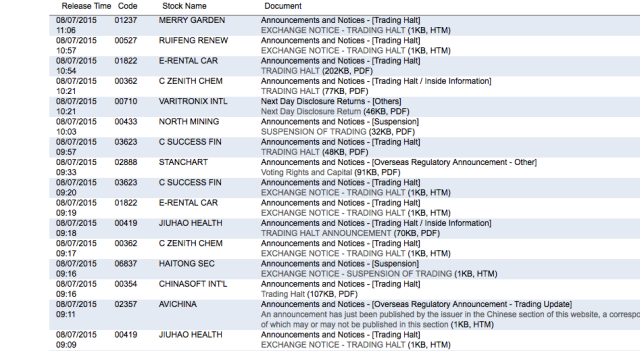 China internet giants Weibo, Sina, Youkou, and Sohu.com all dropped significantly this week in US trading. While these companies have a different set of investors than China-listed internet and tech stocks, their business is nearly all in China, which seems to be giving investors pause: 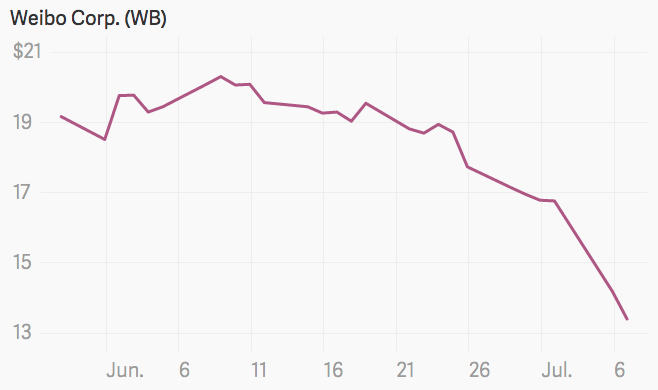 Tech companies that announced buyouts to leave the US markets, and re-list in China, are being punished severely. US investors are responding to their desire to leave US markets by leaving their stocks.

In a worst-case scenario, these downturns could leak over into the non-China tech sector, as investors burned by losses seek less-risky investments.

A plummeting stock market could drag the economy down with it, though it’s hard to gauge how deep the impact will be.

Brisk business for the domestic financial services sector has buoyed the economy in the last three quarters; a stock collapse could shave around a percentage point off GDP growth, according to Capital Economics.

Chinese corporate profits will likely take a hit too. Over the last year, the stock market was the lone guaranteed way to make money in China, drawing in corporate funds as well as retail investment.

A market nosedive will certainly endanger China’s financial system. A sharp fall could trigger a wave of defaults as companies and individuals that have used loans and savings to bet on stocks go bust. This could eat a big hole in bank balance sheets, notes Andrew Collier, head of Orient Capital Research.

It’s hard to tell just how big that risk is, though. The margin trading frenzy has already shifted what David Cui, strategist at Bank of America Merrill Lynch, estimates could be as much as 6 trillion yuan ($970 billion) in borrowed money into the market, putting the equivalent of nearly 10% of China’s GDP at risk. 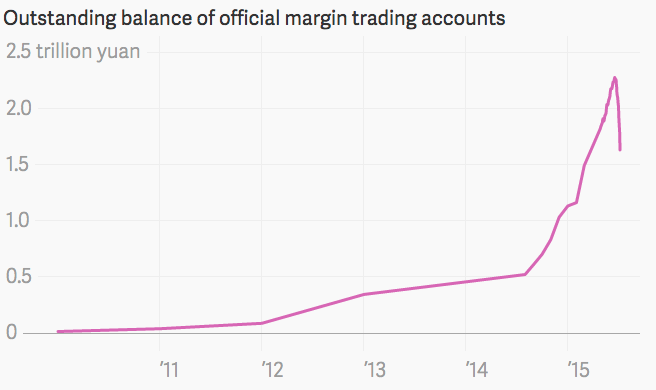 The ultimate question is what impact this could have on Xi and the government he leads. By urging households to buy stocks, Xi has put his credibility ‒ as well as that of the Communist Party ‒ on the line. The stimulus measures’ failure may incite outrage among those very mom-and-pop investors who have lost everything. Though it’s impossible to tell what might ignite it, mass social unrest in China would shake the entire world.