Become a Member
Ad
The Ability Unlimited Foundation works out of a little room in a dilapidated building in the bustling heart of old Delhi’s Patparganj. The room is crammed with steel trunks, stage props and more. The walls are covered with photographs and posters for dance shows.

A group of boys, all of them in wheelchairs, welcomed me with warm smiles. They were in the midst of rehearsing for a show, and were sweating it out. A noisy but dysfunctional air cooler and a few table fans struggled to cool the room in the merciless summer heat of 45 degrees.

“Let me offer you a chair,” said Syed Sallauddin Pasha, who started the Foundation, which works with disabled children through theatre. A wheelchair was drawn in for me to sit on. “The whole idea is to make you feel like one of them. I myself like to go around the place on these wheelchairs,” he said. My initial discomfort and awkwardness eventually evaporated.

I had visited a few days after International Yoga Day, on June 21, when Pasha and his troupe of disabled boys and girls had put up a show at Mandi House in Delhi, working for the first time with a live orchestra.

Pasha was born into a family of traditional healers in Anekal, a hamlet near Bangalore. At an early age, Pasha took a liking to classical dance. Much against his conservative family’s wishes, he began training in Bharatanatyam. After his initial training, Pasha enrolled at the Natya Institute of Kathak and Choreography, started by the late Maya Rao. It continues to be India’s only institution offering a degree in dance.

Pasha learnt choreography under the able guidance of Rao. As an excited student, Pasha created a miniature of a hall described in Bharata’s Natya Shastra. This has been used as reference material by hundreds of students who have graduated from the institute over the decades. Pasha also gained mastery over yoga, martial arts and Sanskrit. “I felt the need to understand ancient scriptures like the Vedas,” he said.

He also developed an early sensitivity to the disabled. “Our society can be very cruel,” he said. “I remember seeing disabled children being teased in my village. People would tie an empty tin to the leg of a deaf or mute boy and make him run around and laugh at him. He would weep for days. These images disturbed me a lot.”

Pasha eventually moved to Delhi, where he set up the foundation and began training physically disabled children. Using dance as a medium, Pasha developed his work into what he calls “therapeutic theatre”.

When he began training children in dance, he realised the tradition’s shortcomings. “The Natya Shastra dictates that a dancer’s body has to be perfect. My dancers don’t fit that category. Yet they do all the adavus (dance sequences) and mudras (hand gestures) as prescribed by the text perfectly.”

He asked his boys to demonstrate an item. They jumped into action, performing a piece with clear lines and precision. By questioning the ancient treatise, Pasha unconsciously broke new ground. “Hindu society can be weird in its thinking. I have heard people say that the children are suffering because of their bad karma. I find this ridiculous when it comes from so-called intellectuals.”

The girls have a different story. “Most of them are hearing-impaired and cannot speak. They manage to learn dance with the help of movement vocabulary,” said Pasha. When you see the girls performing, it is hard to believe they have a disability. “They do their own make-up, often stitch their own costumes, manage the sound and light during the shows and the post-show audio and video editing.”

Over the years, Pasha has choreographed a whole series of productions: Bhagawat Gita on Wheels, Mahabharata on Wheels, Rumi on Wheels, and more. Each has earned him rave reviews in the national and international press. 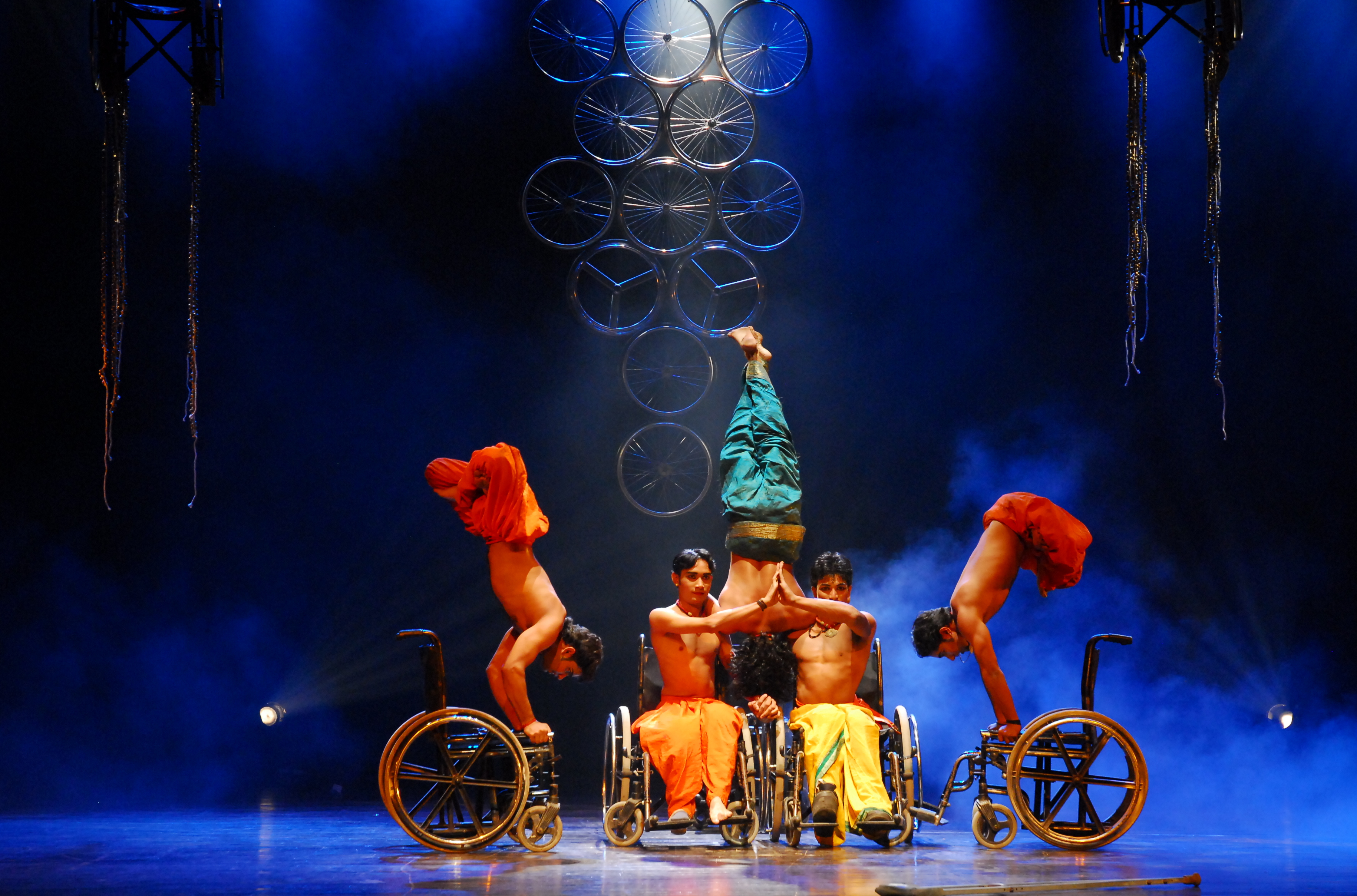 Bharatanatyam on Wheels won much critical acclaim. They performed Freedom on Wheels at the Wagha border. “When I choreographed it, everyone was shocked by the production. Each of our famous freedom fighters makes an appearance in a wheelchair. This was unsettling for everyone,” said Pasha.

Five years ago NDTV did a small feature on AUF.

More than a thousand students have trained at his institute. Gulshan, who joined as a junior dancer, is now a permanent member of the performing unit. A few years ago, he entered the Guinness Book of World Records for taking 63 spins a minute, beating the earlier record of 32, set by someone in France.

How did he do it? “Sheer riyaaz [practice],” said Pasha. His wheelchairs have a special, multipurpose design. “When we have a train to catch, for instance, we are usually welcomed by a big group of coolies at the station who think these handicapped boys need help. But they get off their wheelchairs, load trunks of props on to them and use the back as walking sticks. Before you know it, a long chain of wheelchairs with luggage is snaking its way around platforms.” 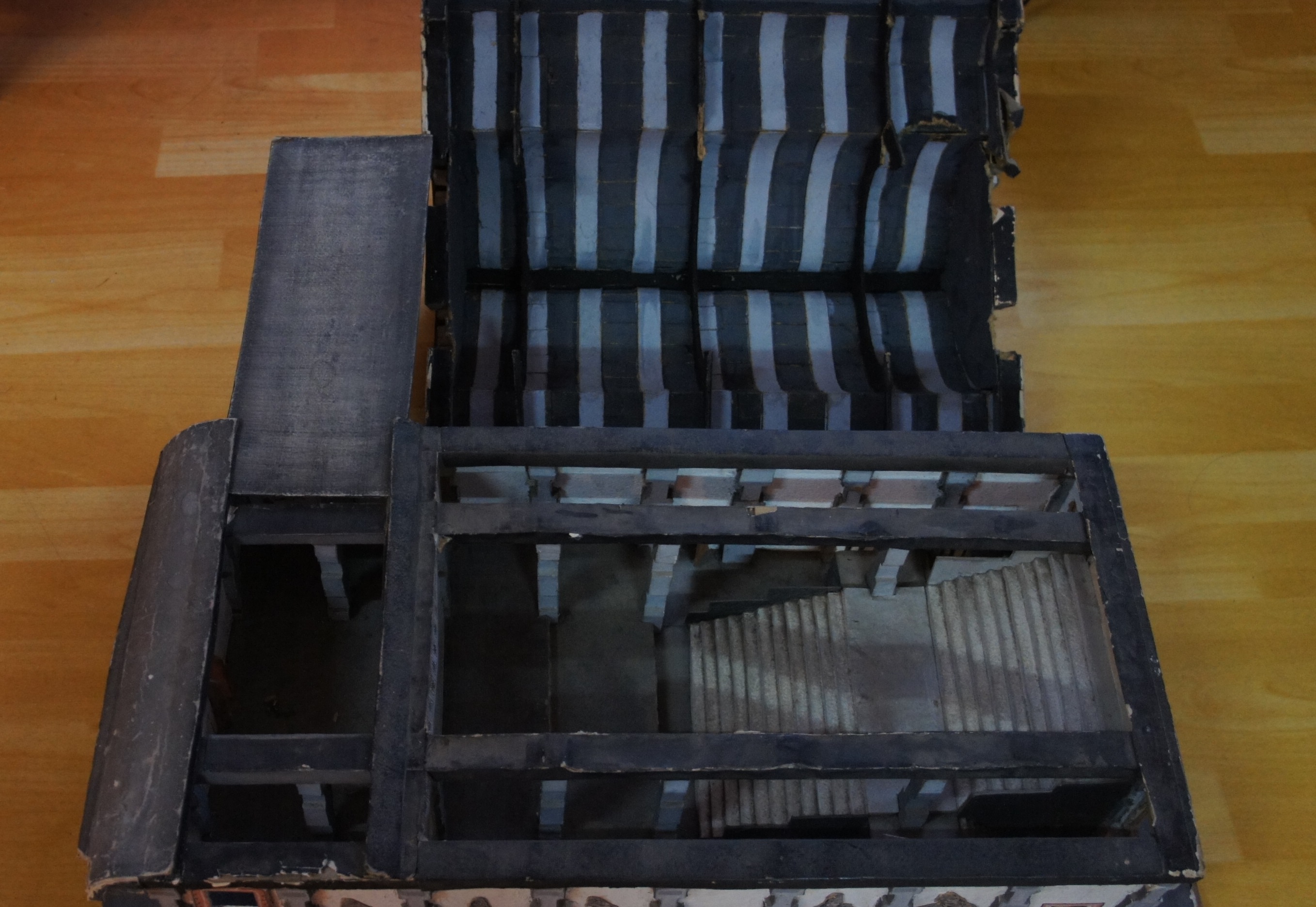 These are facilities the kids developed. “In all our shows, the wheelchair has a life of its own. We treat it like another member of the group,” said Pasha, who uses them extensively in his shows. In Rumi on Wheels, for instance, the dancers became whirling dervishes.

“State-run institutions don’t consider my dancers fit enough to be invited to their festivals or events. We raise our own funding, do our own marketing and publicity,” said Pasha. But Pasha’s strong will and commitment has kept him going, with his Foundation having performed more than ten thousand shows worldwide.

But a few philanthropists have supported him. “All my boys are full-time performers. They earn their livelihood from dancing. They don’t have other jobs,” said Pasha, with some pride.

India has about seventy million physically disabled people. They remain a neglected subaltern community. The state has done little to make infrastructure disabled-friendly, while the arts world has also not been pro-active about integrating them.

This makes Pasha’s fight for disabled children to become an active part of mainstream culture remarkable. Every show of his is also a form of resistance against an indifferent system.

“Karmanyevadhikaraste maa phaleshu kadaachana,” said Pasha, in a clipped Sanskrit, quoting the famous couplet from the Bhagwad Gita. Never worry about the fruits of your action. “The dancers don’t need sympathy. They need opportunities.”

More information about the foundation, including about visits, is available at http://www.abilityunlimited.com.