Contribute Now
Ad
Faisal (not his real name) took a year off after graduating from high school to prepare for the killer entrance exam for the Indian Institutes of Technology, considered one of the most competitive exams in the world. Last year, he made it to IIT-Roorkee in a department of his choice, but a year later, he was expelled from the institute, which said he was an underperformer.

The institute announced last year that it would expel first-year underperformers to maintain its academic standards, but did not spell out the criteria. Yet students did not believe it would actually enforce this, and that too with irreversible consequences. Moreover, the institute revealed its criteria only after students had finished their final exams.

Faisal was not alone. The senate at the institute, consisting of about 100 professors, decided to expel 73 students whose cumulative grade point average, or CGPA, was less than five in their first year. The maximum is 10.

“If the whole class is scoring above 80% in all exams and a student has scored 70%, he will be given a CGPA of less than five and shown the door under this new policy,” explained Rakesh, a student in the institute's integrated MSc programme. “There is always going to be someone who scores the least in the class and if they keep continue to oust those seats [students], so many careers are going to be destroyed.”

According to Rakesh, the institution had been previously expelling students who had failed to clear at least half the papers in the first year, but now the criterion is more stringent, and even those who clear all papers can be expelled. "The institute considers a CGPA of five to be equivalent to 55% marks, and that's not even close to failing," he said. 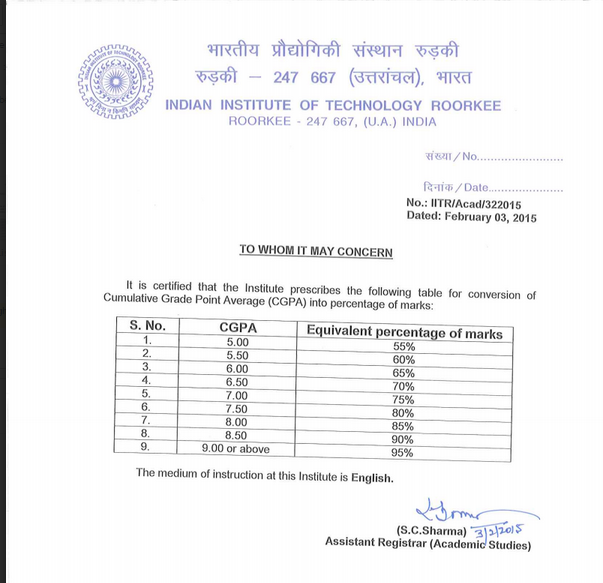 Vikas, a second-year student of earth sciences, feared that those with just more than five points may also soon face the heat. “There are hundreds of people who scored between five and six in their first year. Next year, their score might slip below five and they are scared that they will asked to go,” he said. “Nobody knows how this arbitrary rule came into place and what CGPA will be good enough to actually last four years here.”


The institute claims that it wants to maintain academic quality, but some say it fails to recognise the varied backgrounds of students, many of whom are first-generation college-goers.

“Some of us do belong to weaker sections but it doesn’t mean we aren’t capable,” said one student who hasn’t been expelled but has a CGPA of less than six points.  “The institute should make an effort to nurture weaker students instead of throwing them out. Why are its teaching methods not being questioned?”

He raises an important question because the Supreme Court in 2009 had to intervene to stop IIT-Delhi from expelling five students from the backward classes for their ostensible poor performance. The court noted that "these socially and economically backward categories are to be taken care of at every stage even in specialised institutions like IITs”, adding that the grading system cannot be mechanically applied to such students. “They must...endeavour to provide additional coaching and bring them up at par with general-category students."


Students from IIT-Roorkee who spoke to Scroll.in, however, claimed that there was no chance to appeal in the current framework and all they demand is one more chance. “We are willing to work hard and improve if they take us back even now,” said Faisal. “Also, we would have put in more effort for the exams only if someone had given us the warning beforehand."

Even as the students mull approaching the Uttarakhand High Court after having their mercy pleas rejected twice by the senate, there is little hope that the institute will change its mind.  “As long as I am the director,  I would like to continue this rule,” Pradipta Banerji told the The Economic Times. “The decision to expel the students is final. If a higher authority asks us to review the decision, we will do it. But a review does not necessarily mean the decision will change.”

Learning from their experience, some IITs have taken steps to introduce measures that help academically weaker students get up to the speed with their counterparts.

“We have been holding a workshop for those from weaker sections at the beginning of the session to introduce them to the course and help them be proactive in classrooms,” said a professor from IIT-Delhi requesting anonymity. “There are other ways to help students too and we try to make sure that the pressure on them is not increased when they are coping with low scores.”

IIT-Delhi, she said, helped students deal with pressure by easing their credit requirements for a semester and lightening their load so that they can focus on performing well on the fewer courses. “[This means that] they might take longer than four years to complete the degree but it’s better than expelling them mid-way,” she said.

Students at some IITs, including the one at Delhi, are often put on probation and assigned to a mentor who helps them get through the course.

One student from IIT Roorkee complained about the lack of summer courses and optional subjects that carry extra credits. “Those in other IITs get so many options to make up for their credits by selecting from a bigger basket with courses that cater to their interests,” said a student of earth sciences. “There are summer schools too in some IITs, where students stay back and do extra courses but none of it is present in IIT-Roorkee. Yet they blame us for not being good enough.”

The names of students have been changed to protect against a possible backlash from the authorities.