Contribute Now
Ad
Neeraj Ghaywan’s debut movie Masaan looks for love, meaning, redemption and transformation in the city of death. The July 24 release is set in Varanasi, and follows two parallel stories. One is of Devi, whose sexual rendezvous with a recently acquired boyfriend goes horribly wrong, putting Devi and her father at the mercy of a corrupt police officer. The other is of the star-crossed romance between Shaalu and Deepak, she from an upper caste and he a member of the Dalit Dom community that cremates bodies at the Varanasi ghats. Written by Varun Grover and featuring Richa Chadha, Vicky Kaushal, Sanjay Mishra and Shweta Tripathi in the main parts, the realistic drama is Ghaywan’s first feature after the acclaimed short Shor. Masaan made a sparkling international debut in the Un Certain Regard section at the Cannes Film Festival, where it became the first Indian title to win an award in the category. Masaan won the jury prize given to directors with ‘promising futures’ as well as a gong from the International Federation of Film Critics.

The 35-year-old director holds degrees in engineering and business administration, and he got his film education from two related places. One is the user-generated and now defunct Passion for Cinema blog that provided an online platform to independent filmmakers such as Anurag Kashyap and their followers. The other is Kashyap’s crime drama Gangs of Wasseypur, on which Ghaywan worked as assistant director before setting out to explore his own vision of the world. This vision is both romantic and pragmatic, as we discover during an interview.

Several films before Masaan have explored the complexities and contradictions of small-town life. What have you done differently?
Many films mock small towns and small cities, they are depicted from an outsider and urbanite point of view. But when we wanted to make Masaan, the intention was to tell the story from an internal viewpoint. Varun and I did research to become these people. I even learnt Bhojpuri.

The kind of small city or town we have shown in the film is the kind that has malls and multiplexes, a place where the internet is thinning the divide. But there is also a paradox. We are stifled by our growth and age-cultural traditions that have led to relative morality. The whole patriarchal system allows us to take the moral high ground – how a small city girl cannot have sex before marriage, for instance.

Varanasi has been used as a backdrop in films and documentaries countless times.
We were very clear that we didn’t want to show Benares in the usual way – the mandirs, the aartis, the sadhus, Holi celebrations. We have tried to avoid the Benares cycle rickshaws, we have shown mini-taxis instead.

We could not shoot at the real ghats, so we recreated the Harishchandra and Pathak ghats at an abandoned ghat that we found.

When we got to Benares, we got a different picture after speaking to a lot of pundits. We saw a side that is progressive, but there is also inertia towards change. What we have tried to show in the film is that change is slowly coming out. Devi’s father represents the audience’s point of view. He was modelled on a professor from Banaras Hindu University. He is progressive, but he isn’t okay with what is happening because of external persecution.

What led to the writing collaboration with lyricist and stand-up comedian Varun Grover?
Six-and-a-half years ago, I was with the online marketing department of the Hindustan Times newspaper in Gurgaon. I concocted a short story that could have been made into a short film. Once I quit my corporate life, I wrote 20 pages of a horrible draft. It became serious when we were finishing Gangs of Wasseypur and Varun came on board. I wanted a collaborator who knew this world very well. We go back a long way – we are friends and both engineers. We come from the educated middle class and have the same value system. Both of us are from Kendriya Vidyalaya. He can tell me if I have a shit idea. 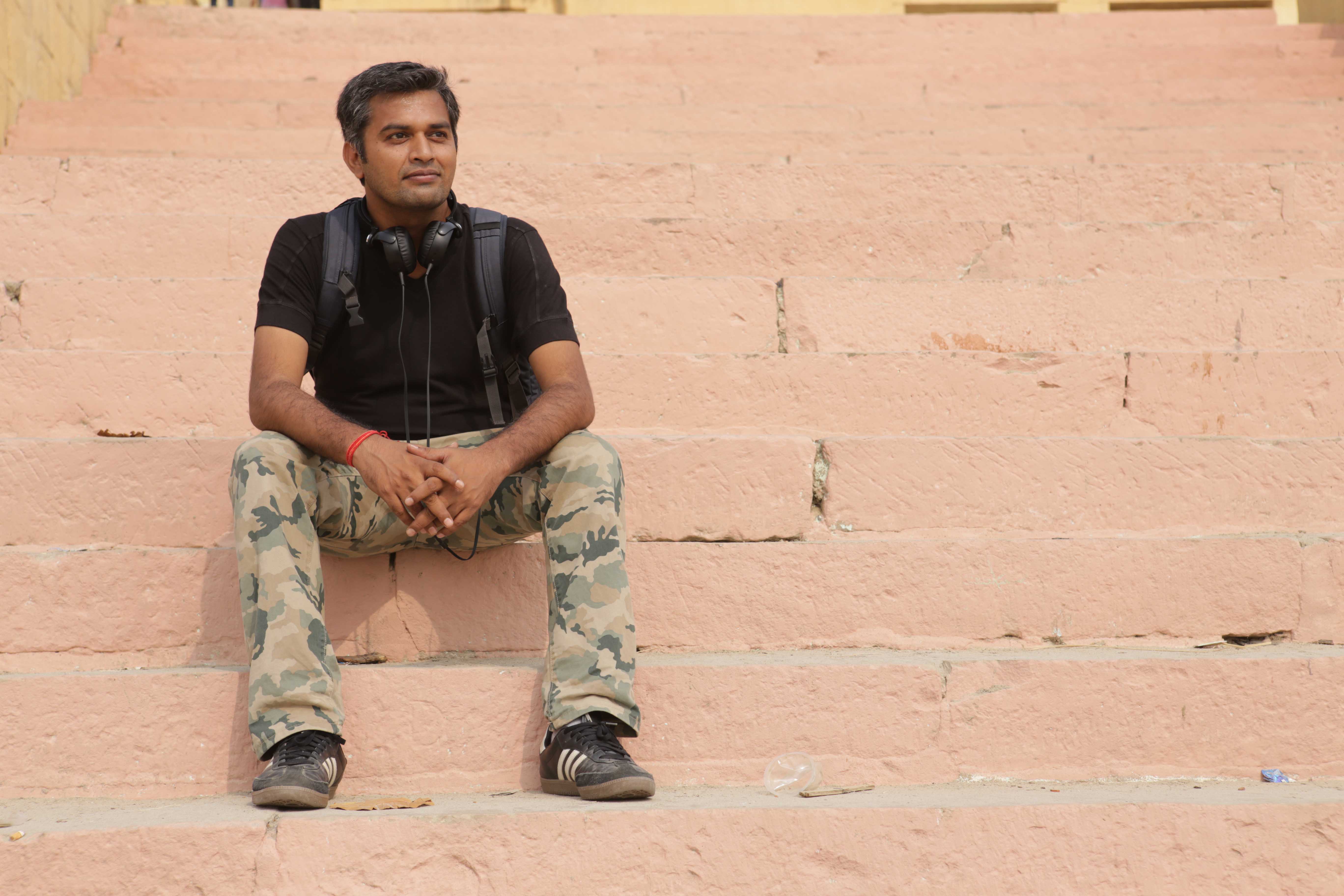 How does a marketing professional end up as a filmmaker?
As a child, my parents used to watch parallel cinema on Doordarshan. The realism affected me. Going to a theatre and throwing coins at the screen, that never happened to me.

I did a Masters of Business Administration in marketing and communication, and as a part of the course, we had a lecture on cinema. Until then, it had only been about Hollywood and watching Westerns with friends over beer. But when I attended this course, I saw cinema as an art form.

I then became a contributor to Passion for Cinema, and later an editor. I remember I had an appraisal for my team, and at the same time, there was a huge fight raging on PFC about the writing credits for The Legend of Bhagat Singh between Anjum Rajabali and Piyush Mishra. There was a war of open letters over which of them actually wrote the movie. I kept going out and taking calls, and my boss asked me: "Do you want to be appraised or not?"

I used to have my nine-to-five and this underground, Fight Club kind of life. I had a huge pay packet, and money blinds you. You also seek affirmation – your parents want you to [do] engineering, and your peers want you to do the same thing. I guess I have been seeking affirmation all my life.

I was working at a new digital unit set up by UTV Spotboy when I met Anurag. My corporate record had been good thus far, but I didn’t do very well at UTV. I used to feel depressed and even cry and listen to songs from the movie Udaan. Anurag called me late one night while he was writing the script for Gangs of Wasserpur. I had wanted to do film marketing – the best of both worlds. Anurag told me there were no short cuts, and asked me if I wanted to assist him on Gangs. He said, "If you don’t do it, how will you ever know?" I resigned immediately.

I had an interesting conversation with the filmmaker Jaideep Varma. He had liked my short film, Shor, and invited me for dinner. There, he said, passion is finite, it dissipates with time.

I was supposed to be an assistant director on Anurag’s Bombay Velvet. I told Anurag, if I don’t pursue my own film, it will never happen. He kissed me on the forehead and said, you are doing a great thing.

You spoke of your need for affirmation. Is that why both Shor and Masaan, despite exploring sobering truths in a gritty fashion, end on an optimistic note?
I don’t deny my optimism. I feel I am a bit responsible as a filmmaker, and there is no point in being foolhardy. If you are making a film for yourself, don’t expect an audience. I don’t have a thing that I will make a film only in a particular way. You are serving the cause of the film, and if there is so much realism and hard-hitting stuff, showing a bit of hope and compromise is not a problem.

Movies that would have been considered unconventional for the box office are finally making their way into theatres. Will it last?
The films that have done well are script-backed this year, and there is no other time when we could have said this. There is an ecosystem now, more so because of social media. This new wave has been there for a decade now – we move one step forward and two steps backwards. The biggest problem is that while we still don’t value screenplay writing, the madness for box-office numbers has also crept into audiences. That is a big worry.

But I don’t like the attitude of indie filmmakers that if you are indie, you are allowed to make any shit.

After winning the two awards at Cannes, Masaan has been publicised like any regular release, with an audience-friendly trailer and screenings aimed at creating social media buzz.
That journey has been deliberate, and I seconded the idea. There is no point in sounding elitist about the two awards at Cannes. I wanted to widen the scope of this film. The festival audience will come, but we wanted the larger audience. Masaan is not just a multiplex film.

The version of Masaan that will release in India is different from the one shown at Cannes. Which one reflects your vision?
There are nine extra minutes in the India cut. For instance, there is a boy meets girl scene for the Deepak-Shaalu track after feedback to the script at the Sundance Lab. Sundance told us that although the film was challenging every single convention of Bollywood, we had resorted to the idea of a boy looking at a girl and falling for her. They wanted to know why Shaalu was observed only from Deepak’s point of view and had no character of her own. We added a scene where the two first meet. The French didn’t care.

I am okay with this, since I am not hung up on the idea that this is my vision and my cut. The India cut is more emotional. Because I am an Indian, this is my director’s cut. There are a few other scenes too, but the soul of the film stays the same.