Become a Member
Ad
Kerala’s growing stray dog population has raised hackles all over the state. The government’s recent order on implementing the Animal Birth Control programme has animal welfare activists worried about the possible mass culling of dogs. They criticise Chief Minister Oommen Chandy’s decision to allow aggressive dogs to be put to sleep to reduce what is perceived to be an epidemic of stray dog bites.

“The import of that and the precedent is that it will be a mass cull,” said Arpan Sarma, director of external relations for the Federation of Indian Animal Protection Organisations. Sarma and other activists point out that such an order is blatantly against the law as set down in the Animal Birth Control Rules of 2001 under the Prevention of Cruelty to Animals Act.

The rules specify that only “incurably ill and mortally wounded dogs as diagnosed by a qualified veterinarian” be euthanized. Dogs suspected of having rabies must be captured and isolated. If rabies is confirmed, they must be allowed to die natural death in isolation.

“Any animal that is not suffering from an incurable disease cannot be put down,” emphasised Major General (retd.) RM Kharb, chairperson of the Animal Welfare Board of India. Kharb has written to Chandy, pointing out that his government’s order is unlawful and in violation of a Supreme Court stay on all directives allowing killing of dogs.

Kerala is witnessing an unreasonable panic over its stray dog situation, observes Sally Kannan, an honorary animal welfare officer for the Animal Welfare Board of India based in Thrissur. “From the general public to the government officials there is a complete lack of awareness,” she said. “None of them even know what is rabies.”

The popular perception is that killing a rabid dog and all the other dogs it might have come into contact with controls rabies. Current panic over reports of increased dog bites – news reports peg the number at anywhere between 1,600 in the year 2014 to 40,000 in the last eight months – is lending support to culling dogs.

The culling tactic has been tried before and hasn’t quite worked. Apart from the humane reasons for not controlling dog populations in this manner, there’s a practical reason too.

Dogs, being descendants of wolves, are territorial animals always looking to expand their range and so increase their sources of food. When one dog vacates his territory, other canines waiting on the periphery rush in to occupy that space. In Indian cities and towns, culling dogs won’t leave neighbourhoods dog-free, especially not with all the garbage available on roadsides as sources of food for strays.

“Culling does not work to control dog populations,” said Jack Reece, veterinary surgeon with Jaipur-based non-governmental organisation Help in Suffering – India, in an email to Scroll.in. “There is too much migration, improved reproduction and increased pup survival so very quickly the dog population is back to its original value.”

Also, Reece observed, it is probable that culling reduces the average age of the dog population, which is dangerous because there is some suggestion that young dogs are involved more in the transmission of rabies.

Jaipur, which is three times as big as Kerala’s largest city Kochi, has been held up as one of the models for stray dog population control. Help In Suffering – India kicked off the Animal Birth Control programme in parts of Jaipur in November 1994. The NGO was so efficient that by December 2002 the incidence of rabies had fallen to zero in programme areas even as they rose in other parts of the city.

Reece described how they still carry out the ABC programme. Skilled and trained dog-catchers collect street dogs in a systematic areas-wise manner from around Jaipur. The animals are transported to the HIS-India hospital where they are kennelled individually, checked by a veterinary surgeon and registered in records. They are then surgically sterilised under general anaesthesia – with great attention to surgical standards and sterility, Reece emphasised – kennelled till they have recovered and then released to the exact place where they were caught. 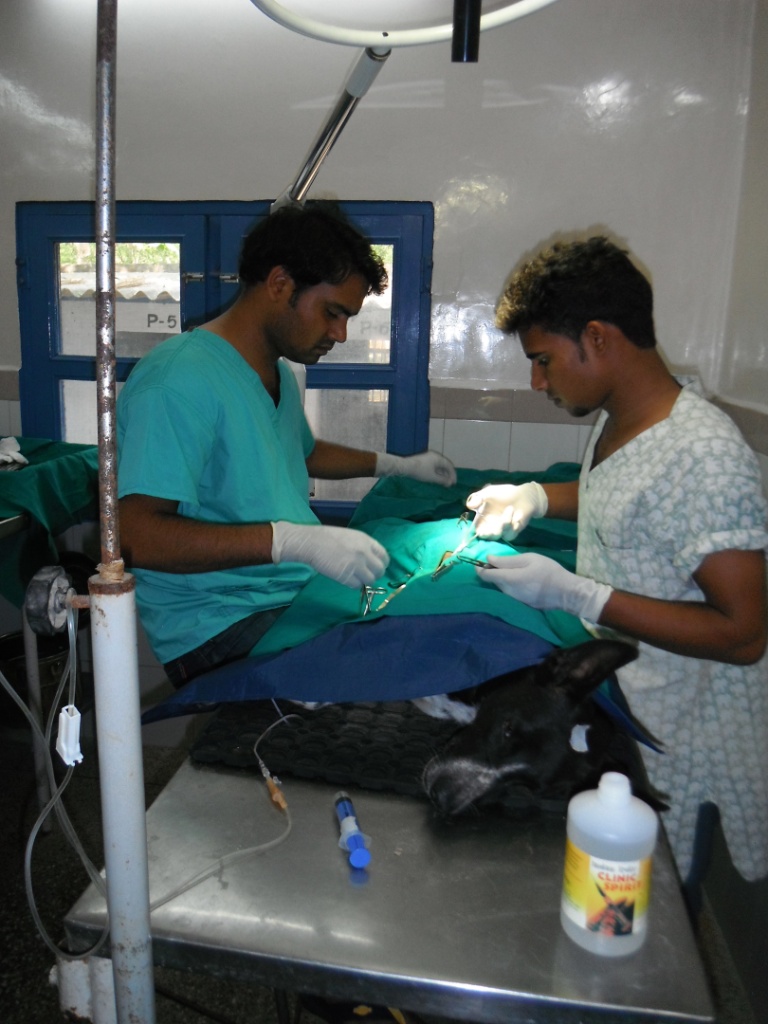 Dog being sterilised at HIS-India hospital in Jaipur
Image: HIS-India

Dogs typically reproduce twice a year. And to control their population the rate of sterilisation must be greater than their rate of reproduction. Typically, this sort of stability in dog populations is achieved when 70% of them have been sterilised. “You have to keep going back to the area and sterilise and vaccinate to break the rabies chain,” said Sarma.

HIS-India ran the ABC programme in Jaipur alone for many years. Lately, the Jaipur Municipal Corporation has taken charge by funding the programme but is still contracting the work out to the NGO. “The levels of skill, training, management and understanding amongst those involved in the municipal authority, who are charged with many other onerous tasks, are not really adequate to run efficiently a ABC programme themselves, and political influence means objectives are often changed,” said Reece, in the email to Scroll.in. “By using a contract service experienced in ABC management [HIS-India] the JMC has avoided some of these problems.”

Jaipur’s dogs and humans are lucky to have HIS-India just as Chennai benefits from the ABC work done by Blue Cross of India. “Where there are no NGOs, there is a problem because the animal husbandry department is not chipping in,” said animal welfare board chief Kharb. Cities like Jodhpur, Ajmer, Kalimgpong and Ooty have had similar success with ABC.

Sarma, who rues that central government allocation for the ABC programme is paltry, feels local municipal bodies must fund the programme properly. “If we don’t fund the programme you will keep having rabies, and you will keep having this culling and animal activists agitating against it,” he said. Right now, animal activists are going online with calls to boycott Kerala tourism to protest its attitudes and suggested action against the state’s canine inhabitants.