Contribute Now
Ad
On Wednesday, the Narendra Modi government told the Supreme Court that India's citizens have no fundamental right to privacy. Attorney General Mukul Rohatgi referred to a 1950 court verdict which held that the right to privacy was not a fundamental right while defending the constitutional validity of the Aadhar scheme, a massive database of information of individual citizens including biometrics and bank accounts. At the same time, the government is planning another big database.

In the ongoing stormy monsoon session of Parliament, where the government and opposition have locked horns over several proposed legislation, Human DNA Profiling Bill 2015 has been making little noise but can have widespread impact on India’s criminal justice system and the privacy of citizens. The bill aims to regulate the collection and use of genetic material from crime scenes, and also proposes the creation of a national DNA databank that might be used for non-forensic purposes.

DNA is a mighty tool, especially in criminal forensics, but access to a person’s genetic information can be highly intrusive and dangerous. DNA contains information about health and genetic relationships that can influence employment, insurance. It can be tampered with and planted at crime scenes.

Law and poverty expert Usha Ramanathan and Centre for Internet and Society executive director Sunil Abraham, who are members of an expert committee on DNA profiling constituted by the government, have written dissent notes against the final draft of the Human DNA Profiling Bill. Ramanathan and Abraham are of the opinion that there aren’t adequate safeguards to privacy and too much power rests with the proposed DNA Profiling Board.

Ramanathan notes that one of the biggest challenges of a DNA database is function creep – the gradual widening of the use of a technology beyond the purpose for which it was originally intended. As this DNA profiling bill enters Parliament, here are some questions we should be asking.

The short answer is “no”. Despite all the crime shows and murder movies we have seen where DNA evidence nails the perpetrator to the crime, DNA evidence is far from absolute. Genetic material recovered from a crime scene is likely to be only a partial strand of DNA. Analysing this partial strand can lead to a match with the person that left the DNA behind but can also lead to a coincidental match with people who happen to have a similar gene sequence in their DNA. False incriminations can happen when more than one person’s DNA get mixed at the crime scene, from DNA contamination, mislabelling and even degradation over time.

In the Aarushi Talwar murder case, for instance, the Hyderabad-based Centre for DNA Fingerprinting and Diagnostics altered its 2008 report in 2013 and admitted to typographical errors in the description of its DNA samples. The evidence could have changed the course of the investigation.

The bill proposes to set up a national DNA data bank and a number of state or regional data banks that will feed into the national data pool. Every data bank will have six categories under which DNA profiles will be filed – crime scene index, suspects’ index, offenders’ index, missing persons’ index, unknown deceased persons’ index, and volunteers’ index. The DNA profiling board will have the power to include more categories. In the offenders’ index, the DNA information will be linked to the name of the person from whom it was collected. All others will be linked to a case reference number.

What happens when my genetic material is on the database?

The bill gives sanction for broad use of DNA profiles and samples – to identify victims of accidents or disasters, to identify missing persons, for civil disputes and other offences. It also allows the information to be used to create population statistics, identification research, parental disputes, issues relating to reproductive technologies and migration. In his dissent note, Abraham argues that all non-forensic use should be rejected.

Cases like whether paternity should be determined, unwed mothers leaving their children and adopted children looking for their natural parents are hugely contestable things, said Ramanathan. “You are changing multiple structures and not recognising any of them,” she added.

Even though the bill allows for DNA information of offenders to be expunged once a court acquits them or sets aside a conviction, it makes no provision for removing other kinds of profiles.

The CDFD, which will be instrumental in building and processing DNA profiles, is using the CODIS software bought from the US's Federal Bureau of Investigation an compatible with their systems. The FBI used CODIS to identify victims of the terrorist attacks on the World Trade Center in 2001. More recently, the CDFD used CODIS to identify some who died  in the Uttarakhand floods of 2013 after asking for 5,000 people who were possibly relatives of the deceased to undertake DNA testing.

Can the DNA profiling board protect our genetic information?

The bill grants the board vast powers to allow the use of DNA profiles in any civil and criminal proceedings that it deems necessary. “Ideally these powers would lie with the legislative or judicial branch,” Abraham said, in his dissent note. “Furthermore, the Bill establishes no mechanism for accountability or oversight over the functioning of the Board.”

Ramanathan questions the constitution of the board itself, her worry being that the board is not a body of disinterested officials. The secretary of the board is supposed to be from the Centre for DNA Fingerprinting and Diagnostics, an autonomous institute that will get a lot of work from the creation of the national DNA data bank.

Why does a DNA fingerprinting consent form ask for caste?

One of the most troubling features of the creation of a databank is the consent form to be signed by a person donating blood for DNA analysis. Along with name, gender and address, the form also asks for caste to be listed.

India has a history of unwarrantedly linking caste and community with criminality. Members of decriminalised tribes regularly report being harassed by the police and even having false cases foisted on them simply because they are linked to a certain community. Tagging caste onto genetic data can result in unfair profiling and identification errors. 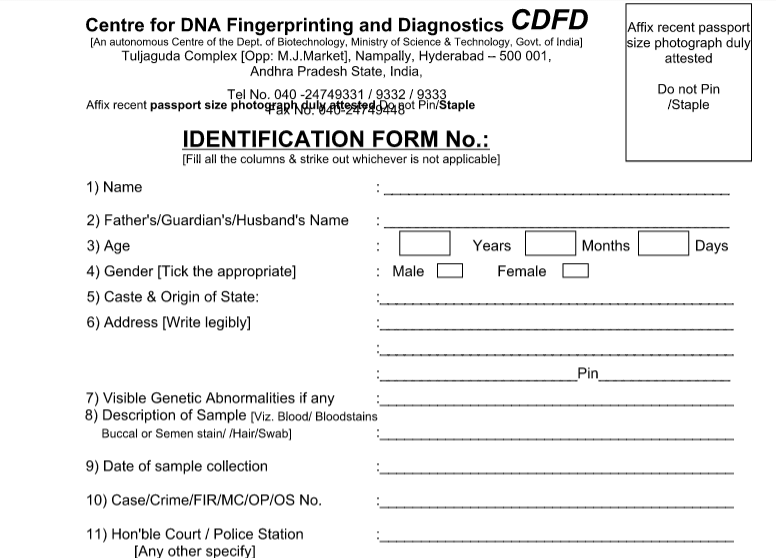 The United Kingdom set up its national criminal DNA database in 1995. The database expanded over a decade by including genetic information of anyone who was arrested till more than one million innocent people were on it – including a grandmother who didn’t return a football to children who kicked it into her garden. The dangers of a genetic database are too much state oversight, false implication in crimes and a loss of privacy – none of which should come to pass without at least a debate.