Jul 23, 2015 · 05:30 pm
Sudhir Badami
Forty lakh passengers travelled daily by the bus service provided by the Brihanmumbai Electric Supply and Transport a year ago. In February, the figure dropped to 32 lakhs, and after a fare hike in April, to a dismal 30 lakhs. With everything looking grim for the BEST, is there hope for a revival?

There are two aspects to the problem: one is the falling number of commuters, and the other is the BEST’s power supply issues.

The BEST is an undertaking of the Municipal Corporation of Greater Mumbai. With the advent of electricity in Mumbai at the turn of the 19th century, the then private Bombay Tram Company switched over to electrically driven tram cars from horse- driven tram cars. The company had to ensure that the power was available to run these trams and in the process decided to expand its consumer base to citizens of Bombay. Thus came about the Bombay Electric Supply and Tram Company.

With the development of pneumatic tyre technology, motorcars and buses began to ply on the "cobbled carriageways" worldwide and this Tramway company too began plying buses in Bombay –  "Tram" was thus replaced by "Transport". When it was taken over by the Bombay Municipal Corporation as an undertaking, it became Bombay Electric Supply and Transport Undertaking – or simply BEST Undertaking. Notwithstanding the change in the city’s name to Mumbai, calling it Brihanmumbai (Greater Mumbai) helped retain its brand value.

BEST has the monopoly of operating staged bus transport in Greater Mumbai. While integrating transport services with the Mumbai Metropolitan Region, it began to provide services to regions beyond the MCGM areas just as the transport divisions of other municipal corporations in the metropolitan region were permitted to reach out to areas beyond their respective municipal limits. The only condition is that these services emanate in their respective municipal limits, and that the BEST, or say Navi Mumbai Municipal Transport, will not operate exclusive services in the areas of other municipal corporations to prevent unhealthy competition even among the para-government agency operators.

Privatisation would mean a move towards less service oriented and more profit oriented. Public transport is a utility of necessity and convenience. One does not have to go too far to witness the fare structure controversy of Mumbai Metro One, a public utility service implemented under the public–private partnership model. The fare structure fails to provide affordable services to common citizen.

It is said that suburban railway services are the lifeline of Mumbai essentially because it carries nearly 75 lakh persons a day who take the train for short and long trips. On the other hand, the BEST has been more of a feeder service to the railways. It goes without saying that it is no less a lifeline of the city than the railways. It is also the pride of Mumbai for its generally well-maintained fleet of clean buses.

Road congestion has made bus trips crowded and arduous as well as time-consuming, and it has lost many users to shared autorickshaws and shared taxis which, unfortunately, have the state’s sanction. Many private taxis and drivers of private cars pick up passengers waiting at bus stops, thus denying the BEST their legitimate passengers.

The BEST has a fleet of about 4,700 buses of which about 3,800 non air-conditioned buses and 400 AC buses have been in service in 2011. It has now dropped to about 4,200. With the objective of cutting losses, BEST operates only about 3,600 buses daily. With uncertainty and unaffordable fares, many have resorted to walking to railway stations and short distances for which they would otherwise have taken the bus. Many who used exclusively the buses for relatively longer distances have moved to the railways despite the overcrowded, uncomfortable and unsafe train experience to save money and time. 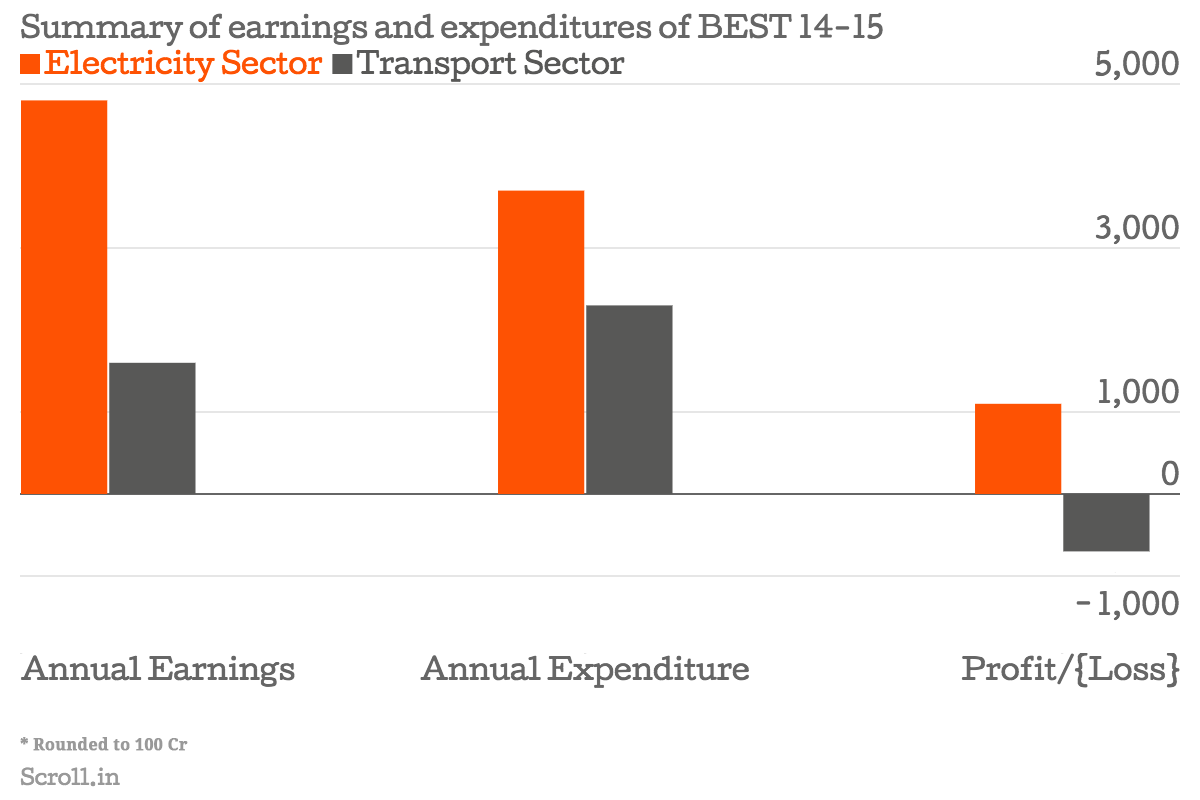 Although the BEST has shown a net profit of Rs 400 crores, it has to recover Rs 2,400 crores accumulated losses over the past 10 years. With a drop in passengers, BEST may opt to sell off the transport division. Is this being done with some sinister intentions of authorities and proponents of full privatisation of public transport? Whatever the case, it is important to understand that Mumbai’s need is for mobility, and operating an effective and efficient road public transport is crucial.

Look at the data obtained from the Comprehensive Transport Study carried out by the Mumbai Metropolitan Region Development Authority in 2008.

The Railways, which carries 75 lakh commuters daily, has a peak period load of 3,60,000 persons per hour while its carrying capacity is just about half at 1,80,000 if the travel is to have some semblance of safety and comfort. The fact of nearly 3,600 annual fatalities on the railway system can be attributed primarily to gross overcrowding.

To accommodate the additional capacity of 1,80,000 people per hour, additional public transport facilities are required. The Metro Rail will provide, as per plan, only 72,000 people per hour when all its phases are completed. Let it not be forgotten that the remaining 150 kms of Metro Rail will cost a whopping Rs 2,00,000 crore in a realistic estimate.

There is another aspect to keep in mind, and it carries hope. Bogota, the South American city has a Bus Rapid Transit System that carries 45,000 persons per hour per direction. Buses of 175-person capacity operate at a frequency of about 12 seconds and have achieved an average speed of 40-kmph. For Mumbai to achieve its 1,80,000 people per hour per direction requirement of capacity, it needs four bus public transport system routes with a capacity of 45,000 or five such routes of, say 36,000, or even six routes of 30,000 people per hour per direction. This can be achieved with some detailed planning and design.

However, with the current situation of the BEST Transport Division going into losses touching Rs 700 crores in the last financial year and likely to touch Rs 1,000 crores in the current, some innovative thinking is required to overcome its plight. The BEST is contemplating operating buses in dedicated lanes, which is not the same as the well-designed robust Bus Rapid Transport System on select roads and routes. It is not certain how they can achieve effectiveness without the help of the traffic police.

Here is a possible solution. If one considers that the average travel expense on BEST is more than Rs 25 per day today, BEST could decide to issue commuter smart cards valid for whatever number of days upto one year with Rs 25 per day as a flat charge. If 30 lakh commuters buy this card, BEST will earn a whopping Rs 2700 crores. What is the benefit commuters should be provided? They can travel at free will on any buses, AC or non-AC, as long as the card is valid.

These buses will not have conductors. The conductors will be deployed to ensure that the dedicated lanes are not used by anyone other than BEST buses. Dedicated lanes will not achieve the desired capacity, but they surely will make people take buses once again.

During a recent autorickshaw and taxi strike, the roads were less congested, and the BEST carried 45 lakh passengers with full deployment of their fleet. If a well-managed dedicated lanes scheme works well, one can expect BEST to carry even 50 lakh passengers, bringing in earnings of more than Rs 4,000 crores. There is need to work with optimism when the situation is dismal. Is the BEST listening?