Contribute Now
Ad
On every little street corner, outside the post office, in front of the Tsuglakhang Temple and behind the main bus station in McleodGanj, there are posters glued to the walls. As you walk along Jogiwara Road, young volunteers from Students for a Free Tibet-India request you to sign a petition. Announcements for candle light vigils are made every second day. Placards and banners are distributed among the passersby to pose for individual photographs, which minutes later, make it to a Facebook album, "Photo Action for Tenzin Delek Rinpoche", #TDR. 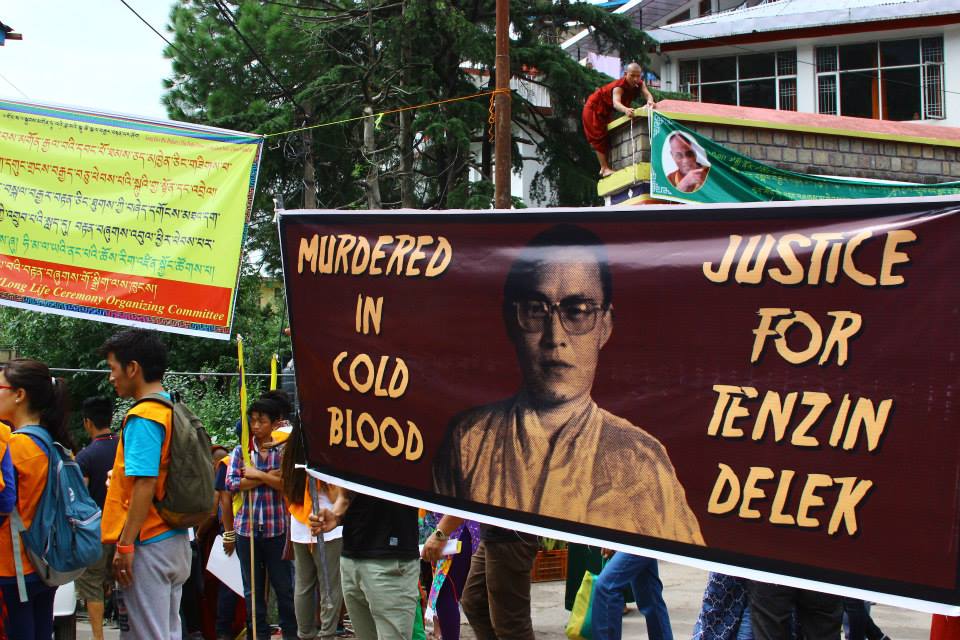 Since July 12, the air has been thick with anger and deep anguish in McleodGanj, Dharamsala. Thirteen years into his 20-year sentence on terrorism and separatism charges, Tibetan leader and political prisoner, Tulku Tenzin Delek Rinpoche, 65, was reported to be dead in Chuandong prison in the south-western city of Chengdu in China. Even as the news of deaths of political prisoners and self immolations has become a part of the everyday for the Tibetans, this information immediately sparked shock, anger and fear.

For, Rinpoche was no ordinary political prisoner. Born in 1950 in the Tibetan area of Sichuan, Rinpoche stayed in India from 1982 to 1987 to study under His Holiness the Dalai Lama. During that time, the Dalai Lama recognised him as a "Tulku", a reincarnated Lama. “He worked towards the overall upliftment of the Tibetans. He set up educational institutions, orphanages, monasteries and health clinics for them,” said GesheNyima, Rinpoche’s cousin, a resident of Dharamsala. “On account of his growing popularity as well as close proximity to His Holiness, the Chinese government began to consider him to be a threat.” 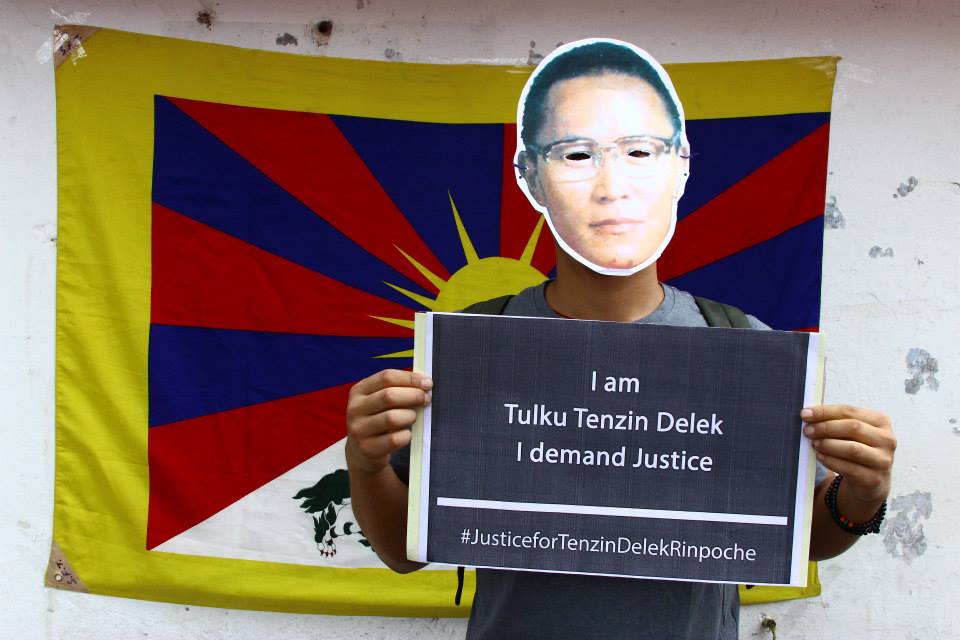 In what was touted to be a politically motivated charge, Rinpoche was arrested by Chinese authorities for his alleged involvement in a bomb blast that occurred in Chengdu city on April 3, 2002. He was sentenced to death with a two-year suspension in December 2002. In a 2004 report titled "Trials of a Tibet Monk", Human Rights Watch found no credible evidence to support the charges pressed against him. His family members alleged that despite repeated pleas, he was denied a lawyer of his choice, not allowed access to the evidence against him, and was tried in secret. His alleged co-conspirator, Lobsang Dondrup, was tried at the same time and found guilty. Dondrup was executed in January 2003.

Within days, scores of supporters marched towards the Chinese Consulates, demanding a recall of Rinpoche’s sentence. Hunger strikes, candle light vigils and petitions were ordered. In several pockets, protestors- both, young and old- inked their messages and fingerprints in blood. Following the global campaign, Rinpoche’s sentence was commuted to life prison in 2005, and later to 20 years’ imprisonment.

“Between 2007 and 2013, his family could visit him only six times,"  said GesheNyima, adding that they had requested his release on medical parole. "His health condition kept deteriorating, but he was not provided adequate medical help. Since 2013, all appeals made by the family to visit him were rejected. Finally, in June this year, the authorities relented.”

However, little did the family expect the course of events that would follow. Between July 2 and July 12, Rinpoche’s sister Dolkar Lhamo, 52, and niece Nyima Lhamo, 25, were held up by prison authorities. Exactly a day before they were scheduled to meet him, the Chuandong prison authorities announced, “Rinpoche is Dead.” No details regarding his death were provided. The authorities refused to let them claim his body for performing his final rites as per Buddhist customs.

Following the news of his sudden and unexplained death, at least 15 people sustained grievous gunshot wounds in the indiscriminate firing by the Chinese police during a public demonstration in Nyachuka. Hundreds of monks held a sit-in protest in front of the Chuandong prison, demanding the release of his body. With pressure mounting from all quarters – with the US and UK lawmakers also rebuking China over his death – the Chinese authorities announced that he died because of a “cardiac arrest”. Refuting the demands of the family and his disciples, the authorities cremated him in a guarded prison on July 16 in the presence of his sister and niece and 20 others. The authorities refused to part with his ashes. “The Chinese government has repeatedly violated all universal human rights in Tibet,” the Tibetan Parliament in Exile said in a statement.

The trauma for the family didn’t end here. Since July 17, both, Rinpoche’s sister and niece have been reportedly missing. “They were detained by the Chinese authorities on July 17. Ever since, we have not been able to trace them,” said GesheNyima. 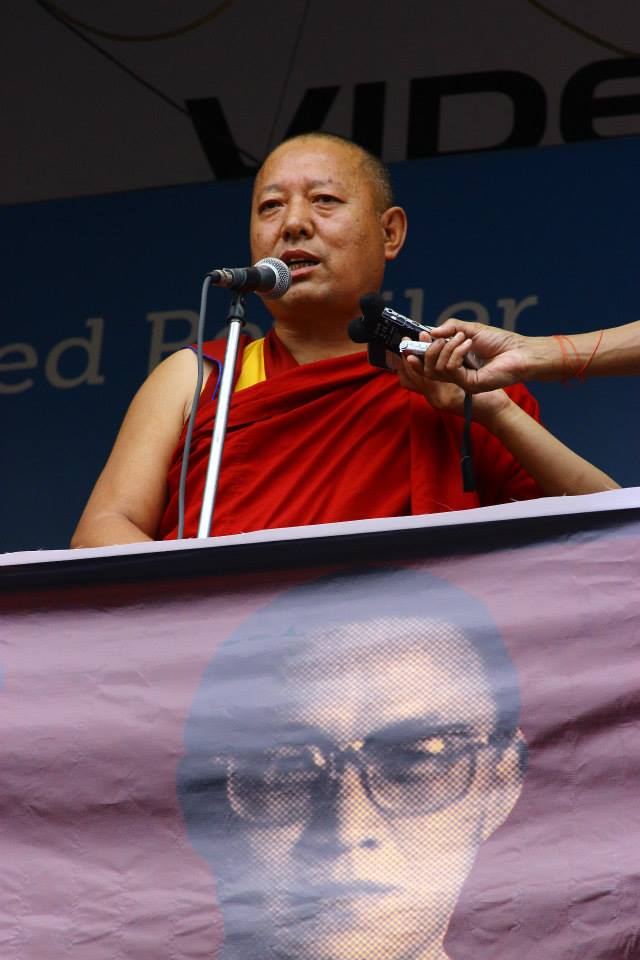 At the moment, the protestors are working on a three-point agenda: an immediate and transparent investigation into Rinpoche’s death, the end of violent crackdowns on peaceful protestors, and an intervention by the United Nations. “If a high-profile political prisoner such as Rinpoche could be subjected to this form of oppression, we fear the days ahead and the fate of thousands of Tibetan political prisoners, who continue to die unaccounted for,” said Tenzin Tselha, Programme Director of Students for a Free Tibet-India.

Barely a few hours before Tselha addressed an audience during a documentary screening event as part of the ongoing protests, a fresh headline flashed on the Tibetan news websites: "Another Tibetan Political Prisoner dies of torture".

Tibet can remain in China if Beijing recognises its culture and autonomy, says the Dalai Lama