Aug 03, 2015 · 01:30 pm
Nayantara Narayanan
India is getting ready to open up its space sector to commercialisation and privatisation by beginning work on a National Space Law. So far, all space activity has been the prerogative of the Indian Space Research Organisation and the Department of Space. Now, the government wants to tap into the technology and finances of the private sector to remain a leading power in space technology – a position it achieved with the commendable Mars Orbiter Mission.

“India has no real ecosystem for private space activity in India,” said Narayan Prasad, chief technology officer of private satellite developer Dhruva Space. “That’s because there is no such mandate of commercial space industry as such.”

The stage for private players to enter is slowly being built. Mangalyaan proved that India has the scientific capability to match the United States and carry off the mission at a fraction of America’s cost. Space technology is also becoming a foreign policy tool, with Prime Minister Narendra Modi planning a SAARC satellite to be developed by ISRO as a gift to India’s smaller neighbours. The government announced last week that ISRO’s Polar Satellite Launch Vehicle has launched 45 satellites from 19 countries so far under commercial agreements, earning $17 million and 75 million euros from the operations. ISRO’s commercial arm Antrix has signed agreements to launch 28 more foreign satellites from six countries.

The aspiration of private players in the space industry, who so far have had to be content with activities like supplying parts to ISRO, is to explore opportunities from telecommunication and geo-imaging satellites to mineral exploration in space and space tourism. While it may take years to build a commercial ecosystem around space technology, the start has to be with clear legislation on how this will work. Twenty-two countries already have National Space Laws. India, while a signatory to the Outer Space Treaty (short for the Treaty on Principles Governing the Activities of States in the Exploration and Use of Outer Space, including the Moon and Other Celestial Bodies) is only now beginning to draft its law. 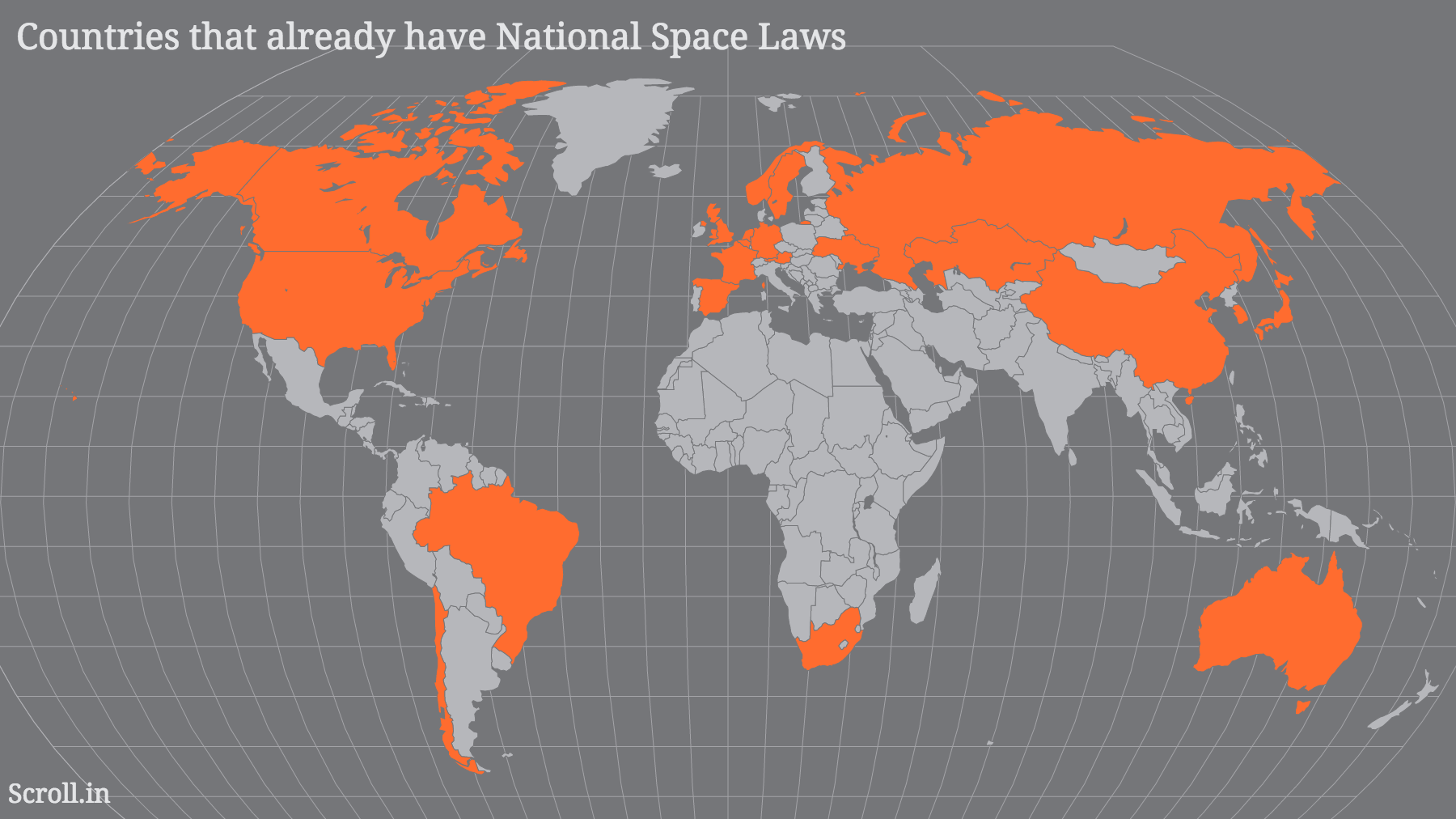 “All space activity is potentially dangerous,” said Kumar Abhijeet, assistant professor of space law at the National Law School of India University in Bangalore. The basis of a national space law, he said, is authorisation via licensing and supervision.

Abhijeet organised a conference in mid-July for space experts to debate the issue of space legislation. The outcome of that conference was a document called the Bangalore Declaration which recognises that while privatisation of India’s space industry is inevitable, the country’s security should come foremost, India should continue to meet her international obligations, and that there is a “dire need” for rule of law in outer space.

A space law based on these tenets will regulate the space sector as follows. A private company can approach the government for a licence to take up a space-based project. The government, after determining that the activity does not pose a threat to national security, can issue the company a licence while retaining the authority to supervise its activities and revoke the licence if it is found to violate the licence conditions. There may be many kinds of licences – different ones for manned and unmanned space launches, for instance.

Provisions of the national space law will have to comply with Outer Space Treaty conditions as well other conventions. Under the registration convention, all space objects are registered with a national registry and a UN registry. This gives ownership and control to the state in whose registry the object is being registered.

The liability convention decides who must pay in the event of two objects colliding in space or some objects crashing to earth. “When you are inviting private players in and they are launching their satellites, the liability will be with the government of India” said Abhijeet. “The question is to what extent the government should take that liability”. Countries that have already written up their space laws have dealt with the question in different ways. Some have taken a stand that if the private party has not been negligent then the government will accept liability. Others have foisted absolute liability on the private party.

The law might also make it mandatory for private companies to have insurance cover for each of their outer space projects. Space insurance in India has been nascent with ISRO only taking cover for launches from foreign shores and leaving domestic launches uninsured. Even the Mars Orbiter Mission was not insured because the cost to cover the mission was too high.

With increasing activity in space, safeguards need to be taken against leaving more debris in space. Debris results from non-functioning space objects and outer space collisions. “A tiny piece of debris of about 1 cm can completely destroy a satellite,” said Abhijeet. “If we are thinking of such fancy objectives like space tourism, then space environment must be completely free from these pollutants.”

Dhruva’s Prasad wants India to take a leaf out of the US’ book and allow free and non-exclusive technology transfer from ISRO to Indian space companies. He also wants to see the law mandate that the government space agency not pursue any activity that can be performed by the private sector. “The private industry is able to build and develop satellites, like remote sensing satellites,” he said. “So NASA doesn’t get into these activities that the private industry can do.”