Contribute Now
Ad
Last week, a nine-year-old girl in Telangana was made to kneel for two hours in class for not doing her homework. The punishment severely reduced blood flow to her muscles as she developed cramps and had to be taken to multiple hospitals for medical attention. While undergoing treatment, the nine-year-old died.

Corporal punishment in schools is a grim reality of education not just in India but many other countries. However, if news reports are to go by the situation of students in classroom has only gotten worse. A recent incident from Chhattisgarh last month highlighted just how teachers can seriously hurt students over trivial issues.

Three students of Class 9 at a school in Raipur were allegedly beaten up by their principal in front of the whole class for wearing fancy hair-clips, leaving them traumatised as the teachers requested that they don’t disclose the incident to their parents.

In reaction to the increasingly common incidents such as these, Young Lives, an international collective of organisations studying childhood poverty brought out a working paper last year specifically on the state of corporal punishment in Andhra Pradesh (now bifurcated into Andhra and Telangana) and the way children and parents think about it.

The study surveyed nearly 3000 children in united Andhra Pradesh from 2002 to 2009 and concluded that corporal punishment was not only prevalent but frequent as well in a typical school. 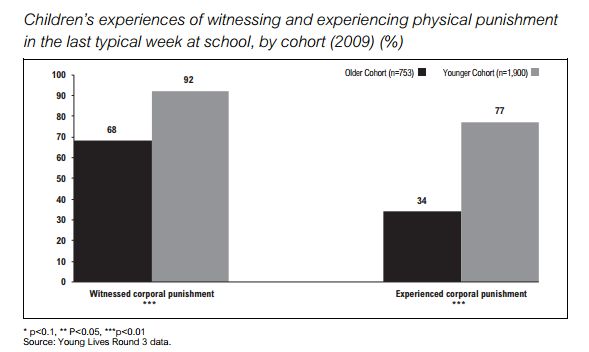 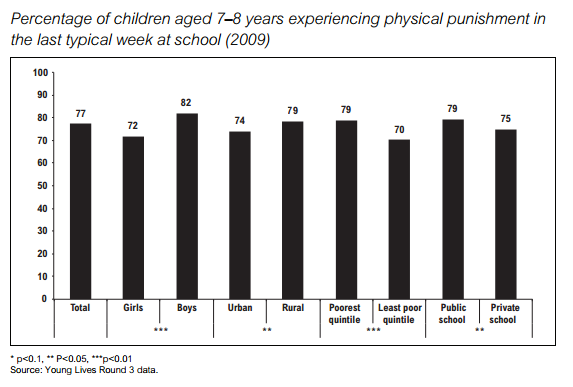 Moreover, boys, those in the poorest quintile or the ones studying in the government schools reported a more frequent experience of physical punishment as compared to their respective counterparts.

It’s not just restricted to Andhra Pradesh as physical punishment has emerged as a norm in schools across the country. A 2007 report by the Ministry of Women and Child Development said that two out of three children are physically abused in India with boys (73%) only slightly more likely to face it than girls (65%).

While the report stated that corporal punishment is rampant in Andhra Pradesh with children facing violence routinely and boys experiencing particularly high levels, its shocking insight was the fact parents were often, if not always, found to be condoning it.

“The teachers said they don’t beat the students as strict rules are passed. But we ourselves ask them to beat on their backs or on the hands, otherwise the students will become stubborn, without any fear,” said a mother to the authors of the study.

“After spending so much money, my son is not studying. I tried to explain that teacher beats you for your betterment – they are not your enemies – but he does not wish to continue his studies,” he said.

Even though the Indian government banned corporal punishment in schools five years ago, reports have highlighted that it’s rampant and thriving at the behest of teacher and at times parents, who often go too far in ensuring that children toe the metaphorical line.

Moreover, the Right to Education Act lays down a strict definition of punishment but falls short of mandating action against the teachers who resort to physical or mental harm as a means to ‘discipline’ the students.

The solutions, feel activists, is not just in prohibiting these incidents by strict measures but also in training teachers with skills that help them teach more effectively and manage students without having to take the recourse violently.

“Strict penal action would indeed be a deterrent and is needed,” Vimala Ramachandran, Chairperson of ‘Eliminating Corporal Punishment in Schools Committee formed by the National Commission for Protection of Child Rights told Firstpost. “However, we cannot only focus on the teachers who use corporal punishment against children. We also need to make sure that educational administration enables teachers to develop skills to deal with different situations without resorting to punishment,” she added.

Young Lives’ report, meanwhile, argues there is an urgent need to address the problem of corporal punishment and violence against boys and girls in schools as well as other settings. The power dynamics that allow adults to use humiliating forms of punishment, in some cases leading to the injury or even death of young children, need to be challenged.

“Changes in policy and legislation do not appear to be matched by changes at the school level, and this suggests that other factors, particularly parents’ views about corporal punishment, and larger questions related to how boys and girls are treated by adults in society at large at different ages, also need to be taken into account.”