Contribute Now
Ad
As Goa's assembly goes through its monsoon session, agitated parents have taken to the streets to demand legislation to ensure that English-medium primary schools receive government aid, just like their Konkani-medium counterparts do.

Since the session began on July 27, a group of parents calling themselves the Forum of Rights of Children to Education, or Force, have tried a variety of strategies to draw attention to their cause. On Friday, they blocked a road for two hours. More significantly, the group’s secretary, Savio Lopes, has been on an indefinite hunger strike for the past week.

At stake, they say, is their children’s future: English-language education, they insist, is essential if their children are to secure well-paying jobs in the globalised world. “Most of the people here are poor and cannot pay the fees for a private English-medium school,” said Cynthia Fernandes, the treasurer of Force. “Is this a government only of the rich? Let the poor also come up.”

Late on Friday evening, 11 MLAs from the Bharatiya Janata Party-led ruling formation visited Panjim’s Azad Maidan in an unsuccessful bid to convince Lopes to end his hunger strike. On Sunday, as Lopes entered the seventh day of his protest on Sunday, his wife and three daughters joined him.

The debate about the medium of instruction in Goa’s primary schools has been bubbling for more than two decades. In 1991, English-medium primary schools were declared ineligible for grants to cover teacher salaries, equipment and building expenses because the government wanted to encourage early education in the mother tongue.

But this position was reversed in 2011. Three years later, when the BJP came to power, it took a cabinet decision affirming this policy and said it would pass a bill to convert it into law. Force is agitating for the government to include its policy for grants for English-medium schools into the Education Act and Rules.

“Three assembly sessions have passed since then and nothing has happened,” said Cynthia Fernandes, treasurer of Force. “They have to do it during this assembly session. This is our only demand.”

Since the agitation started, the government has given repeated assurances that the funds will continue. "There will not be any reduction in grant,” Chief Minister Laxmikant Parsekar told the assembly on Friday. “Government is very firm on its stand.”

The policy is now being considered by the assembly’s Select Committee. “The decision will be taken only after select committee report to the government,” said Paresekar.

Not everyone has been so sympathetic. Though the Congress has extended its support to the Force agitation, supporters of Konkani and Marathi have made their displeasure evident. MLA Vishnu Wagh has called the agitation “undemocratic”. In addition, the newly formed Konkani Lok Shakti has demanded that the government “discontinue grants to church-run English-medium schools.”

At the end of March 2014, according to government data, Goa had 2,177 schools. Of these, 1,091 were government schools and 906 received government aid. The remaining were private.

Aided schools are run by a range of institutions including the church, other religious bodies and private trusts. Most aided schools have English as their medium, but there are Marathi-, Konkani- and Urdu-medium aided schools as well. 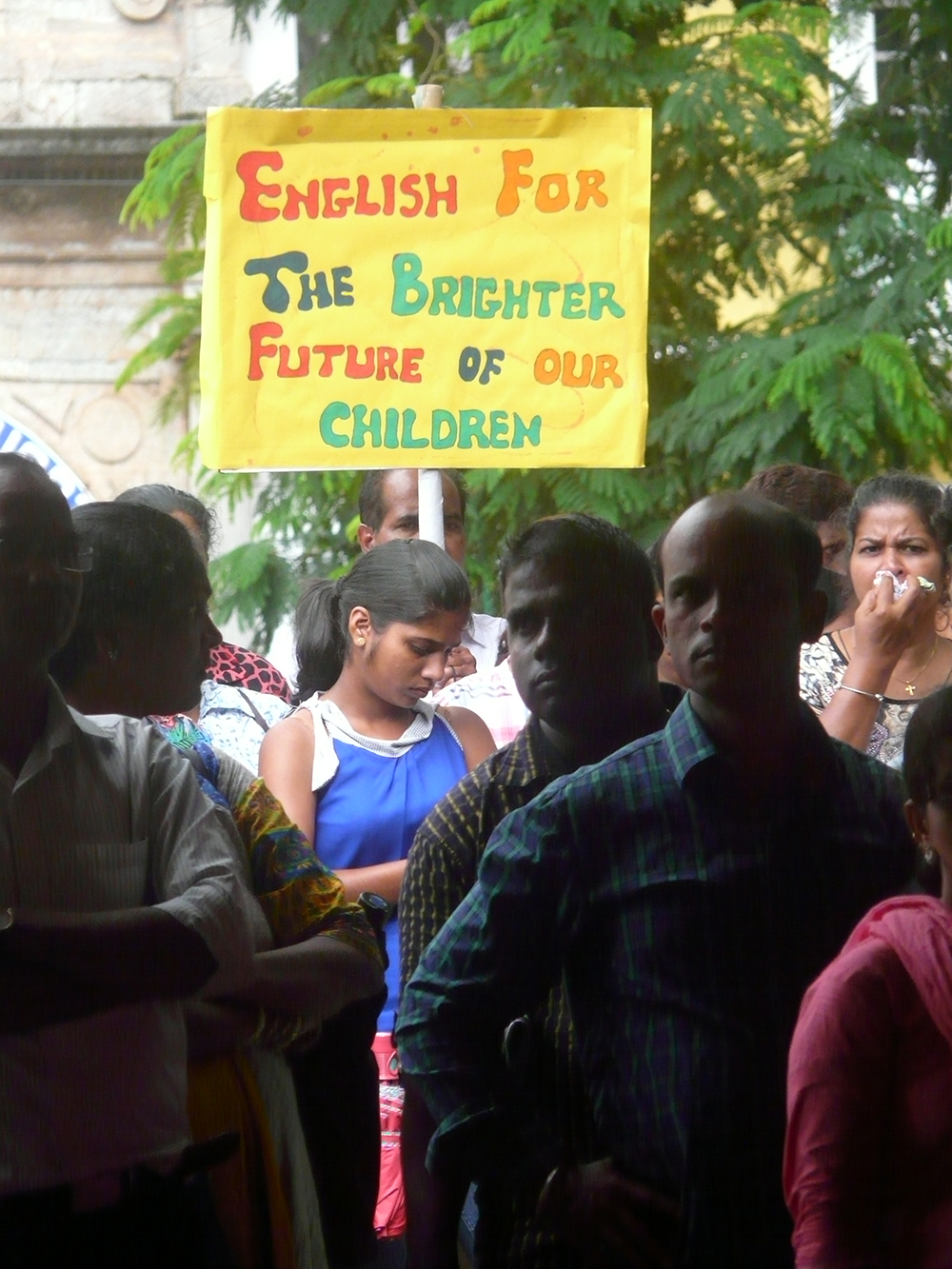 Besides, the government introduced a religious angle into the language issue with a cabinet note in 2014 that classified schools in the state into three groups: private, unaided schools; Konkani-medium schools; and minority schools with English as the medium of instruction. It said that the last two categories would be eligible for state grants.

Some Force members are asking why the government is qualifying aided English-medium schools with the “minority” label. While it is true that many of these schools are run by Church organisations, the debate about the language of instruction has nothing to do with their minority status, protestors said.

A week into the agitation, the enthusiasm is still evident at Azad Maidan. Each day, parents of students from around the state have come to the ground by rotation. They were undeterred by the long distances, unreliable public transport and the squelchy grass underfoot.

On a recent day, about 500 parents huddled under a cheery orange awning as the steady monsoon rain fell around them. Some joined Savio Lopes on stage, leading the crowd to sing and chant slogans, such as "Now or never", "Do or die." Several people reiterated that they were not opposed to the Konkani language. But they want to ensure their children have the language skills necessary to progress in today’s world, they said.

On Tuesday evening, Force was issued an order to vacate Azad Maidan despite having permission to gather there from the Panaji municipal corporation for 19 days, after paying a fee of Rs 19,000.

The organisers said they would continue their protest despite the order of eviction. On Friday, three police battalions drove up to the protest venue. The protestors feared that  Savio Lopes was going to be detained. The women on stage drew closer, shielding him. 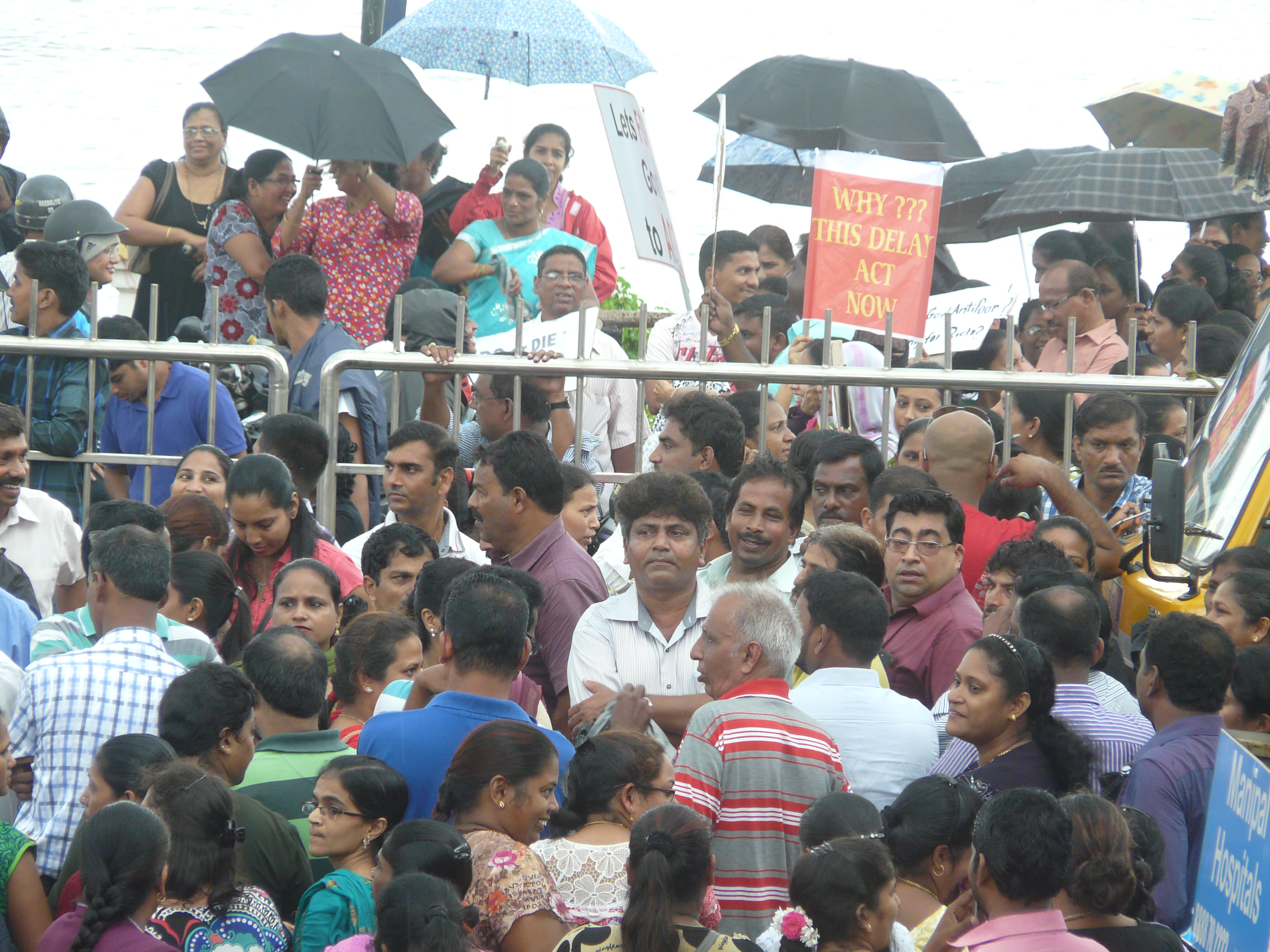 Chryselle D'Silva Dias is a freelance journalist who lives in Goa.