Become a Member
Ad
What do these leaders, Shivaji, the great Maratha king, and Sardar Vallabhai Patel, the "Iron Man of India", have most in common? One was perhaps their tenacious fight to secure freedom for their motherland. Today, statues are what unite the two.

Sardar Patel is to be immortalised by a "Statue of Unity" on Sadhu Island in the Narmada river, 3.2 km away from the Sardar Sarovar Dam, while Shivaji will find a place on a 16-hectare bedrock in the Arabian Sea off the Mumbai coastline. The first is to be completed by 2018 and the second by 2019.


The Shivaji statue, which is to be 190m tall, is expected to cost the state Rs 1,400 crore. Projected as a tourist attraction, it is supposed to have a world-class security system that includes a radar system to safeguard it from terrorists and 24-hour CCTV coverage. The Statue of Unity is be 182m tall. The project will be built at an estimated cost of Rs 2,989 crore, with the time for construction fixed at 42 months.

Both are to be built on a piece of land in a water body, both have strong political backing, but most importantly both have faced rough weather in the Environment Ministry and with non-profits with regard to their green clearances.

What is Environmental Clearance?

EC is a mandatory process, which upcoming projects, new or involving expansion of existing structures have to undergo before construction commences. 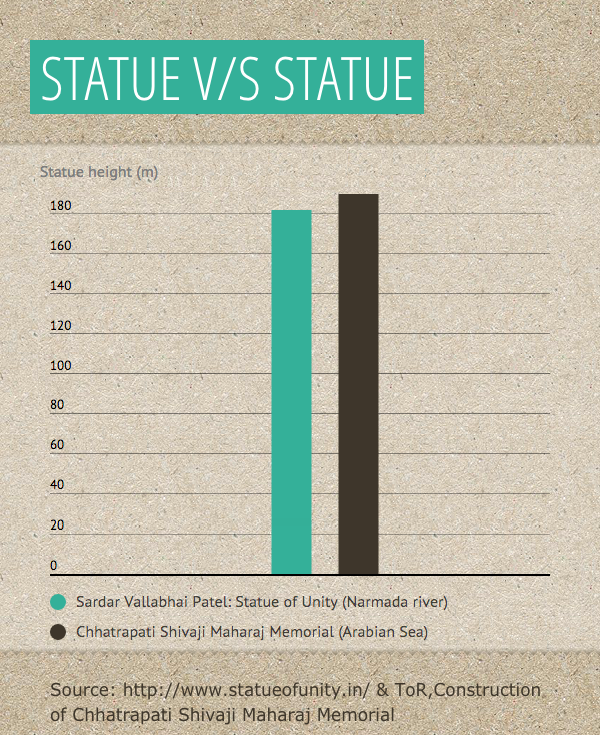 Steps involved to get EC
* Screening: Identify a suitable location for the proposed project and assess if it requires EC
* Scoping: If EC required, then proponent conducts an Environmental Impact Assessment (EIA) study that includes the ‘Terms of Reference’ (ToR), that document & clarify the purpose & structure of the project
* Public Consultation: Concerns of local affected persons & others who have plausible stake in the environmental impacts of the project are ascertained through a public hearing (PH) and written responses.
* Appraisal: An Expert Committee, at the Centre/State level, reviews the project & makes recommendations, either to grant/ reject the EC after detailed scrutiny

The Shivaji statue is to be built on a rocky outcrop 3.6 km towards the sea from the water jetty at Girgaon in Mumbai. The site falls in coastal regulatory zone IV and will involve new construction, reclamation of land and fortification of the sea wall. Under Coastal Regulation Zone norms, reclamation or construction activity in the water up to 12 nautical miles, or nearly 20 kilometres, into the sea is prohibited.

However, an amendment proposes to ease these norms to allow the construction of memorials or monuments in the sea. Once finalised, 'exceptional projects' such as this, which were prohibited earlier will be considered and allowed after they get an environmental clearance. Perhaps fearing criticism from the public, the government of Maharashtra had requested the central government to waive the public hearing, an important step getting the clearance. It asked for this waiver saying the project has a larger public interest. The expert appraisal committee, looking into the matter, has obliged.

The Statue of Unity follows a different script. It is to be built 3.2 km downstream of the Sardar Sarovar Dam, an area that falls in an earthquake-prone zone and is near the Shoolpaneshar Sanctuary. It will involve massive construction that will have a serious impact on the ecology and environment of the area. Construction work has begun, and the hillock in Sadhu Pet, where the statue is to be installed, is to be flattened to 60 metres.

Environmentalists claim that the project is in an environmentally sensitive area, hence making the relevant clearance a necessity. However, Sardar Sarovar Narmada Nigam Ltd, which is implementing th project, counters this claim, by saying that such a clearance is needed only if the construction area is more than 20,000 square metres, much more than what the project will require.

Activists are arguing that the activity area of the project is much higher than its stipulated 20,000 square metres, and have demanded a halt to this 'illegal' activity. "The case is still pending as the respondents have not submitted a proper design, and as per their affidavit, the design is not yet ready," said Trupti Shah, economist, researcher and one of the petitioners who has moved the Narmada Grant Tribunal against the statue clarifies. Its verdict is awaited.

Rohit Prajapati, an environmental activist, contends that the project is not simply the construction of a 'mute monument' but an elaborate tourism project that will include a man-made lake, parking site and also a hotel, and that the statutory authorities cannot abdicate their legal and procedural responsibilities to obtain an green clearance. "The construction of the Statue of Unity Project is bound to result in damage to the river, riverbed, its biodiversity, people living downstream and their livelihoods," said Prajapati.

Development, or as in this case, inspirational monuments, must not be at the expense of tweaking existing environmental rules, especially if they ignore public opinion. After all the Statue of Unity is being promoted as 'a project by the people, for the people'.

A well-established process for obtaining a green clearance is not only imperative for the people and the environment but also for the government. These two projects may set a precedence for other development projects to bulldoze their way through green checks in the future. An exemption from public hearings is a lost chance to gain public trust and involve citizens. Aren't both these men bigger than the statues we plan to build of them?

This article was originally published on indiawaterportal.org.