Contribute Now
Ad
Make in India, Skill India, Digital India, smart cities, industrial corridors. These buzzwords popularised by the Narendra Modi government are all united by a single purpose: to create industrial jobs to pull Indians out of agriculture and boost the country's economy.

The centrepiece of the industrialisation push is the Delhi-Mumbai Industrial Corridor. It will be a $100-billion project with 23 industrial hubs along its 1,500-kilometre length. The plan will see the Indian Railways building a dedicated freight railway line to facilitate fast movement of goods from these hubs to the Jawaharlal Nehru Port near Mumbai.

DMIC officials claim that the factories in these industrial zones will employ about 25.5 million people in the next seven years. “Since DMIC will focus on industrialisation and urbanisation, employment will be an important by-product,” said Tallen Kumar, the CEO of the DMIC Development Corporation.

But experts warn that these assumptions might be too optimistic. “With mechanisation, industry might not create as many jobs as we are hoping,” said Manish Agarwal of Pricewaterhouse Coopers, who has been involved in producing feasibility reports for other industrial corridors across the country.

But even if the project does fulfill its promise of creating some jobs, many farmers along the DMIC fear there will still be large-scale migration. Chintaman Menske, 45, a farmer in Maharashtra's Raigad district, is among those who is anxious that his children will have to leave their ancestral lands after the project comes up. He is unhappy that his five acres of land have been notified for acquisition for the DMIC because he believes that farming will offer his three children a more steady livelihood than they could hope to find in factories. So far, he said, the factories set up in the area by the Maharashtra Industrial Development Corporation have shown an extreme reluctance to hire local people.

“I learnt Hindi well only in the past few years only after our region was flooded with migrant labourers from UP and Bihar," said Menske, whose mother tongue is Marathi.

The people who run these factories fear that locals are more likely to organise themselves to press for greater demands. Migrant labourers, on the other hand, are more pliable since they lack local support structures. 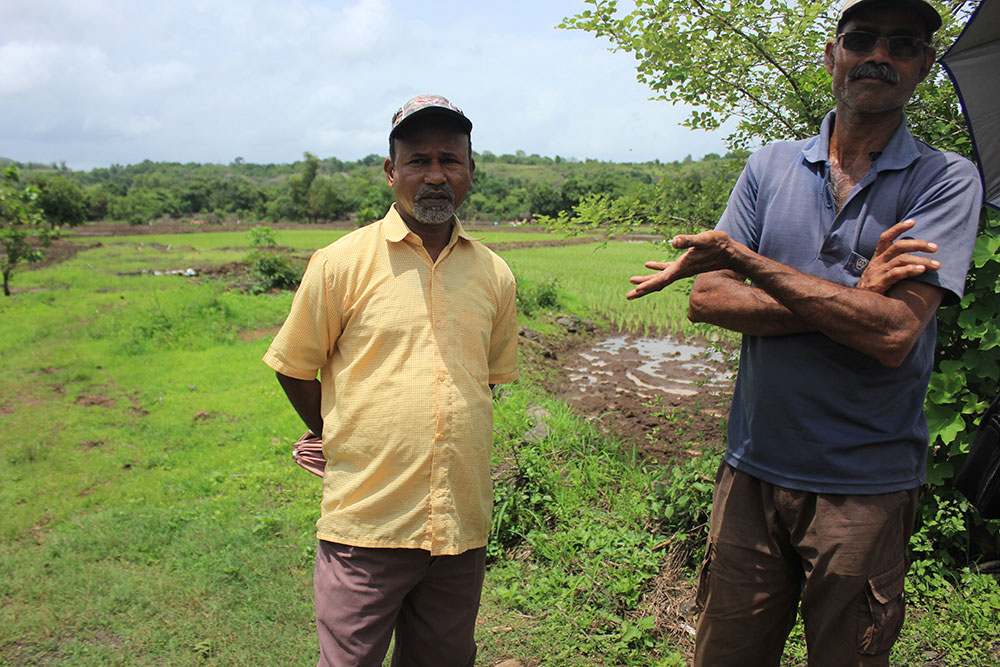 Chintaman Menske does not want to give up land for DMIC

The six states involved in the Delhi-Mumbai Industrial Corridor have already set up several industrial estates – many of which have floundered. Farmers and activists point out that not enough jobs were created, and after businesses failed, they laid off the few employees they had hired.

That's the situation in the Chikalthana Industrial Area, which was established in Aurangabad 25 years ago. When it was set up, farmers whose lands were acquired were promised jobs in the factories that replaced their cropland. But today, many of the units have shut shop. Others have cut staff drastically to reduce their losses. While the authorities do a great deal to help entrepreneurs set up factories by giving them subsidies, they do little to sustain them, said Mukund Kulkarni, a former chairman of the Chamber of Marathwada Industries and Agriculture.

For factories to thrive, capital, infrastructure and markets are vital, he argued. However, the government falls very short when it comes to infrastructure generation, Kulkarni said.

For instance, power shortages have long been a problem in Aurangabad. When Chikalthana was set up, even though the government offered a subsidy on electricity and water supply, there simply wasn't enough power or water for all the manufacturing units, he said. As a consequence, several units had to operate at far under than their production capacities, resulting in losses, Kulkarni said.

Sometimes, it is cheaper to pack up and leave rather than staying put and producing, said Agarwal.

However, activists have a different point of view on why factories often fold up fairly quickly. In their initial years, factory owners often get financial assistance and subsidies from the state government. But when it becomes time to repay their loans,  "they would rather file bankruptcy, pack their bags and set up shop elsewhere with some more financial help from the government”, said Tapan Bhhattacharya, a farmers rights activist in Indore who has been tracking the bankruptcy claims of at least three dozen units in the Pithampur industrial area in Madhya Pradesh.

In 2014, the governor of RBI, Raghuram Rajan criticised India’s bankruptcy process for precisely this reason.  He had said that the system benefits the promoters of factories, while being unfair to lenders.

There is another reason the employment being promised may not be generated. The DMIC is being built to make it easier for manufacturers to send their goods abroad.  But activist Rishit Neogi of the National Alliance for People’s Movements said that because of this disproportionate emphasis on exports, the DMIC will only encourage large industries. Small-scale industries, which generate more employment, aren't part of the plan.  “I am not sure how DMIC will help them," he said. "They certainly can't give the volumes that would justify the freight corridor’s magnitude or scale of the industrial hubs.”

According to Agarwal of Pricewaterhouse Coopers, there is a lack of co-ordination between the states and the Centre in the conceptualisation of such industrial corridors.

“The states still look at these mega industrial projects as Central initiatives, which is not their priority,” he said. That needs to change. “Industrial nodes of the Centre and state should be complimentary and not competitive. That will maximise the output."

Citing the example of Gujarat, Kumar said despite the fact that Dholera is being developed as a smart city by the Centre, the state government has made excellent progress in acquiring the land. “They do not see this as a project by someone sitting somewhere in Delhi,” he said. "They are very involved."

This is the last article in a four-part series on the Delhi-Mumbai Industrial Corridor. You can read the other parts here.