According to recently released data from Euromonitor International, India’s market for emergency contraceptives jumped 88% to $104.4 million (Rs 667 crore) between 2009 and 2014, ranking the country third in the world after the US and China. Together, these three countries accounted for about 73% of global emergency contraceptive sales. 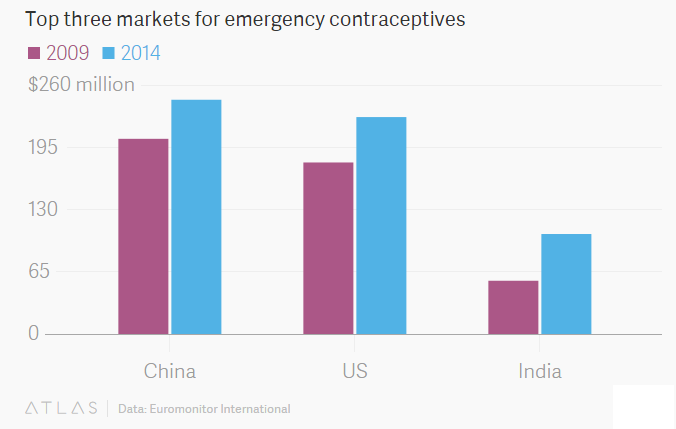 India is among the fastest-growing markets for these contraceptives, with a compound annual growth rate (CAGR) of 13.4% between 2009 and 2014, according to the market research firm.

Here’s a chart that shows how that compares with the CAGR for the US and China.

In India, where sex before marriage remains a taboo subject, women are more likely to opt for emergency contraceptive brands, such as i-Pill and Unwanted 72, which are easily available over the counter without a doctor’s prescription.

Pharmaceutical company Cipla helped create the emergency contraceptive market in India in 2007 when it launched the i-Pill. Priced at Rs 75 (just over a dollar), it quickly became the country’s largest-selling morning after pill, with a little help from advertising campaigns in everything from print to metro trains and taxis.

By the time Cipla sold the i-Pill to Piramal Healthcare for Rs 95 crore in 2010, the brand was racking up Rs 30 crore in sales.

Given the conservative attitude towards sex in India, the popularity of the i-Pill and its ilk is unsurprising. These emergency contraceptives save women from awkward visits to gynaecologists, many of whom are known for asking their patients whether they’re married in lieu of asking whether they’re sexually active.

“We cannot ask whether a woman is sexually active – we’re still in India, we live in a conservative society,” Chitra Ramamurthy, senior consultant at the obstetrics and gynecology department at Apollo Hospital, Bengaluru, told The Ladies Finger in June.

However, this institutionalised prudery could be taking Indian women down a dangerous road.

Emergency contraceptives can change hormonal patterns and even lead to the development of polycystic ovary syndrome if used too frequently, which often happens in India where the i-Pill and others like it are used instead of regular contraception. On top of this, the pills leave women vulnerable to sexually transmitted diseases.

But despite these risks, the growing popularity of emergency contraceptives shows no signs of slowing down.

Why India's family planning program is unhappy with parents