Contribute Now
Ad
For much of human existence, we have, like teenagers, focused on exploring our identities as individuals, examining what it means to be Indian, American, female, Christian, engineer, artist and countless others. Now, the world is staring down the barrel of dystopia, unless we mature to become “an adult planetary species” and work together across those individual boundaries to achieve common goals.

This is the stark message from the 2015/16 State of the Future report, published by the Millennium Project. The good news is that we do have the resources to address our global challenges – but only if we work quickly, and on a grand scale.

The Millennium Project was established as a global think tank in 1996. Since then, about 4,500 futurists, scholars and business planners from UN organisations, governments, corporations, NGOs, think tanks, universities and more have contributed to the project’s mission to:

The project’s annual report provides us with a scorecard for life on Earth. According to CEO and lead author Jerome Glenn, the latest publication may have “more data, information, intelligence, and wisdom about the future of the world than has ever been assembled in one report”.

This colossal dataset is integrated into a list of 15 “Global Challenges” and contributes to the State of the Future Index, marking out areas of life where we are “winning”, “losing” or experiencing “unclear or little change”.

Within these areas, the data tell complex stories about the way our world is changing. For example, if you compare the trends in employment, we are increasing the percentage of people in high-skilled employment, but making little progress on unemployment in general. 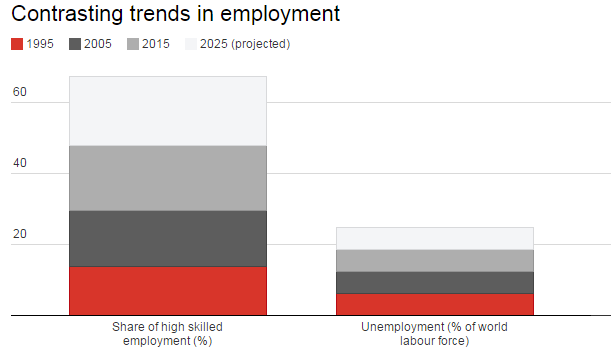 Overall, the 2015 SOFI graph below shows an improvement in general human welfare over the past 20 years, and the next ten years. The report suggests that, on balance, humankind is winning. Yet the figures behind the index demonstrate that this rise comes at the expense of the environment, and with worsening intrastate violence, terrorism, corruption, organised crime and economic inequality. Shockingly, the biggest cause of deaths and casualties per year – greater than any war – is violence against women. So whatever our plans for the future, they need to include a focus on reversing these negative trends. 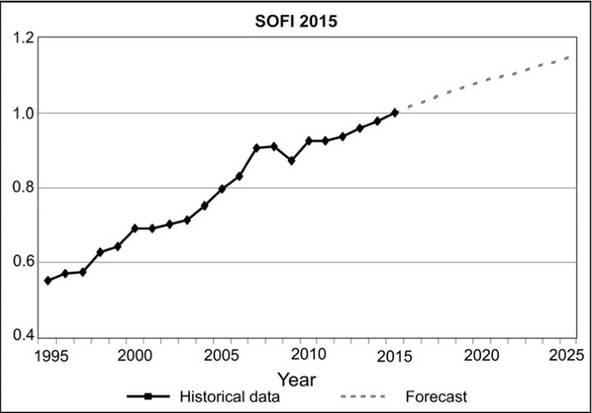 There were only 1 billion humans in 1804; 2 billion in 1927; 6 billion in 1999 and 7.3 billion today. According to current predictions, by 2050 there will be an additional 2.3 billion people on the planet. Divide all your friends and family into households of three and add one person to each. Now imagine that multiplied around the world and you have roughly the equivalent figure; a one-third increase in population.

The obvious question is, how do we support such formidable expansion? From new forms of terrorism and artificial intelligence, to climate change and financial ethics our lived environment and the challenges we face will change and evolve as rapidly as our numbers increase. The systems that we have now for food, water, energy, education, health, economics and global governance are not built to cope with this growth, and require a radical change in thinking if we are to avoid massive and complex humanitarian and environmental disasters. Business as usual will not suffice.

But there is hope. The Futures Research carried out by the Millennium Project indicates that this shift is absolutely achievable, even going so far as to say that “a far better future than today is possible”:

Brilliant insights, policy and social innovations, scientific and technological breakthroughs, and new kinds of leadership are emerging around the world. The interactions among future artificial intelligences, countless new lifeforms from synthetic biology, proliferation of nano-molecular assemblies, and robotics could produce a future comparable to science fiction today.

Coordinating and implementing change on this scale comes at a cost. As soon as 2016, the world’s richest 1% will have more money than the rest of the world put together. By 2050, the report tells us, the three biggest economies on the planet will be China, India and the US, each of them with a greater GDP than the next three largest (Indonesia, Brazil and Mexico) combined. In order to achieve positive change across the list of global challenges in this period of massive population growth there must be a long-term strategic plan that includes both the rich and the poor, with internationally coordinated action. More than ever, the world’s leaders need to focus on outcomes over rhetoric.

Everyone who can needs to read this report, or at least the executive summary. The thousands of variables present an almost infinite variety of futures on a continuum that will affect us all. Each and every individual can make a difference to the state of the global future, as long as we act in favour of common goals. We need to become educated and participatory world citizens and think outside the confines of local context to call on our leaders to take global action.