Contribute Now
Ad
This is the golden age of transport options. Forget buses and metro or owning your own car: Uber, Ola and the likes are trying to sell themselves as even cheaper than auto rickshaws, in addition to the convenience of getting an air-conditioned cab within minutes of tapping your phone. But are they really?

Taxi aggregators like Ola, Uber and TaxiForSure claim to be providing more than 10 lakh rides daily, with Ola alone saying it carries out 7,50,000 rides each day. In getting so popular, these services claim that they offer transparent pricing, ensuring what-you-see-is-what-you-pay, sparing one the trouble of having to badger the driver to ply by the regular fare instead of overcharging.

For instance, Ola Mini is available for as low as Rs 10/km in Delhi while Uber’s lowest fare starts at Rs 7/km for UberGo which the company claims is cheaper than auto fares. However, that’s not always the case given multiple hidden charges which end up bumping the final bill to an amount that you may not have expected while booking the cab.

At first glance, a Rs 7/km fare for an air-conditioned hatchback looks cheaper and more lucrative than hailing an auto at about Rs 8/km. However, that’s not the only thing that the cab companies charge one for.

First, the companies usually begin with a minimum fare. Then, both Uber and Ola have a waiting charge that isn’t really a waiting charge. One expects waiting charges to apply when the car is not moving, but in these cases, it usually applies to the entirety of the cab ride, and it ranges from Rs 1-2 per minute. This means that an hour-long ride would end up costing one an extra Rs 60-120 depending on the cab one books. 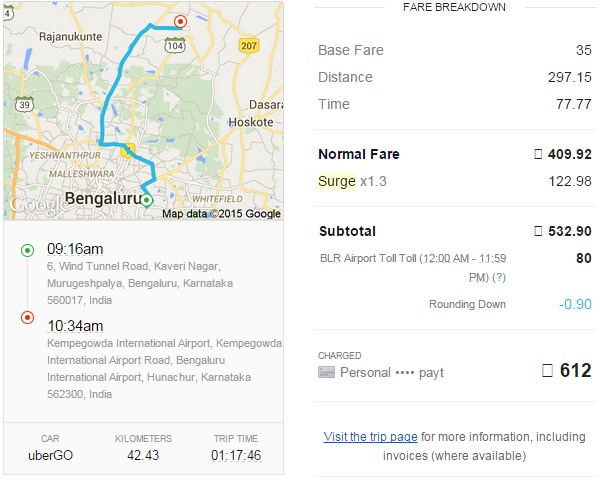 For instance, in the above bill for a trip in Bangalore, Uber charged Rs 35 as the bare minimum fare (it is Rs 40 in Delhi now) for hailing a cab, Rs 297 for the 42 kilometers travelled and an extra Rs 78 for the time taken. This totals to Rs 410 approximately.

By the time the trip ended, with extra charges for surge pricing and airport toll in effect, the final cost came out to be over Rs 600 at Rs 14 per kilometre for the rider even though the cab’s fare was only Rs 7/km.

By comparison, an auto would have only cost around Rs 545 even after including the Rs 25 minimum fare for the first two kilometres. Autos also have a waiting charge, but it’s more true to the term, i.e. only applies when the vehicle isn’t moving, and is charged at Rs 5 per 15 minutes in Bangalore.

In its defence, Uber said that its pricing is transparent and the claims about being cheaper than the autos were made according to its calculations last year. "Based on calculations we had done for uberGO during launch (last year), our blog made it clear that in some instances prices on uberGO are on par with Autos (marginally more)," said Karun Arya, Communications Lead - South Asia and India at Uber.

He further added that surge pricing isn't applicable at all times and fare estimates are provided within the app to ensure transparency. "Dynamic pricing is something that fluctuates and is not in effect at all times, so taking that into account wouldn't be accurate," he said. "However, our pricing across products is totally transparent and riders can even get a fare estimate in-app."

But this isn’t all. If you are hailing an Ola cab, be ready to pay a little bit more towards Service Tax too which is chargeable over and above the final bill amount at the applicable rate as seen in the screenshot of a recent bill below.

Moreover, be ready to pay a lot more than you usually do if travelling at odd hours or peak timings as Uber and Ola both charge extra in periods of high demand or insufficient supply, which they claim helps keep more drivers on the road by providing them an incentive of higher fare. Many have, however, criticised the surge pricing in emergency situations such as the recent rains in Mumbai when Uber’s surge pricing kicked in and fares increased by almost threefold leading many to lament that Mumbai's local kaali-peeli taxis are still relevant and in some conditions, better than taxi aggregators.

In normal situations, however, it is common to spot surge pricing in effect at busy areas during peak hours or while hailing a cab from less crowded area later in the night when there aren’t too many cabs available. 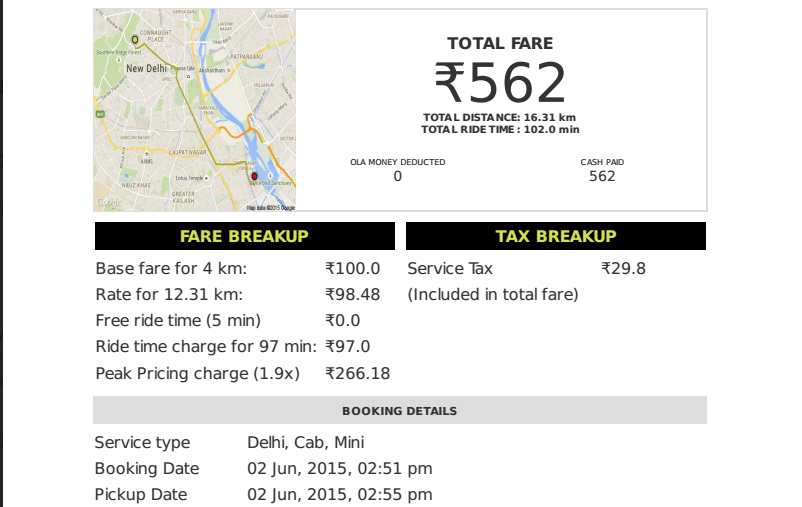 The above bill is one such instance where a surge multiplier almost doubled the final fare bringing it to Rs 562 for 16 kms resulting in a total cost of about Rs 35/km for the user. While the cost would have been Rs 17/km in case surge pricing wasn’t in effect, it is still 70% more than the advertised rate of Rs 10/km.

For perspective, a kaali-peeli taxi in Delhi costs Rs 14/km and has no travelling time charge even though it charges a minimum waiting charge of Rs 15 on the bill.

By comparison, a Meru cab starts at Rs 69 for first three kilometres and then charges Rs 23/km as well as a waiting charge of Rs 30 per hour.