Contribute Now
Ad
Every July and August, Goa becomes a vibrant marketplace for muddy mushrooms. Hawkers sell the fungi, wrapped in large green teak leaves, on the pavements of Panjim and on the edges of busy highways, as Goans stop by with wallets on the ready. For them, the seasonal olmi or wild mushrooms are well worth the exorbitant price.

Fleshy olmi mushrooms have long been a part of the Goan menu. They are popular as a replacement for chicken in the traditional Goan xacuti, a thick, heavily spiced, coconut-based gravy, especially during the month of Shravan, when many Hindus turn vegetarian. The mushrooms are also eaten fried or served in a soup.

These Termitomyces mushrooms are endemic to the Western Ghats, where the thick forest cover and high humidity provides an ideal breeding ground. The mushrooms are picked in the forests of Goa, Maharashtra and Karnataka and then brought to Goa, where the demand and the prices are high. Most Goans know the flavour, but what they don’t know is that the Termitomyces grow on termite hills. That’s why it has been so difficult to nurture them in artificial conditions. 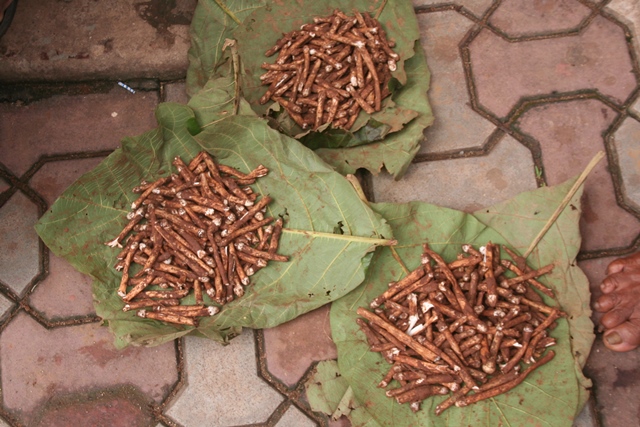 Termite hills are considered sacred in many cultures, including in Goa. “They are venerated as the spiritual abode of goddess Santeri by the local people in an age-old prehistoric fertility cult of the earth mother goddess,” said Dr Nandkumar Kamat, a microbiologist, a professor at Goa University, and a leading expert on Goa’s wild mushrooms. “The lifecycle of these mushrooms has been shown to be an ‘ecological magic’ for the cult followers in Goa and south India.”

Dr Kamat has studied Termitophilic mushrooms extensively since 1986 and has documented over 35 varieties. Over the last few decades, the popularity of the fungi has led to a decline in the number of species sold in the market. Dr Kamat says that in 1986, a random market survey revealed 15 species, but in 2004, barely five species were available. Prices, of course, have increased proportionately from Rs 5 for 100 mushrooms in 1975 to Rs 450-Rs 750 for 50 mushrooms this year.

In the past, the mythological lore around goddess Santeri protected the termite mounds – but no longer. The overharvesting of the wild mushrooms prompted the government of Goa to ban the plucking of mushrooms in 1992. The ban was amended in 1993 to be limited to wildlife sanctuaries in the state, though no embargo was placed on the collection of mushrooms for self-consumption of people living within the sanctuaries. The enforcement of the ban has proved to be a problem, with little political support and the high demand making it a lucrative seasonal trade for villagers and forest dwellers.

“We don’t allow anything to go out of the sanctuaries,” said Prakash Salelkar, Range Officer at the Netravali Wildlife Sanctuary. “The tribals living in the sanctuaries have a stake in the edible plants, which they harvest for their own consumption but not for sale outside.”

In Panjim, the mushrooms are sold, ironically, right outside the District and Session court. Farmers from nearby villages of Taleigao source the mushrooms from vendors in the forested areas. “I got these mushrooms from someone in Mollem,” said Laxman, an elderly farmer who has been selling the fungi for decades. “We have to get there at 5 am to buy them from villagers from Mollem and Sancoale.” Mollem is home to the Bhagwan Mahaveer Wildlife Sanctuary and another elderly vendor, perhaps aware of the ban and its implications, is quick to point out that the mushrooms she is selling are from Banastarim, around 16 km from Panjim.

In addition to the ban, the Goa government has made efforts to promote the production of oyster mushrooms as a sustainable alternative. According to Dr Kamat, oyster mushrooms can be grown for 10 months of the year on simple raw materials like paddy straw. These mushrooms, however, are no replacement for the wild ones, whose texture and seasonal availability make them irresistible for locals.

“Once wild mushrooms become part of ethnomycophagic [myths and legends about mushrooms] tradition, it is difficult to reverse the habit,” said Dr Kamat. No wonder then that despite the ban, the high prices and the chore of several rinses to get rid of the forest mud, the sales of mushrooms continue to be brisk this year.