Contribute Now
Ad
India’s already-heaving metropolises are among the fastest growing cities in the world.

But before decades of extensive construction (and re-construction), large-scale migration, and rapid economic expansion entirely transformed them into the cities they are today, what did the early days of these urban agglomerations look like?

Some incomplete but decidedly interesting answers can be gleaned from centuries-old maps, a handful of which are currently displayed at New Delhi’s National Museum. Courtesy of the museum’s newly opened “Cosmology to Cartography” exhibition, here are some early maps of India’s biggest cities, accompanied by short excerpts from the exhibit’s catalogue. 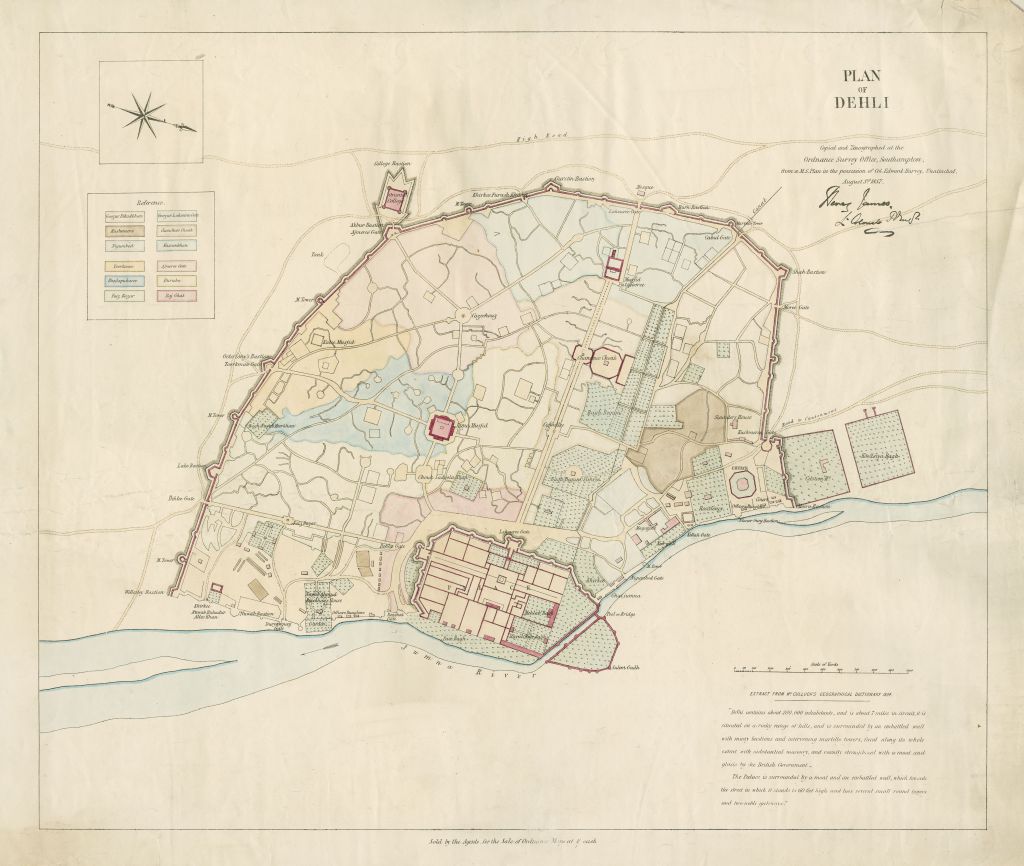 Plan of Dehli, copied and zincographed at the Ordnance Survey Office, Southampton.

A fine plan of Old Delhi issued during the Siege of Delhi, a major event of the Uprising of 1857:

This intriguing plan depicts “Old Delhi” as it appeared during the Great Uprising of 1857…Delhi as depicted here was founded in 1638 by the Mughal Emperor Shah Jahan in order to serve as his new capital city. Named as Shahjahanabad, it was comprised of seven square miles enclosed by great walls. The city was dominated by the colossal Red Fort, the imperial palace constructed in 1648, that straddles the Jumna (Yamuna) River, in the lower part of the plan. The rest of the city was composed of a dense warren of streets interrupted by a few broad avenues, fine gardens and magnificent mosques. 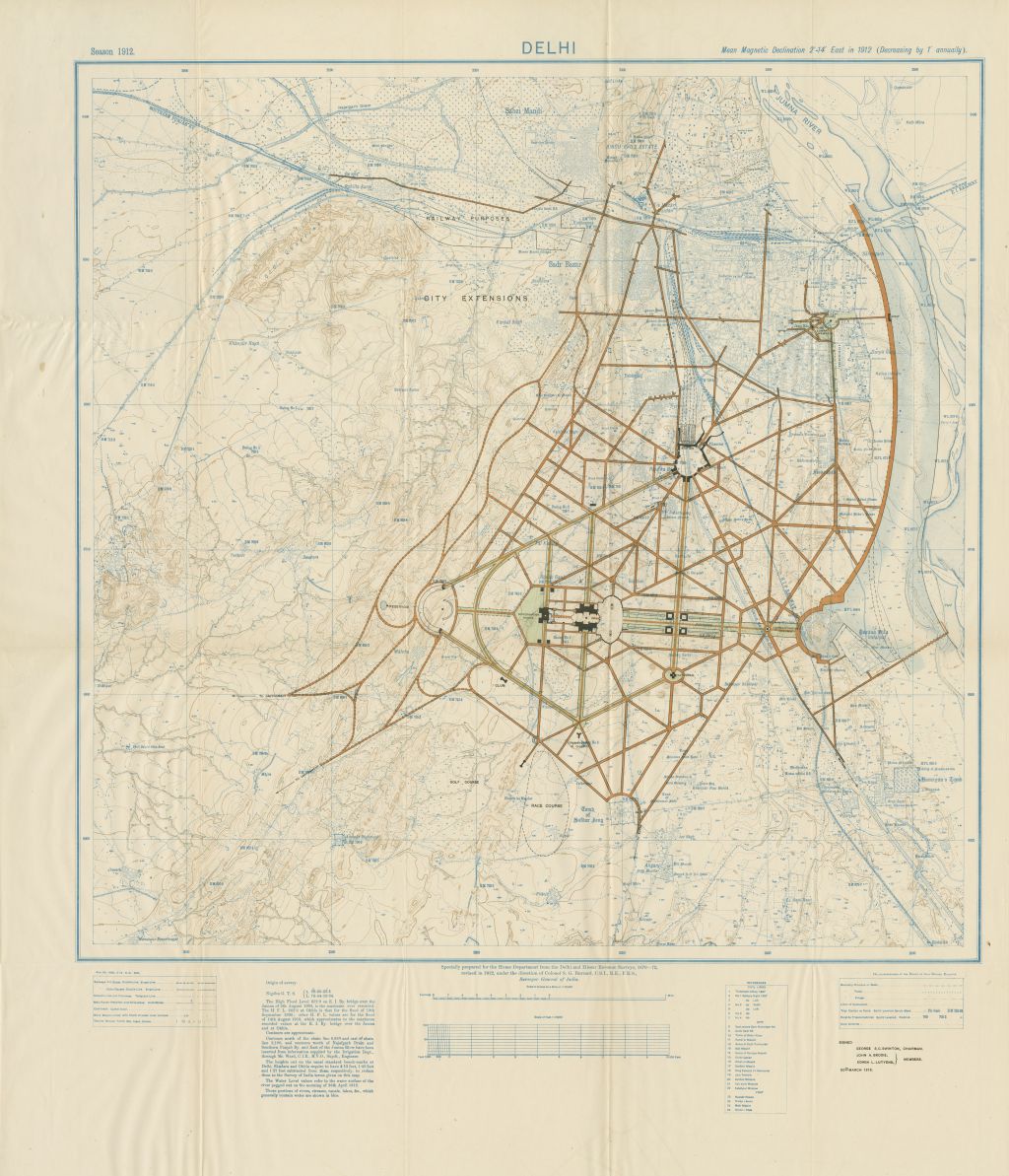 Lutyenss plan literally projects British imperial power over the existing Indian landscape. A profoundly powerful image, it shows in bold red lines the network of broad boulevards, running between grand edifices literally overwhelming all aspects of the countryside, which is presented in pale blue. Indeed, the new imperial city literally bulldozed ancient villages and ploughed over farms that had been worked for centuries. At the same time, it strategically preserved an integrated import Mughal monuments, such as Humayun’s Tomb, into the new city, symbolically legitimising British power by showing it as the rightful successor to the Mughal imperial mantle. 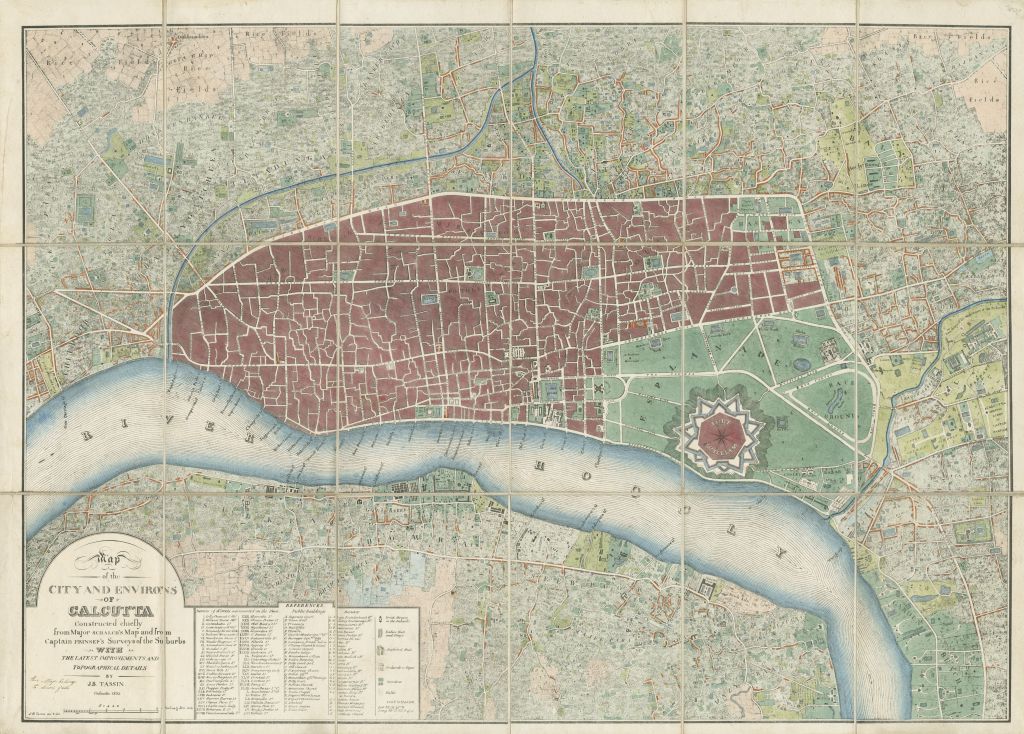 Map of the city and environs of Calcutta constructed chiefly from Major Schalch’s map and from Captain Prinsep’s Surveys of the suburbs.

A masterpiece of early Indian lithography and colouring, and an exquisite rendering of the important Schalch-Princep survey of Calcutta:

The map provides an extremely detailed portrayal of Calcutta, which was then the capital of the “Company Raj” and India’s preeminent commercial and cultural centre, with a population of almost 200,000. The city proper, comprised of densely populated urban blocks coloured in red, is confined by the Hooghly River and the New Circular Canal. The great citadel of Fort William, built between 1757 and 1764, rises out of the middle of the Esplanade on the south side of town. True to European Enlightenment era urban models, Calcutta is traversed by several broad thoroughfares, although by contrast most of the city is comprised of narrow, curving streets and alleyways, common to many traditional Indian cities. 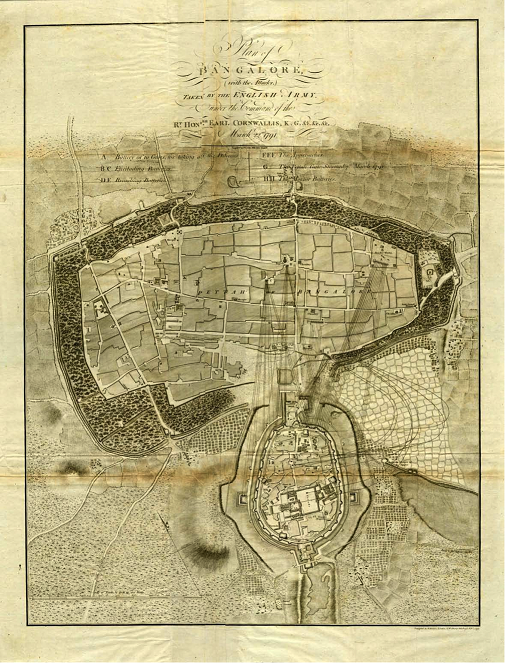 Plan of Bangalore (with the attacks) taken by the English Army under the command of the Earl Cornwallis.

The most detailed and accurate early map of Bangalore, and one of the finest plans depicting a major Indian city prior to the influences of contemporary European urban planning:

This fascinating map of Bangalore grants a magnificent impression of a sizeable Indian city prior to it being influenced by European urban models. The large pettah in the upper centre is encircled by an elaborate system of walls and takes on an overall ovoid shape common to many such Indian cities. Within are dense and uneven blocks divided by narrow streets, a labyrinth which was ideal to confuse potential invaders who dared to storm the city. A connecting ovoid palace-fort complex projects off of the main pettah to the south.