*It has India’s third-highest level of poverty

*Unemployment in Bihar is the highest among the poorest states

*98% families in rural Bihar do not have access to toilets in their homes, the highest rate among poor states.

The eastern state of Bihar – India’s 3rd-most populous with a population equal to Philippines – is the focus of attention as its assembly is up for re-election soon. A bruising political battle is ahead, the biggest political test for Prime Minister Narendra Modi since he swept to power in 2014.

While Chief Minister Kumar is credited with turning around the economy of Bihar, the state is still at the bottom rungs of India’s poverty ladder, unemployment and public and personal infrastructure – from highways to toilets at home.

Bihar grew faster than most other poor states

Eight socio-economically backward states of Bihar, Chhattisgarh, Jharkhand, Madhya Pradesh, Orissa, Rajasthan, Uttaranchal and Uttar Pradesh are referred to as the Empowered Action Group (EAG) states. The central government constituted the EAG under the Ministry of Health and Family Welfare following the 2001 Census to stabilise the population in eight poor states struggling to contain a population explosion.

We will compare the performance of Bihar to other members of the EAG group and assess how the state has performed over the past 10 years.

Bihar’s gross state domestic product growth is the second highest among EAG states at 9.9%, second only to Madhya Pradesh, which clocked a growth rate of 11%.

“There is a difference between base levels and increments but as increments go, there is no question that some historically backward states – in particular Rajasthan, Bihar, Madhya Pradesh and Chhattisgarh – are growing fast,” according to Bibek Debroy, economist and NITI Aayog member, speaking to The Hindu.

If we look at the break-up of Gross State Domestic Product, services form a major part for all the eight states, with the exception of Jharkhand.

Bihar’s services sector delivers almost 62% of the total GSDP for the year 2013-14. This is followed by agriculture with 16%.

Bihar has the highest unemployment among India’s poorest states

Bihar has the highest rural and urban unemployment among EAG states. 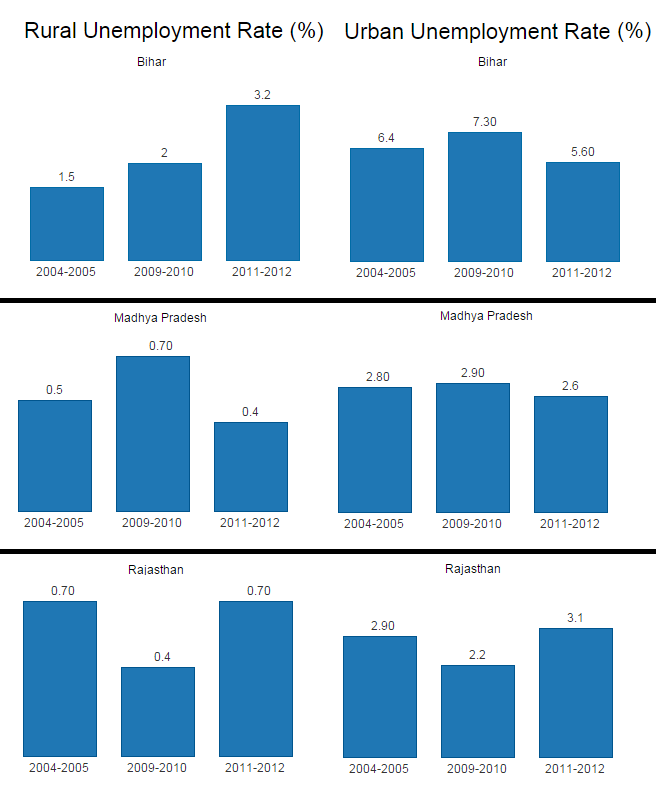 The opposite is true in rural areas: the unemployment rate has gone up from 2% to 3.2%. 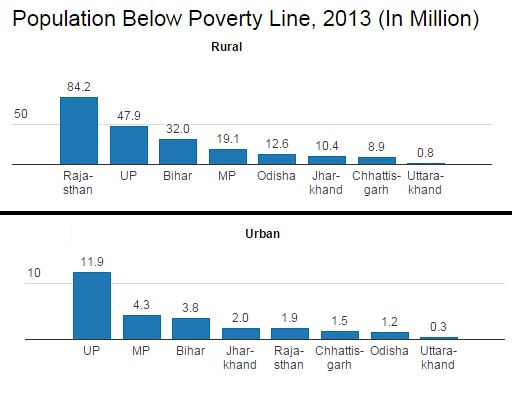 As many as 32 million people below the poverty line in Bihar live in rural areas.

If we look at data from the 2004-05 poverty estimates, Bihar was the poorest state, with 54% of its total population below the poverty line.

Bihar has received accolades for poverty reduction. However, compared to other EAG states, Bihar still has the second-highest number of people below the poverty line, 35.8 million, after Uttar Pradesh at 58.9 million.

When we compared the number of people pulled out of poverty since 2004-05, estimates show that Rajasthan and Odisha have performed better by pulling out almost 51% and 37% people, respectively, out of poverty.

Bihar has managed to pull out only 26% of its people out of poverty.

In personal and public infrastructure, Bihar struggles to catch up

While the economy is doing well, Bihar still lags behind in the development of infrastructure.

We have compared two key aspects to highlight the backwardness:

*Toilet facilities in households as part of social infrastructure.

Roads: Maharashtra accounted for the largest share (22.9 %) of state highways as on March 31, 2013, according to data released by the Ministry of Road Transport. 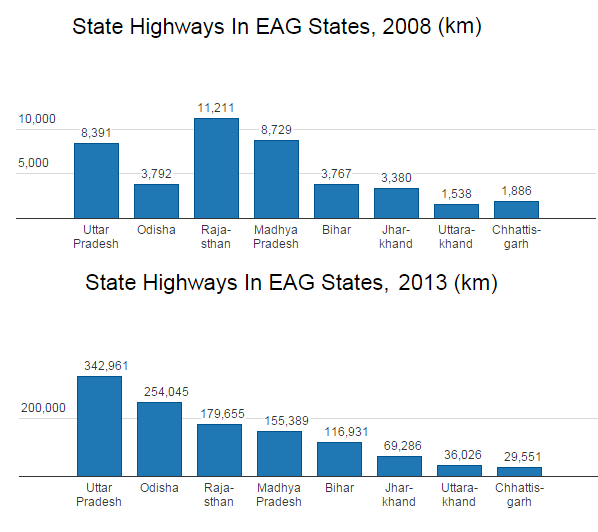 Bihar did well in surfacing highways–surfaced roads, the term used in the ministry reports, refers to metalled roads or roads with bituminous or cement concrete tops–until 2008. That pace slackened over the next five years to 2013: 193,000 kilometres of state highways were built but no more than 61% were surfaced.

Toilets: As many as 98% of families in rural Bihar do not have access to toilets at home, the highest rate among EAG states.

There are 16.8 million rural households in Bihar, according to 2011 census data. Of these, 16.4 million are without toilets, according to target achievement data under Swachh Bharat Abhiyan.

There are 16.8 million rural households in Bihar, according to 2011 census data. Of these, 16.4 million are without toilets, according to target achievement data under Swachh Bharat Abhiyan.

(The second part of this three-part series will focus on social indicators such as education, health and crime)

India slid behind on human rights in 2015, says Amnesty International