Become a Member
Ad
When Jabbar Patel’s black-and-white Marathi debut film Saamna was released in 1974, it failed to enthuse the audiences. But a German delegation that saw it was clearly impressed by the performances of Nilu Phule and Shreeram Lagoo, who played the protagonists, and the film was selected for the 25th Berlin Film Festival. Perhaps it was that, or a slow build-up of word-of-mouth, or both, that made the film a hit when it was re-released in 1975. From there it went on to win three national awards, seven Maharashtra State awards and three Filmfare awards.

Saamna was a film of its times. The prevailing socio-political scene that had created anger and frustration amongst rural communities underpinned its story, screenplay and dialogue, written by Vijay Tendulkar. If Saamna showed us the politics of rural Maharashtra, Deewar, also released in 1975, brought Bombay’s ferment to the surface. If Saamna pitted the chairman of a sugar cooperative against a Gandhian hobo, Deewar pitted an honest police officer against his rebellious, law-defying brother.

The seventies had seen the proliferation of cooperative sugar factories in the sugarcane growing districts of western Maharashtra. The government-initiated and seed-funded model for rural development, which began with the founding of the Pravara Sahakari Sakhar Karkhana in Ahmednagar district in the early 1960s, had revealed its exploitative underbelly by the seventies. Sugar factories led the all-encompassing takeover of the rural economy with the burgeoning of poultries, wineries, cooperative banks, schools and colleges. The chairmen of sugar factories, known in the media as sugar barons, were typically Congressmen, dressed in dhotis and Gandhi caps, but far from Gandhian in their practices. Hindurao Dhonde Patil of Saamna, played by the redoubtable Nilu Phule, is Tendulkar’s take on this tribe.

Dhonde Patil rules his fiefdom with a combination of wile, arrogance and a barely sheathed show of muscle, cunningly disguised as soft-spoken humility. He buys off would-be opponents; but when somebody refuses to be cowed down, he eliminates him mercilessly. Brother Sarjerao is always on hand to execute the task. Maruti Kamble, a jawan who comes home on crutches from a battle that has cost him his leg, becomes a thorn in Dhonde Patil’s side. 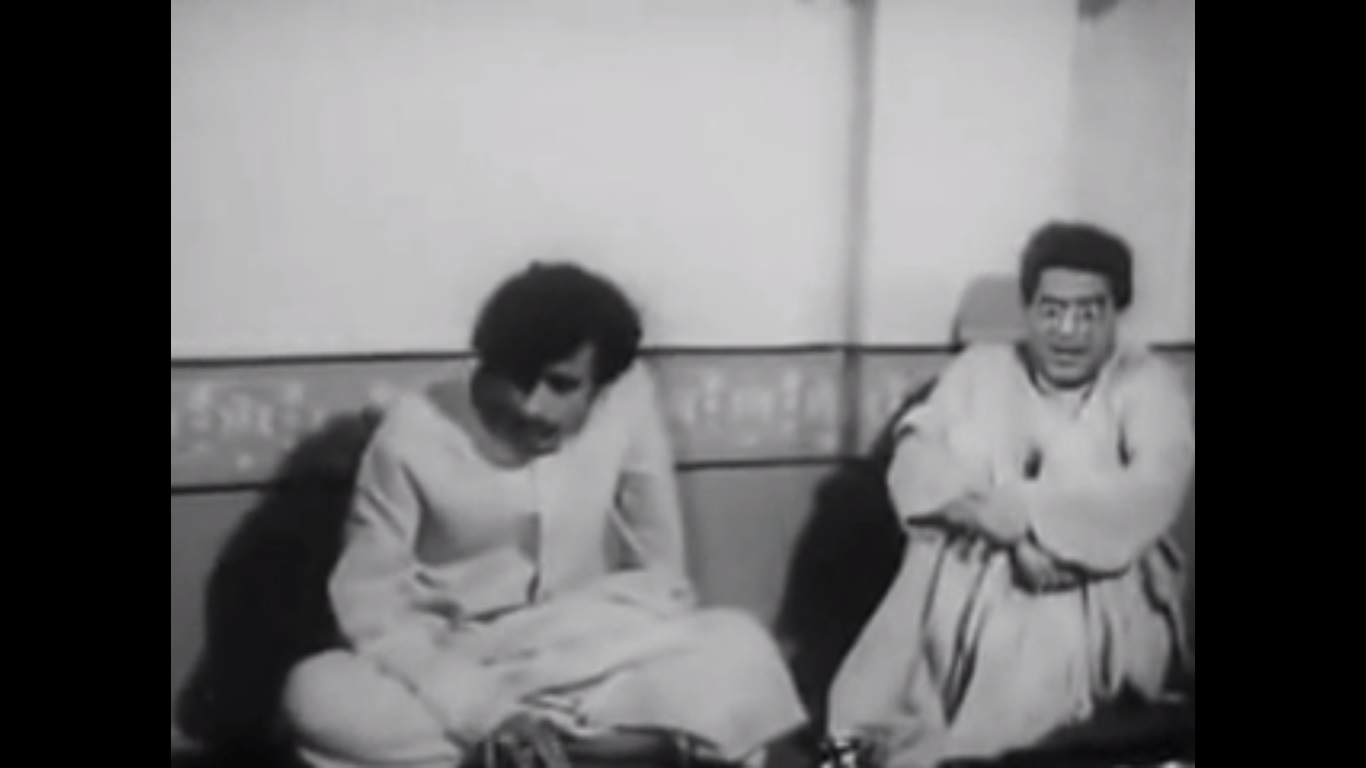 The Dalit community to which he belongs has no stake in the new economy. Sugar cooperatives benefited only farmers with large land holdings, predominantly Marathas. Dalits had very little land, if any. In the earlier rural economy they had been marginalised socially for their caste. Sugar cooperatives, which promised so much to so many, marginalised them economically as well.

Kamble challenges Dhonde Patil for his exploitative practices and is eliminated. People whisper about the mystery of his disappearance, but nobody has the courage to question the boss of all things. Ultimately, the man who does so is a hobo who turns up in Dhonde Patil’s fiefdom, overhears the villagers’ whispers and begins to prod and probe.

The hobo is played by Lagoo. He has created a body language and voice that are the exact opposite of Dhonde Patil’s expansive style. As an outsider, he instantly arouses suspicion. Dhonde Patil decides that the best way to keep an eye on him and to ensure that he does not make trouble is to invite him into his palatial home as a respected guest. The idea is to draw him into his web of control. However, his every attempt at doing this is mocked and resisted by the hobo, who holds on tenaciously to his independence. 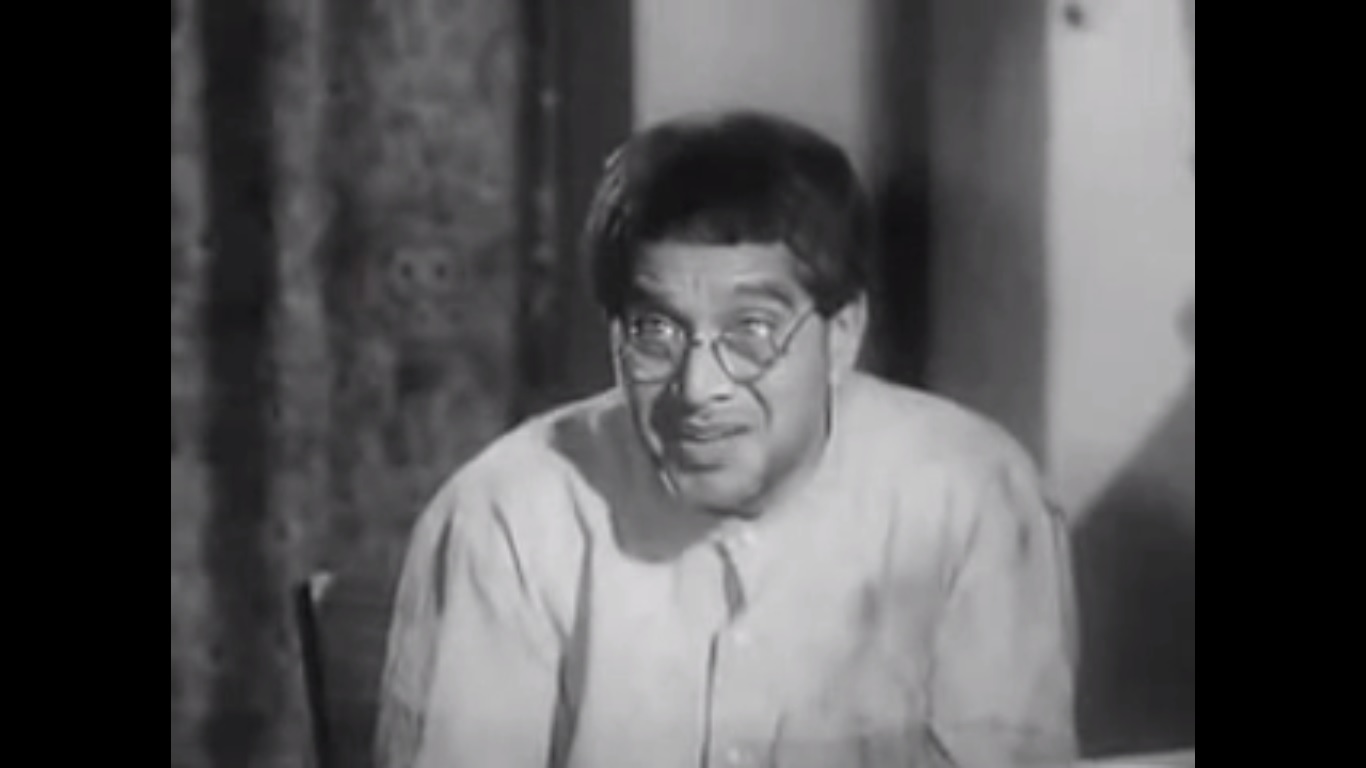 Tendulkar has conceived the hobo more as a representation of a moral force than a real person. It is for this reason that the man refuses to reveal his name. Dhonde Patil then decides to call him Mastar. When Dhonde Patil asks him where he comes from and where he is headed, Mastar tells him he has come from pre-Independence times and is headed for the end of his time on earth. When Dhonde Patil claims it is he who has brought life to what was once a barren land, Mastar congratulates him on his pride in mock awe. “Not pride,” says Dhonde Patil. “Just facts.”

Mastar is in many ways a romantic figure, down to the bottle of desi narangi-mosambi which he carries in his cloth bag, otherwise empty of possessions. Like Dhonde Patil, he too is dressed in a khadi dhoti and Gandhi cap. But when Dhonde Patil says, “You appear to be a Gandhian,” he laughs off the observation, saying he wears khadi only because that is all he can afford. He thus dissociates himself from neo-Gandhians like Dhonde Patil. The two men spar continuously, Mastar with a sharp, circumlocutious tongue, while Dhonde Patil nimbly side-steps his assaults. However, when Mastar begins to question him directly about Maruti Kamble, it is time to shut him up. This leads inexorably to a denouement in which Dhonde Patil accepts defeat and Mastar returns to his journey towards death.

Saamna was a film of its times not only for its critical observation of the contemporary socio-political scene, but also because it evidenced a belief in idealism that was already fraying at the edges. After all, what power does Mastar have over Dhonde Patil except for the moral power of truth? In these times, when truth is habitually refuted by politicians even in the face of audio-visual records, the idealism that fires Saamna’s denouement dates the film more than anything else. Otherwise, even today, it holds our attention, except when it becomes theatrical in its dialogue and shot taking. This happens in the crucial confession scene in which Mastar is in soft focus in the background like the catalyst who has set off a reaction; and Dhonde Patil is in the foreground, fronting the camera and speaking to the air as it were.

On the Marathi proscenium stage where actors are not supposed to turn their back to the audience, the most important speeches are delivered facing the audience with the characters spoken to listening from the back. In the film, the depth of focus and richness of background detail that otherwise fill cinematographer Suryakant Lavande’s frames, turns visually flat and uninteresting.

What stays with you at the end of the film besides the performances of the two stalwart actors and the sharpness of the dialogue are two songs. The theme song written by Aarti Prabhu (playwright-novelist CT Khanolkar’s pen name for poetry), composed in a haunting melody by Bhaskar Chandavarkar and sung by a fresh-voiced Ravindra Sathe, poses philosophical questions:

“Why do some people carry other people’s burdens on their shoulders? / Why put down your tent in a place like this / Where a man dies spitting blood for another? / There are men here grown to rottenness from within / how then do roses still continue to bloom? / Darkness gathers in this place, withering and stunting trees / And yet crazy pirs continue to challenge life / Swearing oath upon oath that they are kings.”

The other song is a satire on the Gandhi cap. Memorably sung by Shreeram Lagoo during a magic show for the villagers, it asks what lies under the cap, producing as answers a chicken, a bottle of alcohol and finally sugar, the sources of political power in Maharashtra.