Contribute Now
Ad
You’ve heard of the Great Barrier Reef – but what about its southern equivalent? The Great Southern Reef covers 71,000 square km. Its kelp forests contain unique and diverse marine life by global standards, and it contributes more than A$10 billion to Australia’s economy each year.

Although most Australians live and play around the Great Southern Reef, they have little awareness of its value and significance, and too few resources are allocated to understanding it.

This paradox has been revealed by new research in collaboration among scientists across southern Australia. 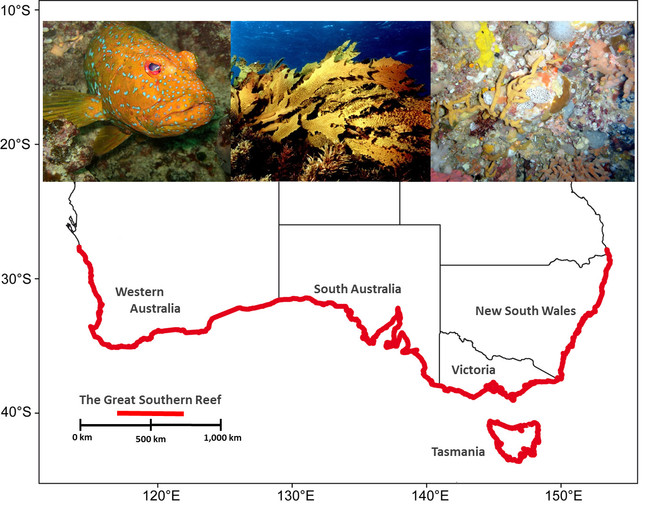 The Great Southern Reef (GSR) straddles five states across the southern coastline of the Australian continent. Kelp forests (middle) are a defining feature of the GSR. The reef is home to some of the most unique temperate marine organisms in the world, such as the endemic harlequin fish (left) and myriad invertebrates (right) (photos © T. Wernberg) Marine and Freshwater Research, doi:10.1071/MF15232

Kelp forests are the biological engine of the southern reef, producing as much as 65 tonnes of biomass per hectare per year, more than 16 times the yield from Australia’s most fertile wheat fields.

This biological powerhouse provides both a habitat and a rich food source in our coastal ecosystems, critical for the energy and nutrient cycles supporting the rich marine life of the reef and the wider ocean beyond shelf waters.

The reef is a global biodiversity hotspot for seaweeds, sponges, crustaceans, chordates, bryozoans, echinoderms and molluscs. Depending on the group, as many as 30-80% of species in these taxa are found nowhere else on Earth.

Due to its sheer scale and close proximity to almost 70% of the Australian population, the reef forms an integral part of Australian culture and society. It plays an important role in our national economy, supporting a broad range of tourism, recreational and commercial activities.

Just as the Great Barrier Reef is made up of almost 3,000 individual reefs dominated by corals, Australia’s numerous temperate reefs also form an entity of thousands of kilometres of rocky reefs dominated by kelp forests, inter-connected through oceanographic, ecological and evolutionary processes – truly a Great Southern Reef.

How much is it worth?

Remarkably, until now no one has valued the reef.

Accounting for direct value, such as from harvest of seafood, is relatively straightforward. For example, the two most valuable commercial reef fisheries are the rock lobster and abalone fisheries, which are worth approximately A$375 million and A$135 million per year, respectively - four times the value of all commercial fishing on the Great Barrier Reef combined.

Total tourism expenditure in coastal municipalities immediately adjacent to the reef represents an industry with activity around A$40 billion per year, and is particularly vital to regional economies along the reef.

Of course, not all tourism expenditure can be directly attributed to the Great Southern Reef. Nevertheless in regional coastal communities alone (excluding the big cities) total tourism expenditure is estimated at approximately A$9.8 billion per year. This includes reef-related tourism such as fishing, scuba-diving, surfing “reef breaks”, and whale watching.

In regional areas, such as Victoria’s Phillip Island, the Tasmanian west coast, and South Australia’s Kangaroo Island, the reef contributes around 15% to the total economic activity.

Approximately 70% of the Australian population live within 50 km of the southern reef. Roughly 5.3 million Australians regularly participate in recreational fishing on the reef, estimated to be worth around A$500 million per year.

Indirect values of ecosystems are harder to measure. We don’t currently include them in Australia’s GDP. For example, kelp forests represent significant carbon pools that could play an important role in greenhouse gas mitigation and nutrient cycling. These ecosystem services are likely to be of the order of several hundred billion dollars per year.

Have you heard of it?

Although most Australians live right next to the Great Southern Reef, and are thousands of kilometres away from the nearest coral reef, 81 – 99% of all reef-related news stories reported in Tasmanian, Victorian and South Australian newspapers focused on coral or coral reefs.

Perhaps as a consequence of the low awareness, research investment into understanding the reef ecosystem is also low relative to comparable ecosystems. Over the past five years, the Australian Research Council has awarded more than A$55 million to coral reef research compared to only A$4 million awarded to temperate reef research.

Australia is a world leader in coral reef research, reflecting decades of investment and the recognition of the importance of coral reef systems. The economic, social and ecological importance of kelp forests in Australia justifies a similar commitment to temperate reefs.

The Great Southern Reef is relatively healthy and well managed compared to reefs elsewhere in the world. However, it is under growing pressures from climate change, population growth and urban development.

Many areas of the reef are already showing severe signs of stress and degradation. Waters of the western and southeastern reef are currently warming between 2 and 4 times faster than the global average.

Warming has caused substantial changes in species distributions on the reef. Some species ranges are shrinking, posing a serious risk of extinction.

Some species' ranges are expanding. Sea urchins and tropical fishes are decimating kelp forests in the western, eastern and southeastern reef.

Kelp forests have also been lost due to local impacts of coastal development and pollution from discharge of sewage and storm water in the east and south, or a marine heatwave in the west.

With the current 16 million people living adjacent to the southern reef set to double by 2060, additional losses of some reef habitats are inevitable.

A reef for future generations

Most of Australia’s kelp forests lie within the coastal zone under state jurisdiction. They are therefore managed independently by the five states in which they occur.

We need consistent governance, but it must be flexible enough to manage the reef across southern Australia.

For instance, if a fish ranges across different states, it would make sense to harmonise licensing, seasonal closures and bag limits. At the same time we might need local management targets, say, for nutrient runoff, to account for regional differences in sensitivity.

There may be new ways that we exploit the reef that we need to regulate, such as “bioprospecting” for seaweeds and sponges.

Ensuring that Australia’s temperate reefs continue to support and deliver valuable services into the future will require a strong knowledge-base and the public and political will to look after the system. It will need a commitment that reflects the immense ecological, social and economic benefits we derive from the Great Southern Reef.