Become a Member
Ad
Trafficking of minor girls – the second-most prevalent trafficking crime – surged 14 times over the last decade and increased 65% in 2014, according to new data released by the National Crime Records Bureau.

Girls and women are the main targets of immoral trafficking in India, making up 76% of human trafficking cases nationwide over a decade, reveal NCRB data.

Sexual exploitation of women and children for commercial purposes takes place in various forms including brothel-based prostitution, sex-tourism, and pornography.

Most of the victims (3,351) were registered under immoral trafficking.

Immoral trafficking was followed by human trafficking (2,605), under section 370 & 370A of Indian Penal Code, which includes men and boys trafficked to work sites such as brick kilns and construction sites.

Traffickers import women and girls from, Indian states aside, a variety of countries, such as Ukraine, Georgia, Kazakhstan, Uzbekistan, Azerbaijan, Chechnya and Kyrgyzstan, Nepal, Thailand, Malaysia and Thailand, according to this United Nations report.

To counter the surge targeting girls and women, a 2013 amendment to the law provides rigorous punishment from a minimum of three years in prison to life imprisonment to address the trafficking of children, including physical exploitation or any form of sexual exploitation, slavery, servitude or the forced removal of organs.

Human trafficking expands to almost every part of India

These five states are high source as well as destination areas, trafficking women and young girls to red-light areas; they comprise 70% of all reported cases of human trafficking over the past ten years. 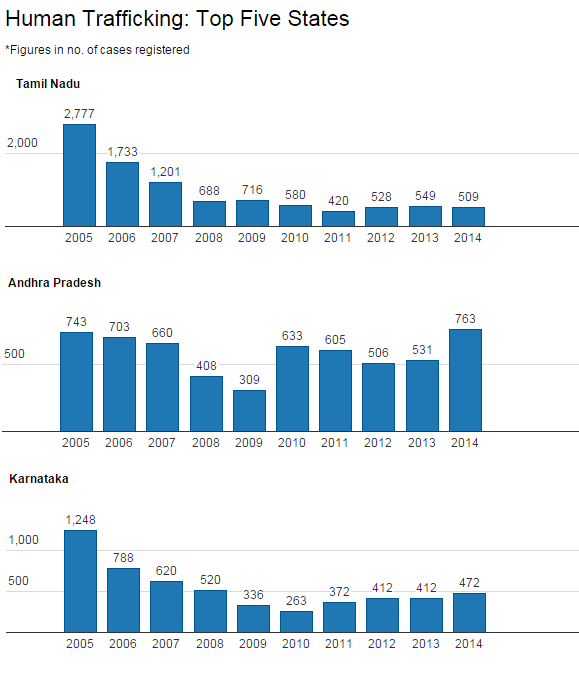 Source: National Crime Records Bureau; Note: Figures from 2005 to 2008 do not include cases reported under Child Marriage Restraint Act, 1929; Andhra Pradesh figures for 2014 are inclusive of Telangana.

However, cases in Tamil Nadu appear to be declining, while West Bengal is reporting a rise.

Tamil Nadu has reported trafficking of young women and children to the red-light areas of Mumbai and Delhi, according to this UN report on Human Trafficking. Raids by police in Tamil Nadu have also revealed the expanding operations of transnational traffickers. 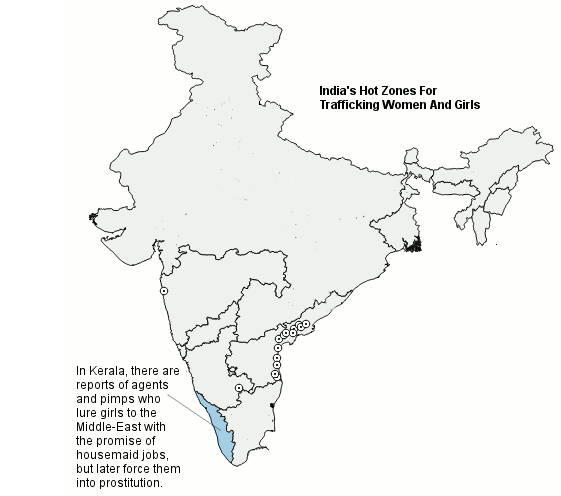 Human trafficking is not an Indian phenomenon. It is the third-largest source of profit for organised crime, after arms and drugs trafficking involving billions of dollars annually world-wide.

Human trafficking is the acquisition of people by improper means such as force, fraud or deception, with the aim of exploiting them, according to the United Nations Office on Drugs and Crime.

In 2014, India reported a surge of nearly 39% in the number of cases registered across the country for human trafficking. Human trafficking cases in India rose 92% over six years between 2009 and 2014. However, these cases declined 55% between 2005 and 2009. 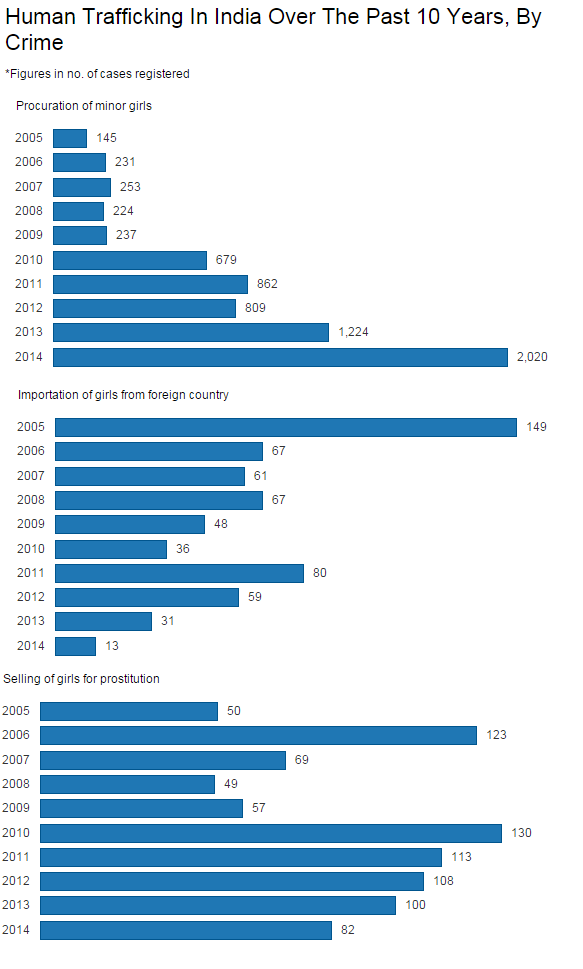 Source: National Crime Records Bureau; Note: figures from 2005 to 2008 do not include cases reported under Child Marriage Restraint Act, 1929; The IPC sections for the crimes mentioned above are as follows–Procuration of minor girls (Sec. 366-A IPC), Importation of girls from foreign country (Sec. 366-B IPC), Selling of girls for prostitution (Sec. 372 IPC), Buying of girls for prostitution (Sec. 373 IPC), Human Trafficking (Sec 370 & 370A IPC)

Human traffickers are punished, but many get away

Over the past five years, 23% of human-trafficking cases filed ended in conviction. As many as 45,375 people were arrested and 10,134 persons were convicted. Punishments range from fines to imprisonment. 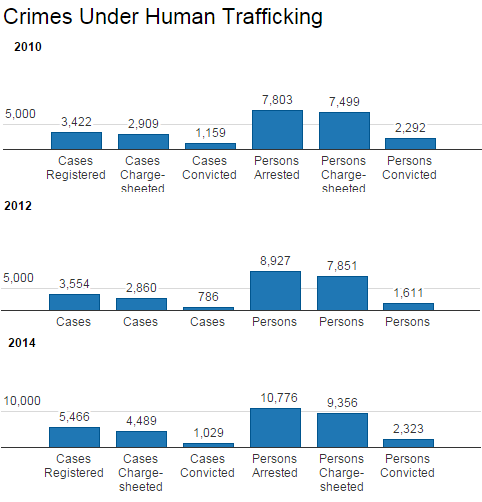 Andhra Pradesh (7,450) reported the most arrests over the past five years. Maharashtra was second, followed by Karnataka, Tamil Nadu and West Bengal.

In all, 2,756 people were convicted in Tamil Nadu, the highest among all states over the past five years, followed by, Karnataka, Andhra Pradesh, Kerala and Uttar Pradesh.

One of the reasons for an increase in the number of registered cases in 2014 over 2013 could be better reporting. The government of India is trying a variety of measures to curb human trafficking.

Government steps up efforts to keep up with traffickers

An anti-trafficking nodal cell has been set up under the Ministry of Home Affairs, in addition to Anti-Human Trafficking Units, which will be located in 335 vulnerable police districts; 225 such units are up and running.

The Home Ministry has also launched a web portal on anti-human trafficking, and the Ministry of Women and Child Development is implementing Ujjawala, a programme that focuses on rescue, rehabilitation and repatriation of victims.