Aug 28, 2015 · 04:30 pm
Victoria Anderson, The Conversation
It’s not easy being a superstar anti-establishment art celebrity. Back in the late 1990s I was one of a group of art students who, for a time, became mildly famous as art pranksters. Within the group we could never be sure – and this despite our most earnest efforts – that our work really was the stuff of revolution. But we were in the papers. We were on the Turner Prize programme. We were even offered a book deal. Nonetheless it’s hard to maintain revolutionary kudos once you’ve been interviewed by Timmy Mallett.

And so I feel for Banksy. In Bristol, his street-pieces are still powerful landmarks even if we know, and he knows, what a dichotomy he represents, caught somewhere between art and artifice; an anarchist in capitalist giftwrap.

This being so, I was not expecting much from his latest hyped-up creation, Dismaland. I assumed it would be trying too hard to recapture that lost edginess; that old sold-out soul. An art Dumbo, painting its face like a clown; an elephantine joke that isn’t funny.

And yet. And yet.

Weston-super-Mare has become a byword for every cliche ever mouthed about the British seaside. Fish-paste sandwiches. Miserable donkeys. Rain. More rain. Somewhere along the seafront, a life-size dummy of the Queen stares out from a hotel window.

The remains of a former landscape are still visible, with golden sand and spectacular sunsets that bleed all over the west-facing coast. But the town itself is challenged. It’s one of the many seaside towns run down by low employment and little investment.

And while towns such as Margate may have been substantially regenerated by an influx of middle-class urban artists, let’s be clear: nothing would doom Dismaland faster than to see it be swamped by hordes of post-ironic urbanites. 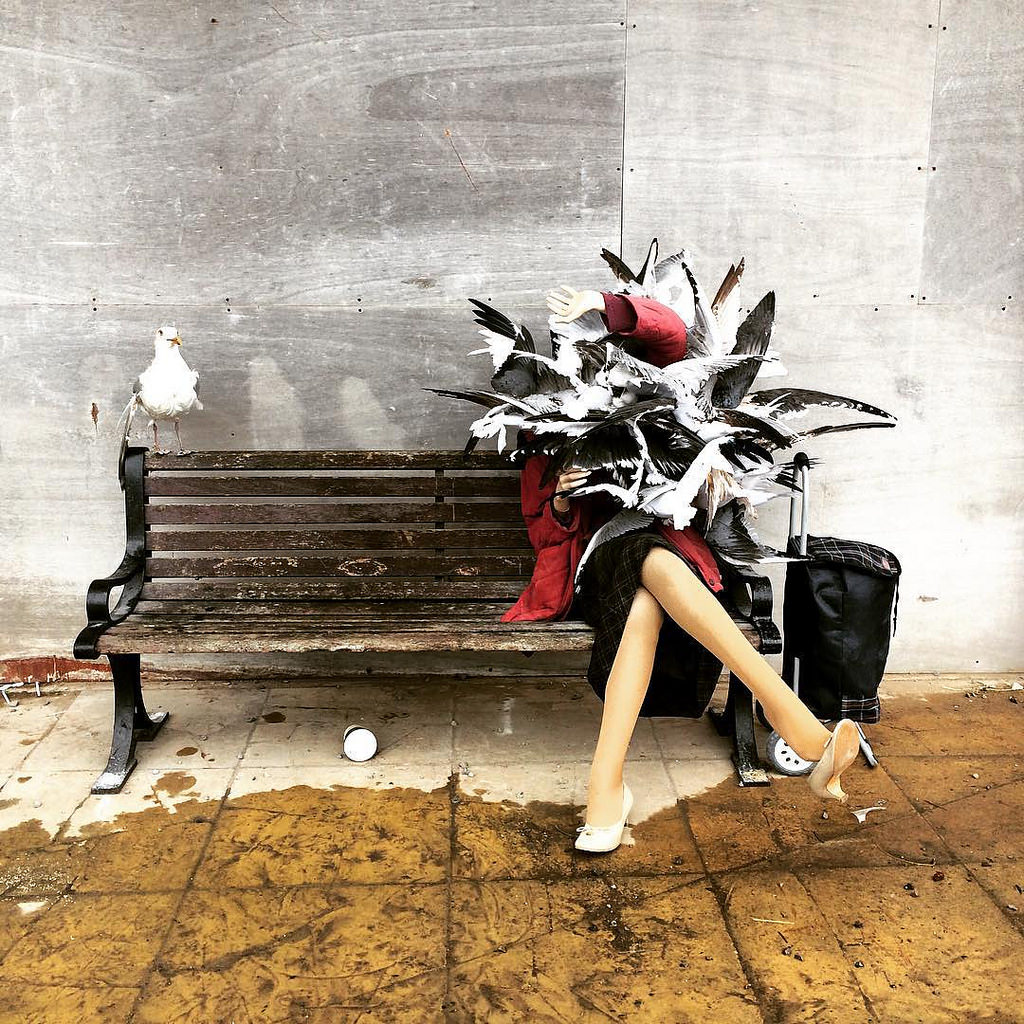 I can only hope that doesn’t happen, because my experience of Dismaland was pure magic.

It came from the children. Among rubble, crumbling brickwork and exposed cabling, children played. They were joyous on the merry-go-round, despite the decorative horse strung up by a cleaver-wielding butcher. With utmost seriousness, children steered miniature boats crammed with miniature migrants towards miniature cliffs of Dover, avoiding the miniature corpses. Somewhere a Shetland pony hung suspended in formaldehyde, a golden narwhal tusk glued to its forehead. The children stared. “Look,” said a mother, almost concealing her anxiety. “A unicorn.”

The pinnacle of it all was the fairy tale palace, modelled dismally on Disney’s core branding. In the absolute gloom, children’s voices were shrill. “I don’t like it.” “I’m scared.” “Look! The princess is really dead. Mum. Have you seen the animals? Look. She is really dead.” And so on. 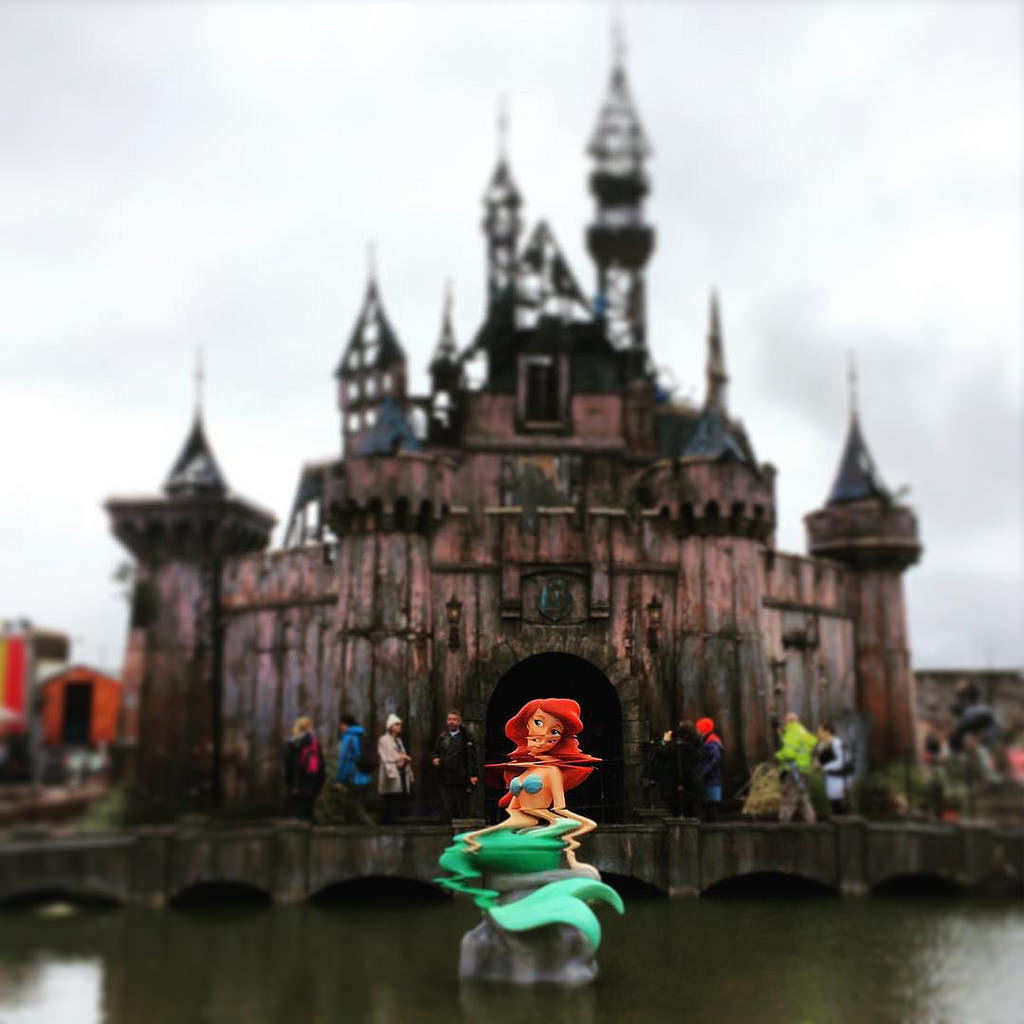 Disney, of course, has colonised the fairy tale as a medium for extreme capitalism. Banksy, in turn, has re-appropriated it as a vehicle for “entry-level anarchy”. But fairy tales themselves are intricately bound up with class relations and social power, frequently hinging on rags-to-riches and marrying “up” as the very model of success.

In 1697, Charles Perrault wrote the first collection of fairy tales for children. In 17th-century France, fairy tales had become a highly stylised literary form created for aristocratic adults; highly wrought and finely tuned for the monied classes. But Perrault’s tales were written under the guise of an old peasant woman: Mother Goose. Aping the style of the oral folk tale, his collection included what would come to be Disney staples such as Cinderella and Sleeping Beauty.

While folk tales were often morally ambiguous or downright ambivalent, stylised fairy tales were frequently intended to mould social behaviour according to the mores of the rich. Perrault himself was clear about his pedagogical intentions. Such stories were useful since they could be made to contain hidden instructions for children.

It’s no surprise, then, that Disney’s tales have played such a key role in its hyper-capitalist dominion.

But even despite landfills of princess merchandise, Disney too has dabbled in the vaguely horrifying. The death of Bambi’s mother scarred generations of children, as did the Technicolor perversities of Pinocchio’s Pleasure Island. Dumbo’s Pink Elephants are in a class of their own. Watching the children play at Dismaland I was reminded of all these things; and reminded too that there is a value, surely, in allowing children to come face-to-face with their own fears and realities; their unexpressed anxieties, dreams and nightmares; danger and loss.

There is no moral to this particular story. Except to say that, perhaps, Dismaland’s re-imagining of the Disney fairy tale is truer to its folk roots than was intended. While a fairy tale is pinned down and fixed, like a glue-tusked pony in formaldehyde, the folk tale is a living organism that changes with every telling; becoming something different depending on the who, the where and the how. Four weeks from now, perhaps Dismaland itself will be a pickled pony. But on Saturday, it was magic.