Contribute Now
Ad
We are so used to hearing about the distressed nature of India's public sector banks, which were just given (yet another) brand new government plan to revive them, we often forget about the performance of the biggest one: the Reserve Bank of India. After all, RBI too is a bank with paid-up capital, a specific mission in the markets and a responsibility to its shareholders, who just so happen to be the people of India. And, it turns out, RBI is pretty good at what it does.

Over the last few years, instead of keeping money for its own stability and contingency funds, the central bank has been giving as much as 99.9% of its profits to the Centre. And that turns out to be a sizeable amount of money. In the 2014-'15 year (RBI uses a July-June accounting calendar, and presents its accounts in Rs billion), the central bank is set to transfer a surplus of Rs 658 billion (Rs 65,800 crore) to the government of India, up from Rs 526 billion a year prior and just Rs 150.09 billion in 2011. 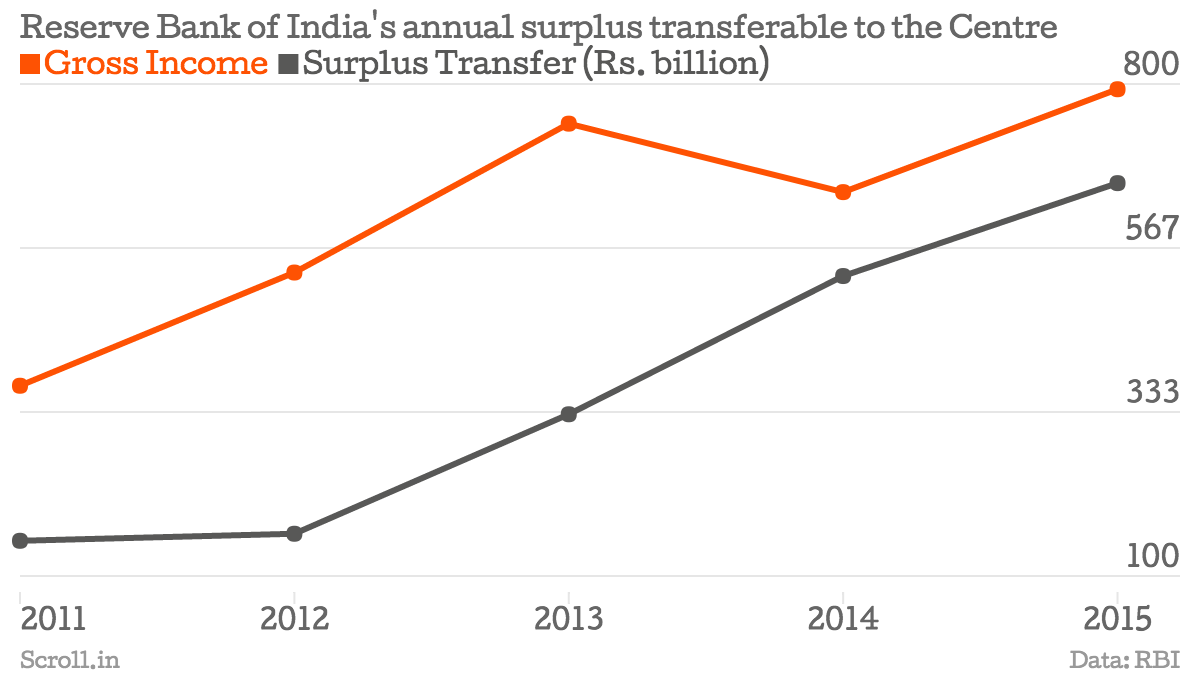 That's a sizeable enough amount of money that should help the government in its mission to keep the fiscal deficit a small as possible. Considering the deficit usually runs into several lakh crore, the infusion of an extra Rs 65,800 crore can go a long way in helping plug gaps left by revenue collections.

A panel appointed by the RBI itself last year had recommended that the central bank start to give more money back to the Centre, instead of putting the cash into its own funds. The YH Malegan panel said that both the asset development funds and the contingency reserve maintained by the bank had adequate funds. According to the Reserve Bank of India's annual accounts, released in a report on Thursday, it has maintained more than Rs 2 lakh crore in its contingency reserve and more than Rs 21,700 crore in its asset development fund, for the last few years running.

As a result, the committee recommended that the central bank transfer all of its surplus back to the government, after expenditure for three years running. And indeed, as per the bank's accounts, 99.9% of surplus for the last two years have been given back to the Centre. This explains that convergence in the surplus transferred to the government, relative to its income over the last year in the above graph.

This, however, doesn't come without consequences. Pointing out how successful the RBI has been over the last few years, in building up its balance sheet, gathering foreign exchange reserves to inoculate itself against another temper tantrum and by helping the government bridge its deficit gap, governor Raghuram Rajan has, in his latest annual report, sought leeway to pay his employees better.

In the "Governor's Overview" portion of the annual report, Rajan points out that the bank has been a very efficient organisation, bringing down its staff strength from more than 35,000 people in 1981 to 16,700 people today, even though its responsibilities have gone up. As a result, he makes a pitch for reviewing the compensation and pension plans of RBI employees.

A key factor in RBI’s success has been a satisfied staff. In the past, RBI used to have no problem attracting junior officers, losing only an occasional officer who was successful in the IAS exam. Today, we lose more than we should be comfortable with. This is why a revamp of the professional challenges we offer our staff is very much needed, and we hope the changes outlined earlier will help us become a more attractive employer. In this regard, our review of compensation, as well as the long-pending improvement in pensions for our retirees also assume importance.