Become a Member
Ad
At around 6.30 pm on Wednesday, Vishnu Colony in Ahmedabad's Bapunagar suburb erupted with sounds of running feet, indignant shouts and shattering glass panes. A few minutes later, Bhaveshbhai Patel, a watch repairman, realised that seven or eight policemen had burst into his one-storey home.

“The police had broken into the house next door and entered my house through the adjoining roofs,” said Patel, who was on the upper floor of the house at that time. “I ran to shut myself behind a door, but they broke it down and began hitting me. And then they pushed me off the edge of the first-floor balcony.”

Patel says that he fell 12 feet to the ground floor, where he claims other policemen began to hit him. He survived with a fractured foot and a head injury only because his neighbour began to throw large tins at the policemen to drive them away. 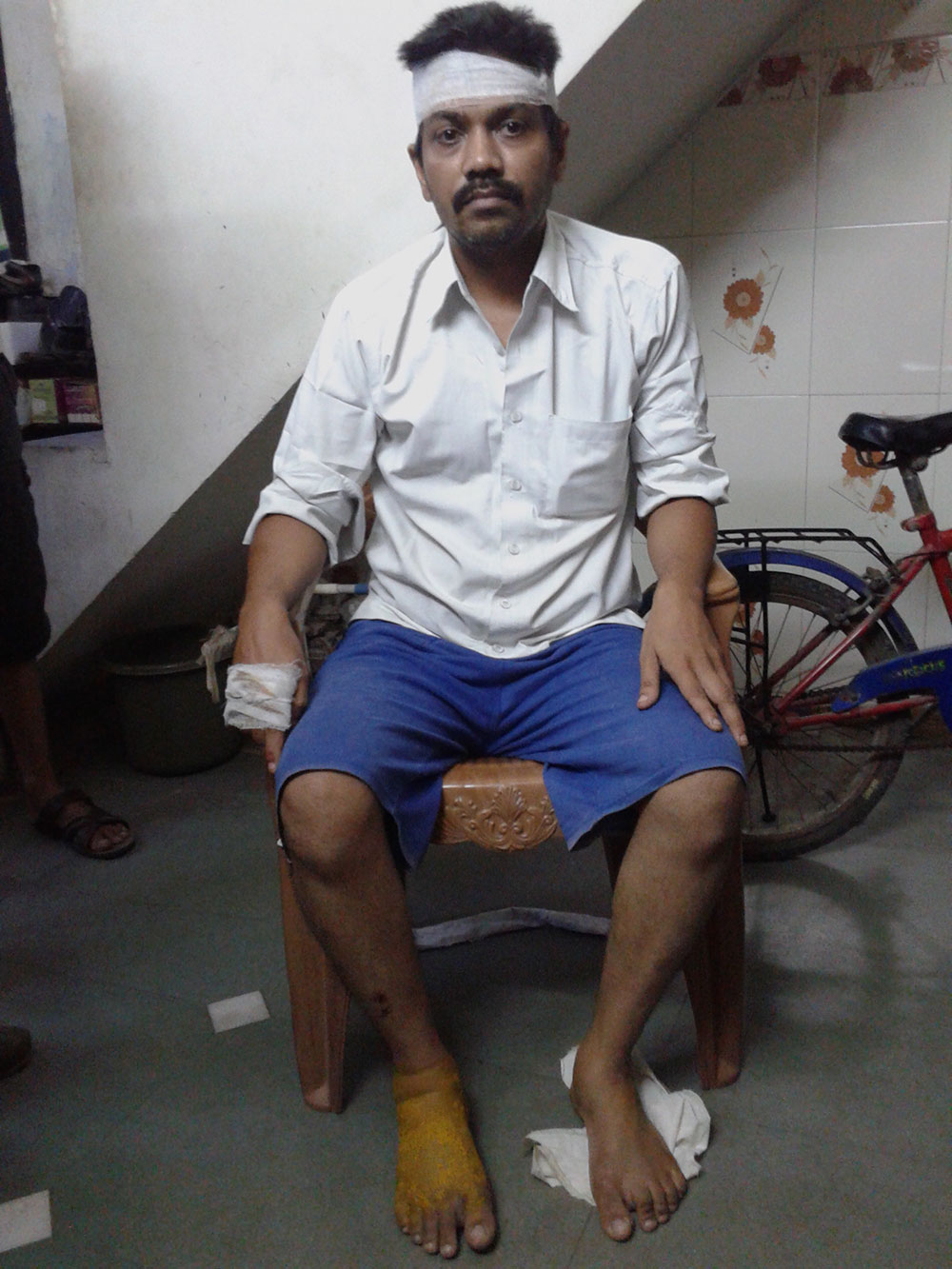 Bhavesh Patel had committed no crime, but he had a good reason to be hiding from the police on Wednesday.

It was the day after the Patel-Patidar community held a massive rally in Gujarat's biggest city to demand a share of caste-based reservations in educational institutions and government jobs. That evening, army troops had been called into Ahmedabad and other cities across Gujarat to control the intensifying stand-off between the Patel community – who are known as Patidars – and the police.

By Thursday, the third day of the protests, nine people across the state had died in violence that the police has blamed on rampaging mobs and on clashes between Patidars and other backward caste groups. But the Patels have blamed the violence squarely on the “terrorism” of the police themselves.

On Wednesday night and Thursday, the police allegedly broke into several Patel-dominated residential colonies in Ahmedabad, where they vandalised private property, used physical force against residents and made sexualised threats against women.

In many localities, police personnel have been captured on CCTV cameras damaging cars and bikes. The Gujarat High Court has now ordered an inquiry into the police violence.

As a culmination of several months of rallying across Gujarat, the Patidar Anamat Andolan Samiti,  headed by 21-year-old Hardik Patel, mobilised several lakh community members to attend a mega-rally in Ahmedabad on Tuesday. By the evening, when only a few thousand protesters remained at the venue, Hardik Patel was detained for a short while, before being allowed to go.

The mobs in the rally were angry and the police conducted a lathi-charge to control them. But PAAS members present at venue claim the lathi charge took place without warning, after the police cut off power connections to the ground, plunging it into darkness.

“I saw how the police became goondas,” said Eleshbhai Patel, a volunteer with PAAS who was at the rally. “I saw them smash bikes and cars and beat up women and children and journalists.”

Junior officials from the Ahmedabad police, who did not wish to be quoted by name, claim that due warnings were issued before the action. In either case, protesting Patidars were by then angry enough to go about the city burning public buses and police vehicles. 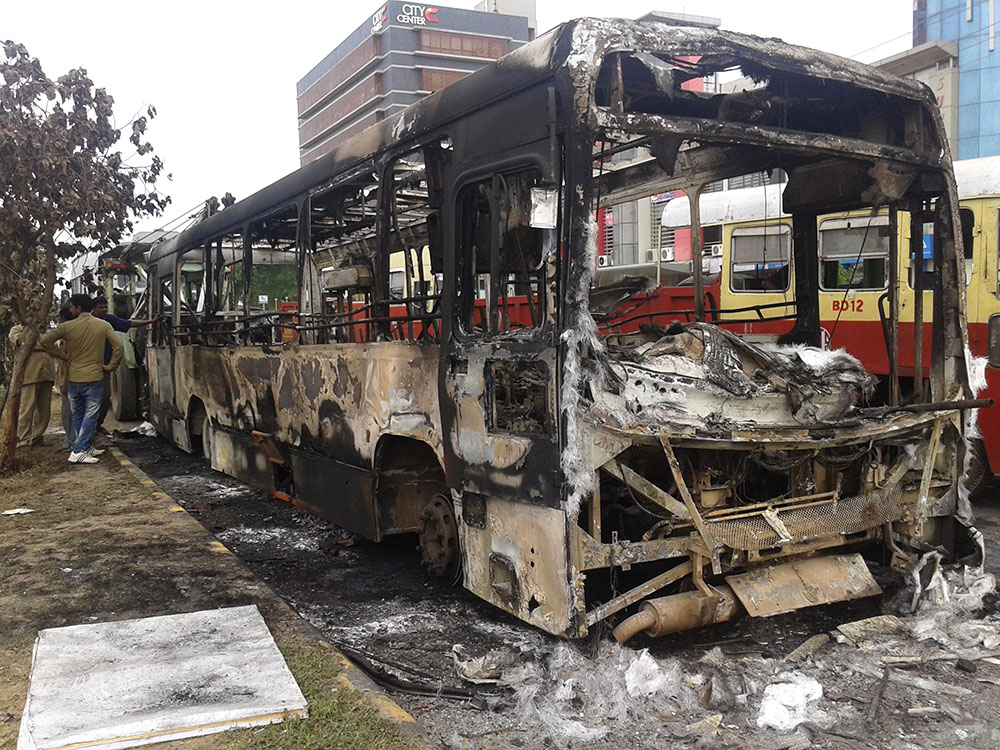 The hulk of a charred bus on the streets of Ahmedabad.

By the next day, Wednesday, things took an uglier turn. Eight people had died across Gujarat, four of them in Ahmedabad. In some cases, the rioting was allegedly between the Patidars and other OBC groups, who fear that their access to jobs and education will be hurt if reservations are extended to the Patels. But as CCTV footage and eye-witness testimonials from Patidar housing colonies indicate, the police also played a big part in the violence that has half-paralysed Ahmedabad.

Situated on the outer edge of Ahmedabad, Bapunagar-Hirawadi is a 10-km stretch of middle and lower-middle class residential colonies that are dominated by the Patidar community. The area, say locals, has always been peaceful and unassuming, but with the events of the past three days, the sight of a police van is enough to send residents scampering for cover. Here, every colony has a story to tell.

In Matrushakti Society, a middle-class housing colony with 150 homes, residents spent all of Thursday organising tours to show visiting journalists the damage caused by the police. Almost every car parked in the central lane of the colony had shattered windshields and panes, a few houses had broken windows and at the end of the trail was the home of Shwetang Patel, a 30-year-old embroidery machine designer who allegedly died in police custody on Wednesday morning.

“Look, Shwetang's father suffers from paralysis and he can neither talk nor cry,” said Bhupendra Rayani, a neighbour who went on to recount the youth's story in his own home. “He was the only earning member of the family, and on Tuesday night, he was returning home from work. He had no idea that the police had already broken into the colony and were vandalising it.” 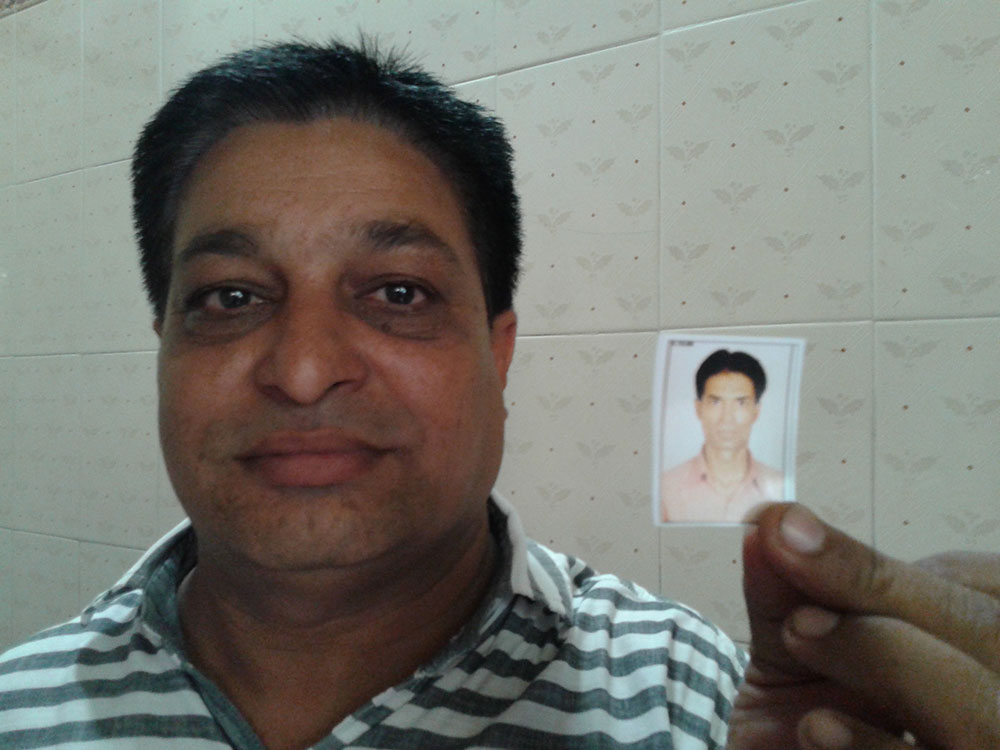 Bhupendra Rayani shows a photo of his neighbour Shwetang Patel, whom he claims was killed by the police.

As Shwetang Patel entered the gate of Matrushakti, he was allegedly caught, beaten and carried off to Bapunagar police station along with five other residents of the colony. Four of them have now been released, but the fifth man – Ashwin Patel – has been missing ever since they were picked up.

“The police practically kidnapped us and didn't allow us to speak,” said Sawan Patel, 17, one of the five Matrushakti residents who was caught with Shwetang Patel and allegedly held all of Tuesday night without an official complaint being registered. “Shwetang was beaten the most and in the morning, he was taken to a hospital.”

At around 1.30 pm on Wednesday, Shwetang Patel's mother received a call asking her to pick her son up from the local police station. There, claims Bhupendra Rayani, she was coerced into signing a blank paper and then taken to the hospital. “By then, he was already dead,” said Rayani. “In the evening, they conducted a post mortem without the family's consent, and gave us a report claiming it was a natural death.”

So far, Shwetang Patel's family has refused to take his body back from the hospital. Based on their appeal, the Gujarat High Court has ordered another post mortem and many Matrushakti residents hope that the policemen allegedly responsible for his death will be suspended at the very least. But among many other residents, the growing anger against the police is palpable.

“Suspension of these police officers would not be enough,” said Poonam Pachani, another of Shwetang Patel's neighbours. “In such cases, the Gulf and Saudi have the best laws – no FIR or trial, just kill the murderers in public on the spot.”

A larger trail of violence

Down the road from Matrushakti, the stories keep pouring out. Bhavik Vamja, a computer science student from Amreli district, displayed bruises caused by the police inside his Patidar community hostel in Bapunagar. “On the afternoon of August 26, the police broke into the hostel gates and smashed bikes and windows,” he said. “We have proof on CCTV cameras. When the police came, seven of us ran to hide in our rooms, but we were beaten anyway.” 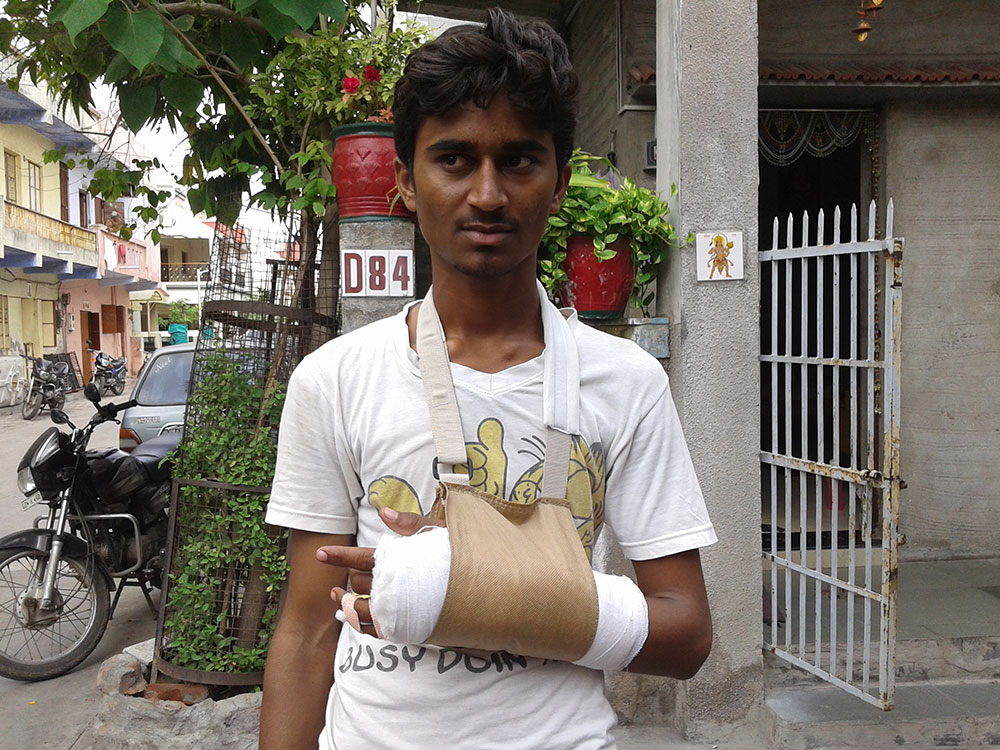 Outside India Colony, Vinod Kumar Patel pointed to a small Hindu temple that the police had allegedly destroyed. “The broke the entire marble canopy and even hit the idol,” said Patel. “Why would they do that to a temple? It's true – the police behaved like terrorists and terrorists have no religion.” 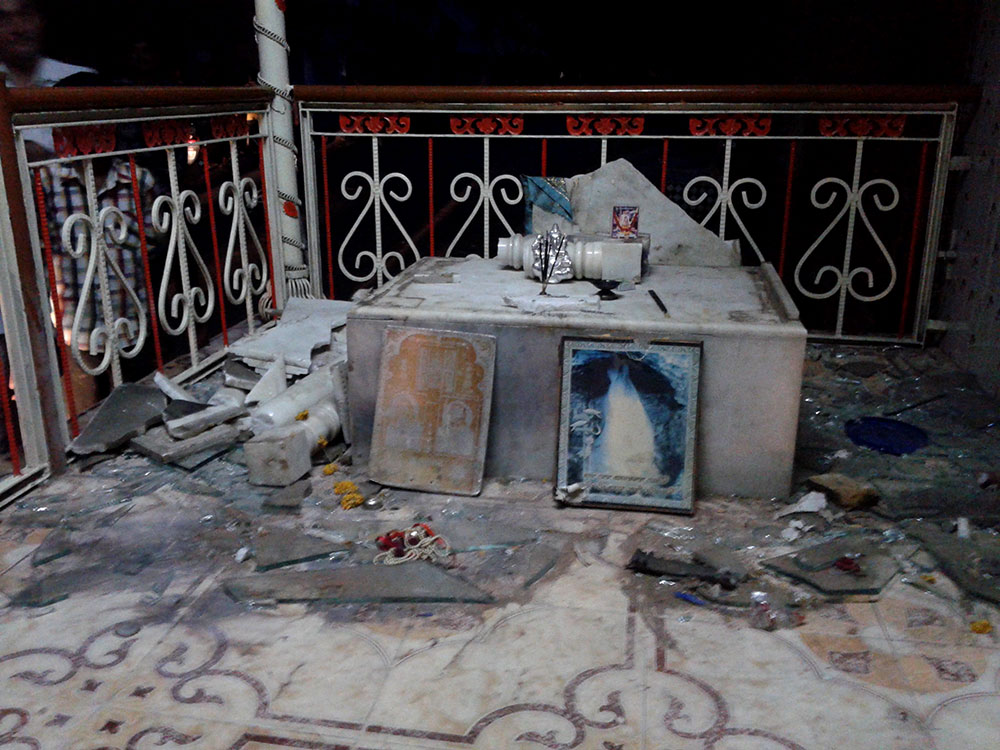 Locals claim that the police damaged this shrine outside Ahmedabad's India Colony.

In the tenements of Vishnu colony, one OBC home was attacked along with four Patel homes, and everyone in the neighbourhood swore that the perpetrators – who came in broad daylight on Wednesday afternoon – were policemen and policewomen.

A running theme alongside the damaged vehicles was the police's reported use of sexualised threats. Every single family Scroll.in spoke to in all the Bapunagar colonies claimed they heard the same refrain from the police as they attacked their homes, cars and bikes.

“They kept saying, 'you want reservation? Send your mothers and sisters out to us, we'll show you reservation',” said Hansaben Patel, 55, a resident of India Colony still traumatised by the way in which police personnel allegedly banged on the door of her first-floor house at 1.30 am on Wednesday. “They had already smashed the tubelights in the garage so no one could see what they were doing to our cars.” 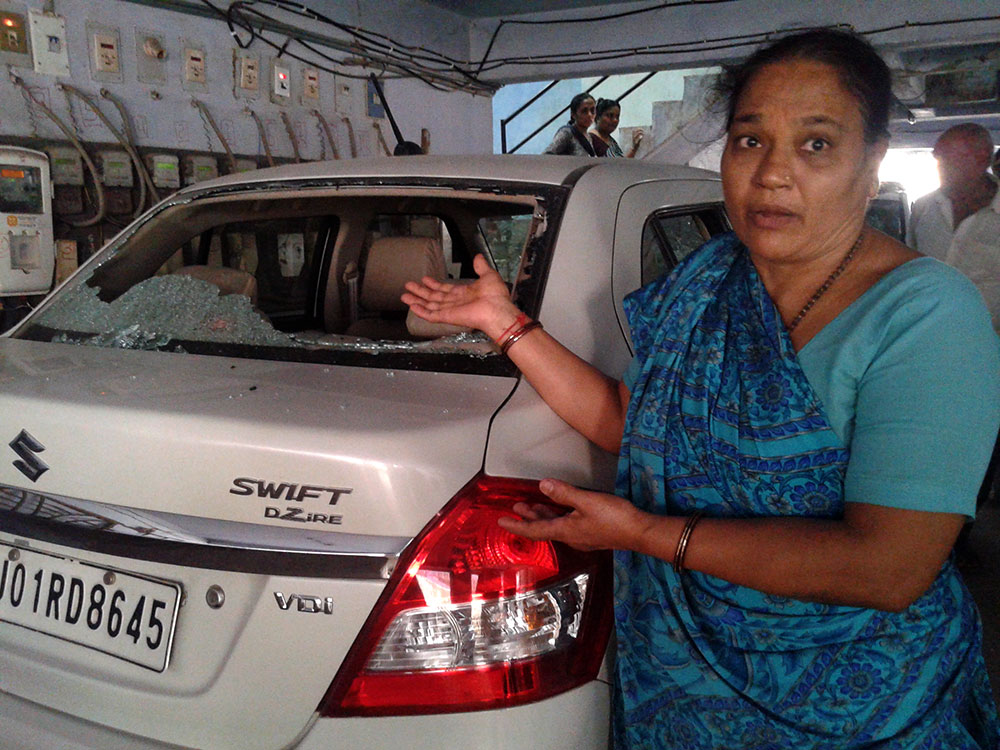 The women of Vishnu Colony alleged that they had it worst: despite the presence of policewomen, they claim they were physically abused by male police personnel.

“When they broke into my house, the gents police caught me by the neck and threw me down and hit me with a lathi on my back,” said Swatiben Patel, a Vishnu Colony resident.

Her neighbour, Rashmika Patel, claims she was slapped by a male officer in front of her young children. “They asked me where my husband was, and when I said he wasn't around, they slapped me,” said Rashmika. “They behaved as if everyone must have a man in the house.”

Asmita Radariya, another neighbour, had her phone taken away from her by the police. “I was taking a video of RAF [Rapid Action Force] personel telling the police to hit the women and men, but not the children,” she said. “But they took my phone away.”

What the police say

When Scroll.in visited Bapunagar police station, police inspector Pravin Parmar was out with several teams of police and army personnel to enforce another day of curfew in the area. Despite several efforts to reach him later, he was not available.

Another officer, who did not wish to be named, completely denied that the police were involved in any of incidents. “The Patidars have destroyed their own vehicles,” he said, while declining to discuss CCTV footage or explain the sequence of events since the lathi charge during Hardik Patel's rally.

Residents of Bapunagar, however, are now chalking out plans to take their cases directly to the city's police commissioner or state human rights commission.

“The police has been targeting us because they have OBCs in their ranks who don't want us to get reservations,” said Mahesh Patel, a diamond traders from India Colony. He believes that some of the vandalism of public buses by Patidars, which continued on Wednesday, was inevitable. “The police was meant to protect us,” he said. “If they themselves behave like terrorists, what can we do?”

A month after getting complaint of sexual abuse against priests, Kerala church yet to meet woman