Become a Member
Ad
The scourge of phone calls on India’s mobile networks getting cut mid-conversation has become so bad that Prime Minister Narendra Modi himself has expressed concern about it. Observing that call drops affect the common man, Modi asked the telecom ministry to address the issue urgently. After all, the prime minister will find it tough to sell his vision of Digital India with high speed digital highways and cyber security innovation if we can’t get a basic phone call right. But call drops are not going away any time soon.

First, there is the question of whose court the ball is in. Telecom Minister Ravi Shankar Prasad has said that the government has done its part and will continue to do what it can to enable mobile service improvement. Telecom companies say that the shortage of telecom towers and of spectrum, coupled with fears of radiation and an over-zealous radiation emission cap on towers is hampering their efficiency.

In an audit of telecom companies performance for the quarter ended March 2015, the Telecom Regulatory Authority of India found that 23 of 184 2G operators overshot a cut-off rate for call drops. The regulator’s benchmark for call drops is less than or equal to 3%. Three networks had a rate that exceeded 2%. According to the TRAI audit, Aircel is one of the worst performers having call drops of more than 3% in 16 service areas with the rate as high as 18% in the North East. In comparison,  BSNL had more than 3% call drops in five circles and Vodafone and MTS in one circle each.

What really is a dropped call?

The audit numbers, as bad as they are, may still be and underestimation of the number of dropped calls. The reason is that what telecom operators report as a dropped call is very different from what a customer understands as a dropped call, said Kartik Raja, founder and managing director of Phimetrics Technologies.

“When I can’t hear you and the line just goes mute, but my phone shows that the call is still on, from a network point of view it is not a call drop. For the network, only when they receive a message saying the call is dropped, it is counted as a call drop,” Raja said.

Phimetrics conducted a study of telecom voice services, which began by defining a dropped call from a customer’s point of view rather than use a telecom company’s definition. The criterion was to count a call as dropped if the two users can’t hear each other for more than 10 seconds. Suddenly, Raja found, dropped call rates of 2% and 3% looked more like 5% and 15%. That’s how dire the problem is.

India's telecom operators have the lowest access to spectrum in the world. In addition to that, spectrum in India is extremely fragmented, which constrains use of data. “If you want to move from 2G to 3G or 4G mobile broadband, you need to have a 5Mhz chunk of spectrum. It won’t work if you have five chunks of 1Mhz each,” explained Mahesh Uppal, director of telecom consultancy firm Com First. “Some of the bands of spectrum are extremely fragmented, especially 1800 Mhz that is need for 4G.” 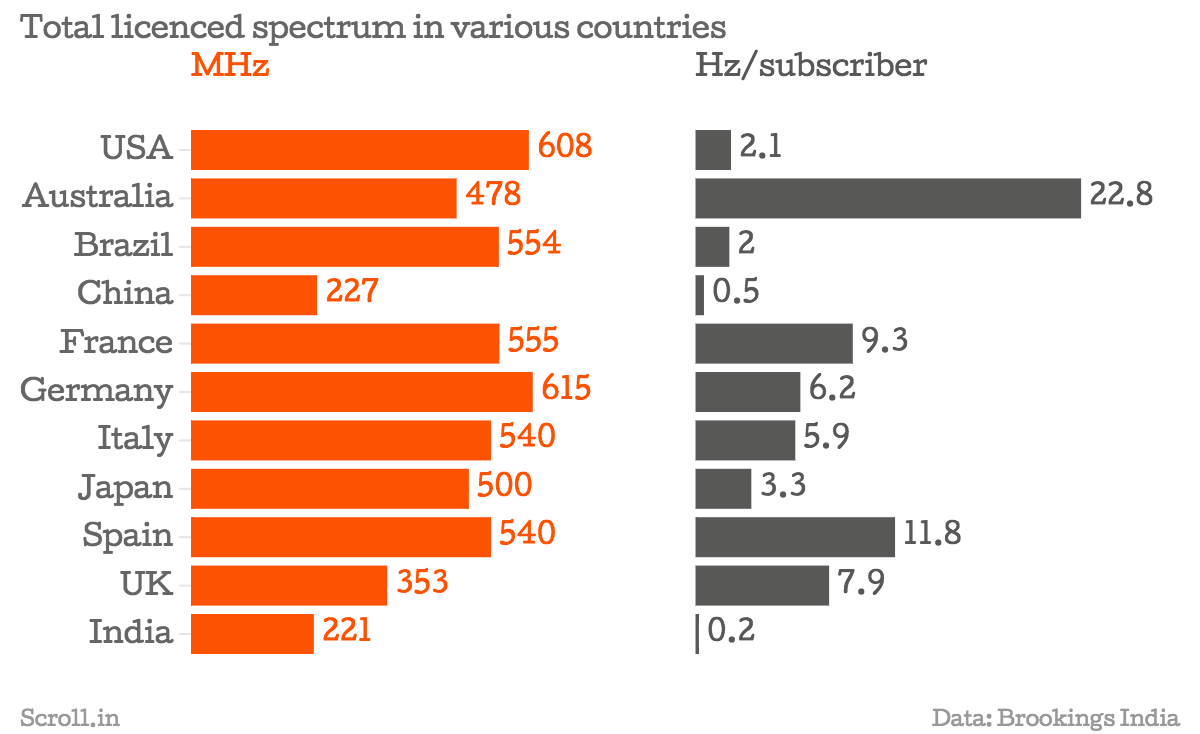 Telecom operators are packing base transmission stations – what we call telecom towers - into populous urban areas, all drawing from the small chunks of spectrum available there. But India doesn’t have nearly enough towers for current mobile usage or future growth. At present there are about 4,25,000 towers across the country. Hemant Joshi, telecom analyst and partner Deloitte, Haskins and Sells, estimates that for our current use and growth we need at least 1.00,000 more. Uppal thinks the requirement is closer to 2,00,000.

Several telecom tower sites have even been lost to the bogey of radiation. In 2012, the government reduced the electronic frequency limits of radiation to one-tenth of the existing limits. “This has created a sudden situation where the capacity has reduced and the traffic is increasing,” said Joshi. “You have networks on which voice [usage] is growing modestly and the data [usage] is going through the roof.”

The reduced radiation limit, which is also one-tenth of the level that the World Health Organisation thinks is permissible, was criticised by the organisation’s own environment coordinator.

While the main culprits seem to be the spectrum and tower shortage, they aren’t the only reasons for dropped calls. The Phimetrics study shows that 36% of call drops occurred in areas with good network and one-third of call failures occurred in off peak hours. “Operators are making a lot of revenue from data now. So a lot of spectrum is being allotted to 3G rather than 2G, to data rather than voice. That’s primarily the reason this sudden increase in call drops has happened,” Raja said.

The telecom regulator is willing to reassess the measurement of call drops and has called for new consultations into the issue. The telecom ministry, meanwhile, is considering financial disincentives for call drops. It isn't easy to pin down the reason for call drops, said Uppal, and if the government levies penalties service providers are likely to contest that they alone are responsible for call drops possibly leading to protracted litigation.  “Penalties will be counterproductive, in my opinion. They will help no one, not even the government,” he said.