Contribute Now
Ad
Crimes against women have more than doubled over the past ten years, according to latest data released by the National Crime Records Bureau.

The semantic meaning of “crime against women” is direct or indirect physical or mental cruelty to women. Crimes directed specifically against women and in which only women are victims are characterised as “crimes against women”. 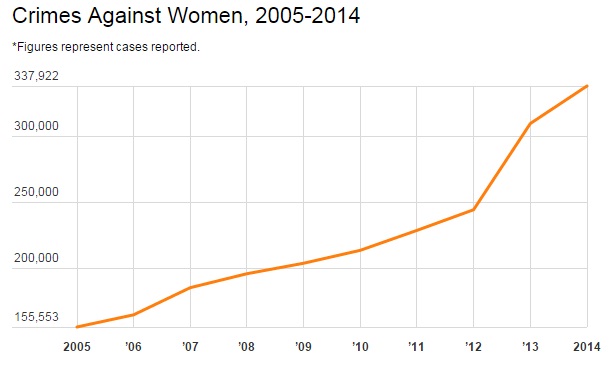 Cruelty by husbands and relatives under section 498‐A of Indian Penal Code is the major crime committed against women across the country, with 909,713 cases reported over the last 10 years, or 10 every hour. 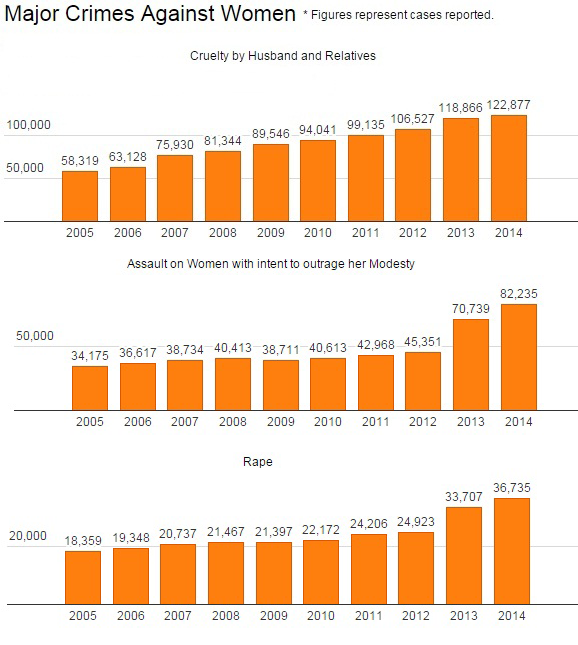 Assault on women with intent to outrage her modesty (470,556), earlier classified as molestation under section 354 of IPC, is the second-most-reported crime against women over the last decade.

More than 66,000 cases have been reported under the Dowry Prohibition Act, 1961, over the last decade.

Ten cases of cruelty by husband and relatives are reported every hour across the country followed by cases of assault on women with intent to outrage her modesty (5), kidnapping & abduction (3) and rape (3).

NCRB added three more heads under which cases of crime against women have been reported in 2014.

As many as 66% of women reported experiencing sexual harassment between two and five times during the past year, a 2010 study  in New Delhi had found.

Andhra Pradesh has reported the most crimes against women (263,839) over the past 10 years. 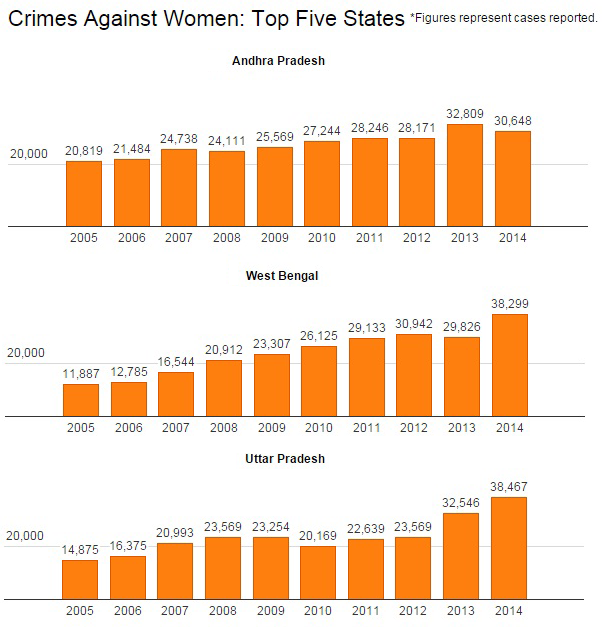 These five states account for almost half of all the crimes committed against women across the country over the last decade.

Kidnapping of women up three times

Police investigations have found that in places like Delhi, Agra, Madhya Pradesh and Rajasthan, denotified tribes (also known as criminal tribes), such as Bedia, Nat, Kanjar and Banjara, are involved in kidnapping minor girls, according to a report by the United Nations.

These tribes raise kidnapped girls as their own daughters, and then send them to Mumbai and Middle East to work in dance bars, brothels and escort services.

Madhya Pradesh (70,020) also reported the most cases of assault on women with intent to outrage her modesty.

Around 35% of women globally have experienced either physical or sexual intimate partner violence or non-partner sexual violence, according to a 2013 global review by UN Women.

Some national violence studies show that up to 70% of women have experienced physical or sexual violence in their lifetime from an intimate partner, the UN report said.