To be exact, the 59-year-old portly and bespectacled millionaire sold 255 million litres of his Officer’s Choice whiskey last year, according to a report by UK-based The Spirits Business. That was enough to unseat Smirnoff as the world’s largest spirits brand by volume. The Diageo-owned vodka brand sold some 230 million litres.

To find his way to the top of the global alcohol industry, it has taken Chhabria nearly three decades and hundreds of legal battles.

The rise of Officer’s Choice mirrors Chhabria’s own travails. Launched in 1988, the mass-market whiskey languished as Chhabria negotiated his business through a series of splits and mergers. Only in the last 10 years has the whiskey brand dramatically rebounded, with new variants, fancier packaging and a far-reaching distribution network.

The officer and no gentlemen

The story of Officer’s Choice begins in 1985, and has all the elements of a Bollywood potboiler: sibling rivalry, betrayal, legal wrangling and murky corporate battles.

In 1984, Manu Chhabria, a Dubai-based businessman and Kishore’s elder brother, was one of the world’s largest importers of Sony Electronics. His company Jumbo Electronics was based out of the UAE, with Kishore handling the firm’s London operations.

Soon, Manu was keen on expanding his business empire in India. One acquisition followed another, cutting across industries including leather, tyre, infrastructure and pharmaceuticals.

Meanwhile, in 1985, London’s RG Shaw & Co. was looking to sell its 38.4% share in Shaw Wallace & Company, a Kolkata-headquartered liquor company with a 99-year-old history. The company owned labels such as Royal Challenge, Director’s Special and a few beer brands, including Haywards 5000.

Manu moved swiftly to acquire a majority stake in the company but was eventually locked up in a takeover battle with the then management of Shaw Wallace, led by chairman SD Acharya, for almost two years.

The deal was also delayed because India’s government suspected a clandestine agreement between Manu and Vijay Mallya, the then flamboyant 30-year-old chairman of the United Breweries Group, to take control of the company. India’s enforcement directorate was concerned that Mallya may have used Manu – a foreign national – as a frontman to acquire the stake.

By 1987, even as the case remained in court, the Chhabria brothers took control of Shaw Wallace. It was their first tryst with the alcohol industry.

By the turn of the decade, the Chhabria brothers were slowly falling apart. “I didn’t own a single share in Manu’s business empire and was working as a salaried employee, earning only Rs 7,500 per month (there was a salary cap of Rs 10,000 per month in the pre-liberalisation days),” Kishore said in an interview last year. “This, naturally, made me insecure about my future and that of my family. I would often ask Manu to do something to secure my family’s future.”

The inevitable split got underway in 1992.

Kishore wanted to separate and keep BDA Breweries and Distilleries, a subsidiary of Shaw Wallace. BDA was acquired by Shaw Wallace in 1988 and was later developed as an arm to promote its lower rung of liquor brands. BDA launched Officer’s Choice the same year.

“After much persuasion and effort, he gave me BDA, which was a small, semi-defunct company in the early 1990s,” Kishore said in 2014. “It was a dot in front of SWC (Shaw Wallace) and initially I was reluctant. I told him that giving me BDA was like giving a child a lollipop to stop him from crying but finally gave in.”

The hawkish Kishore also struck up a partnership with Mallya in 1992.

Mallya offered the younger Chhabria, Kishore, a 26% stake in Herbertsons, a company that owned popular whiskey brands such as Bagpiper. Mallya owned 30% stake in the company.

But that friendship wasn’t to be. Mallya and Kishore were soon at loggerheads, with each accusing the other of slyly raising their stake in Herbertsons.

This is how Kishore described his fall out with Mallya:

“An enemy’s enemy is my friend… That’s why I joined hands with Vijay (Mallya)—for protection. I had a written agreement with Manu giving me ownership and control of BDA. So, I took BDA into the Mallya group in return for a 26% stake in Herbertsons.”

“The deal was that we would each hold 26% in the company and jointly run Herbertsons. Mallya gave me a very handsome salary package, a Mercedes and the title of vice-chairman, but he had no intentions of sharing control and gave me no responsibilities.”

“Soon, we had disagreements over how to run the company. Around this time, I received information that Mallya had started buying Herbertsons shares from the open market. I, too, started increasing my stake. I finally ended up with 51% in the company and was in a position to take control.”

Another round of out-of-court settlements followed. Under the deal, agreed in 2005, Kishore would exit Herbertsons, while Mallya would return BDA Distilleries. Kishore also received Rs 130 crore as part of the settlement. The same year, Mallya merged Herbertsons and seven other spirits firms to form United Spirits.

By then, Manu had passed away and bequeathed his wealth to his wife. Mallya – then at the top of his game – made an attempt at buying Shaw Wallace. He finally succeeded in 2005 when Manu’s family invited bids for selling their stake.

But he wasn’t done with Kishore yet. Mallya claimed that BDA also belonged to him, since the company was part of the Shaw Wallace portfolio and filed multiple cases again.

“The end of litigation in 2005 was the real breakthrough, when Mallya and I settled out of court,” Kishore said in an interview in May this year. “With this the lull phase of the brand, too, ended. And the journey, from a brand that sells five million cases a year to becoming the largest selling whisky, began.”

Kishore decided to hire Deepak Roy, once Mallya’s blue-eyed boy, who left the UB Group in 2005. The new CEO of Allied Blenders and Distillers – as BDA was renamed in 2007 – Roy had also spent a decade working with Diageo in the 1990s. Together, Kishore and Roy decided to rebuild the company’s image among India’s burgeoning middle class and spent aggressively on marketing and packaging.

“We were the fourth or the fifth largest whiskey maker back then,” Roy told Quartz in a telephone interview. “But Officer’s Choice had a name many associated with. In India, the name Officer’s always strikes a chord with the middle class. It was about aspiration. We decided we should capitalise on that.”

ABD conjured up a new marketing campaign, along with the introduction of newer brands and fresh packaging. Work also began on creating a more robust distribution network. When the company realised that its old bottle wasn’t quite working for tipplers, who were slowly graduating to branded whiskey, it introduced new packaging.

Officer’s Choice also kept its pricing very low. “In an industry that is often under pressure due to high taxes, we had to also keep pricing under check,” Roy said. As is the norm in the alcohol industry, Officer’s Choice reviewed its pricing every year. “But we also ensured that we did not price ourselves more than our competitors,” Roy said. 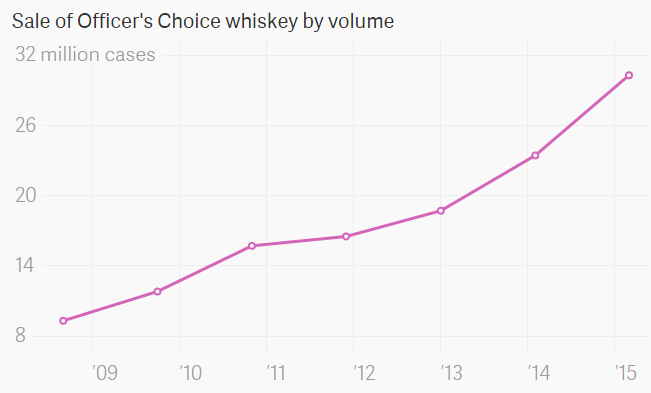 “Allied Blenders is quite popular in the rural parts of the country,” Manjunath Reddy, a research analyst at Euromonitor International, said. “The company targeted rural consumers with small pack sizes and economy or mid-priced products.”

Finally, the results started to show by 2011 when Officer’s Choice overtook Bagpiper, a brand then owned by United Spirits. 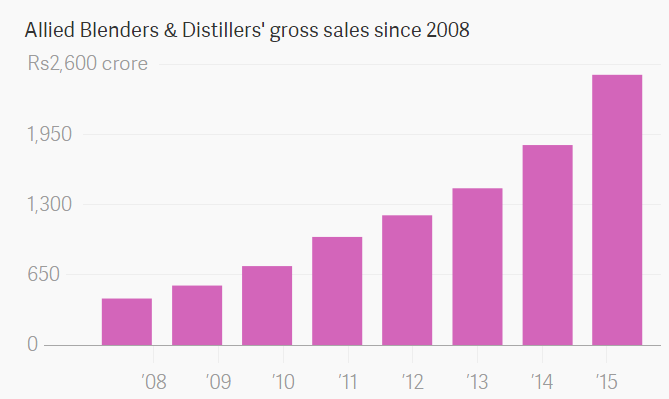 Today, ABD has 49 bottling units – at least one in each Indian state – and a distribution network that’s been significantly ramped up in the last few years. Roy said that the improvement in distribution was one of the most crucial factors in scaling up Officer’s Choice’s growth.

“Their ingredient of success has been to focus on one brand,” Alastair Smith, director at London-based market research firm IWSR, told Quartz. “The company has a good name and good packaging and is at a premium to the mainstream brands. They also have a very experienced management team and ownership.”

In the next year and a half, Kishore wants to take ABD public, Roy told Quartz. ABD plans to raise between Rs 750 crore and Rs 1,000 crore through an initial public offering, which it intends on using for acquisitions – both in India and abroad – and expanding its domestic bottling operations.

Today, Kishore isn’t actively involved in the day-to-day running of the company. His arch-rival Mallya is almost bankrupt, while Diageo has gained control of his company, United Spirits.