Become a Member
Ad
The Taj Mahal’s century-old chandelier that sustained damage during a recent cleaning procedure, was one of the two gifted by then Viceroy, Lord Curzon in the early 20th century. The chandelier made of copper, placed under one of the royal gates, just where it allows visitors a first glimpse of the Taj, was installed in 1909. Weighing around 60kg, it was crafted at the Mayo School of Art in Lahore.

The Archaeological Survey of India, on its part has decided to remove a smaller bronze lamp, inlaid with gold and silver, hanging in the inner dome over the false mausoleums of Shah Jahan and Mumtaz Mahal.  Also a gift from the Viceroy, and more intricate in its construction, Curzon is said to have invested more time and resources on it.

Curzon, who became India’s Viceroy in 1899, was a man on several missions. To secure India’s northern frontiers from the advancing threat of Russia, Curzon encouraged Francis Younghusband’s 1903 Tibet expedition. His move to preserve India’s heritage was part of his own "civilising mission".

But it was the Taj Mahal that had his unqualified attention. In the last two centuries, the Taj Mahal had seen much destruction, looted by different marauding groups as the Mughal Empire lay dying. It had also suffered damage during the 1857 revolt.

Previous conservation initiatives had focused on the mausoleum but Curzon’s plans  included the restoration of the mausoleum’s gardens and the reconstruction of its outer courts.

In the space of eight years, 1900-1908, the Taj Mahal’s southeast garden tower and the colonnades of the jilaukhana (the forecourt) were rebuilt. The minor tombs and the complex of the Khawasspuras (quarters of the tomb attendants) were restored and the bazaar approaches to the complex were cleared.

Curzon even concerned himself with the outfits of the tomb’s hereditary attendants (khadims) who were made to wear what Curzon and his advisers thought was quite the traditional Mughal garb, something that none other than Akbar had worn – white suits with green scarf and a badge. 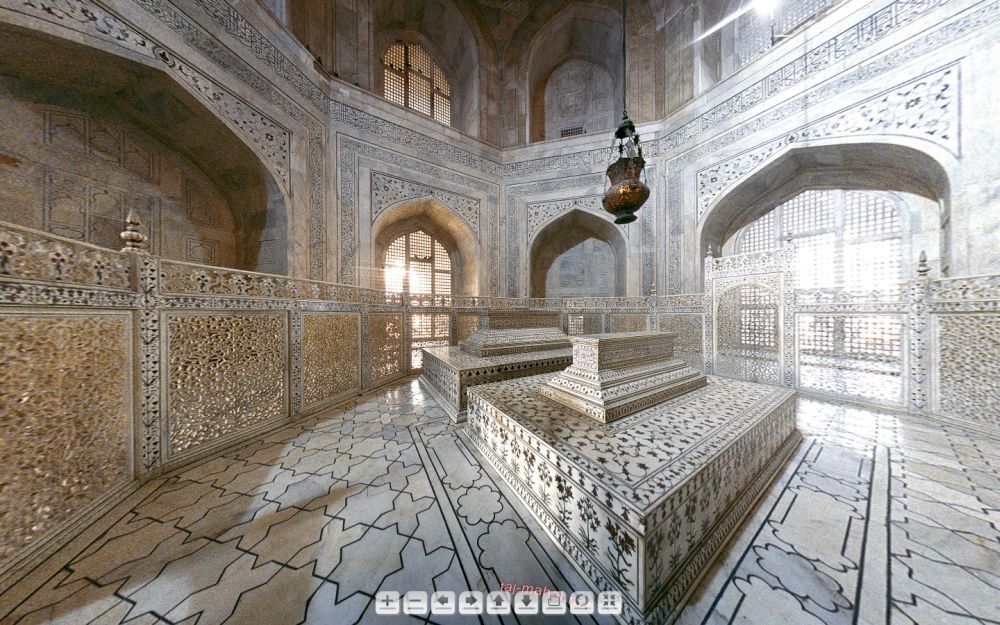 Curzon wrote that he spent some £40,000-50,000 on Agra alone (his own and the government’s resources). But one of Curzon’s special concerns – after being horror-struck by the dim smoky lamps the attendants used when showing him around – were the new lamps that he wanted set up – these would be objets d’art that would eminently suit the interior of the Taj Mahal and the royal gate.

For the lamp to hang from the Taj’s inner dome, he envisaged something similar to those seen in the mausoleums of Egypt’s Mamluk sultans (13th to the early 16th century). First he turned to Lord Cromer, British Consul General in Egypt but these plans soon fell through.

Curzon then tried to get a copy of the Arabian Nights, that he had read in childhood (evidently Curzon’s efforts were part of similar moves, towards creating an imagined Islamic past or how an Islamic city was envisioned).

As his biographer, the Earl of Ronaldshay writes, Curzon while in Cairo, on his way to London in 1904, finally decided to have the lamp cast in likeness of one that had once hung from Sultan Baibars II’s (ruled 1308-1309) mosque. This lamp however had vanished and could not be traced to any museum in Cairo, London or Paris.

But local artisans apparently knew how the lamp looked, down to its every detail. And advised by two Egyptian scholars, Herz Bey, the director of the Arab Museum of Cairo, and E Richmond, of the Egyptian Public Works Department, a trusted artiste, Todros Badir, was chosen to replicate the lamp with the dedication and delicacy this required.

Badir took two years to make a vase-shaped lamp in bronze, inlaid with gold and silver work.  Curzon’s dedication in Persian – Presented to the Tomb of Mumtaz Mahal by Lord Curzon, Viceroy 1906 – was also inscribed on it, after a careful process of revision to ensure it matched the script used by calligraphers for the Taj Mahal.

This lamp was installed on February 16, 1908, after a solemn function following the evening prayers, almost a year before the other chandelier at the gate was.

"The central dome of the Taj is rising like some vast exhalation in the air," Curzon is supposed to have said at the inauguration. "If I had never done anything else in India, I have written my name here and the letters are a living joy."