Contribute Now
Ad
Gujarat may have emerged, in a recent report, as the best state to do business, but it is Maharashtra that receives the most foreign direct investment, followed by the National Capital Region of Delhi, Tamil Nadu (and Pondicherry) and Karnataka.

Gujarat ($12 billion) is fifth in receiving FDI. It is, however, the only state that features on both lists. 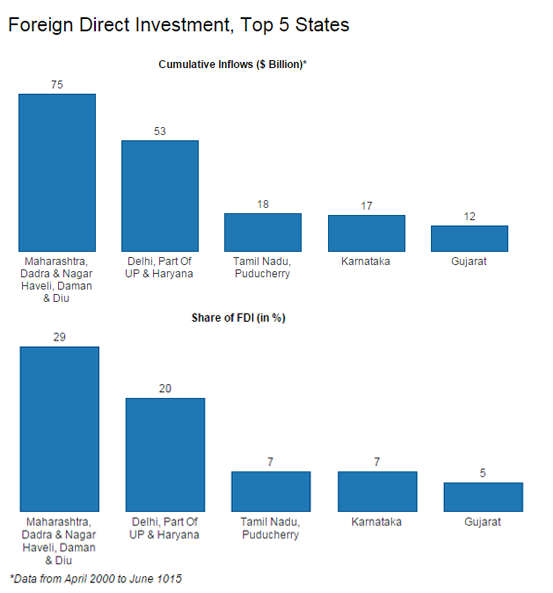 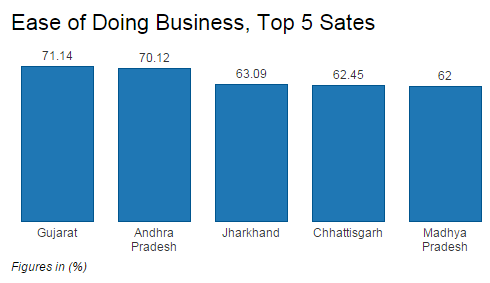 Delhi (including parts of UP and Haryana, likely those that fall within the NCR) accounts for one-fifth (20%) of the total FDI, next only to Maharashtra (including union territories like Dadra & Nagar Haveli and Daman & Diu) with 29% of total FDI, based on cumulative inflows (April 2000 – Jun 2015), according to the June 2015 report of the Department of Industrial Policy and Promotion.

Maharashtra is ranked eighth in the ease-of-doing-business ranking. The state, however, leads in obtaining approvals for infrastructure-related utilities and enforcing contracts related to dispute resolution.

Gujarat was ranked first regarding ease of doing business, according to the Assessment of State Implementation of Business Reforms by the Department of Industrial Policy and Promotion, based on a study conducted by World Bank and KPMG.

The assessment took stock of reforms implemented by states between January 1 and June 30, 2015, and is based on the 98-point action plan for business reforms agreed between DIPP and state/union territory governments, a government release said.

Andhra Pradesh (70.12%) is ranked second in ease of doing business, followed by Jharkhand (63.09%), Chhattisgarh (62.45%) and Madhya Pradesh (62%). These four states do not rank among the top five in terms of total FDI inflows into the country.

Maharashtra (including union territories like Dadra & Nagar Haveli and Daman & Diu) received $75 billion in FDI over the last 15 years.

Delhi (including part of Uttar Pradesh and Haryana) has received ($53 billion) followed by Tamil Nadu ($18 billion).

The assessment report has also highlighted the reason for the government to come out with the report: India ranks 142nd out of 189 economies in the World Bank’s Doing Business 2015 report and the second-worst-performing economy in South Asia. The World Economic Forum’s Global Competitiveness Report ranks India as 71 out of 144 economies.

India is ranked 93rd on irregular payments and bribes, 59th on burden of government regulation and 57th on efficiency of the legal framework in settling disputes.

Similarly, corruption is said to be one of the major constraints for doing business in India ahead of factors like electricity, access to finance and land, according to the World Bank’s Enterprise Survey.

Despite progress under Nitish Kumar, Bihar is still at the bottom rungs of India’s poverty ladder