Sep 21, 2015 · 07:30 pm
Devanik Saha, IndiaSpend.com
India’s public-health system needs urgent attention and investment – especially in the rural areas, reveals an IndiaSpend analysis. There is an 83% shortage of specialist medical professionals in community health centres, according to the Rural Health Statistics 2015 released by the Ministry of Health & Family Welfare.

The CHCs constitute the secondary level of health care and provide specialist care to patients referred from Primary Health Centres, four of which feed into each CHC, serving roughly 80,000 people in tribal, hill or desert areas and 120,000 on the plains.
An ideal CHC is a 30-bed hospital providing specialist care in medicine, obstetrics and gynaecology, surgery, paediatrics, dental and ayurveda, yoga and naturopathy, unani, siddha and homoeopathy, according to the Indian Public Health Standards prescribed by the Ministry of Health & Family Welfare in 2012.

In the 2015 Union Budget, the government cut India’s healthcare budget by 15%, a widely criticised move. The government recently announced it would raise the budget for healthcare, sanitation and child development programmes and sought parliamentary approval, according to a Reuters report. 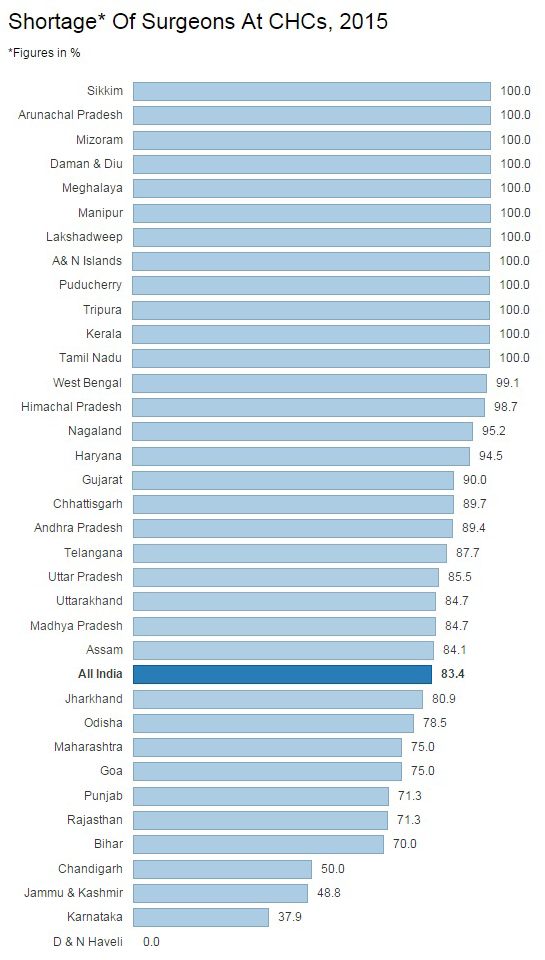 There is an 83% shortage of surgeons in CHCs across India. Arunachal Pradesh, Kerala, Manipur, Meghalaya and Tamil Nadu are some of the states that have no surgeons in their CHCs. 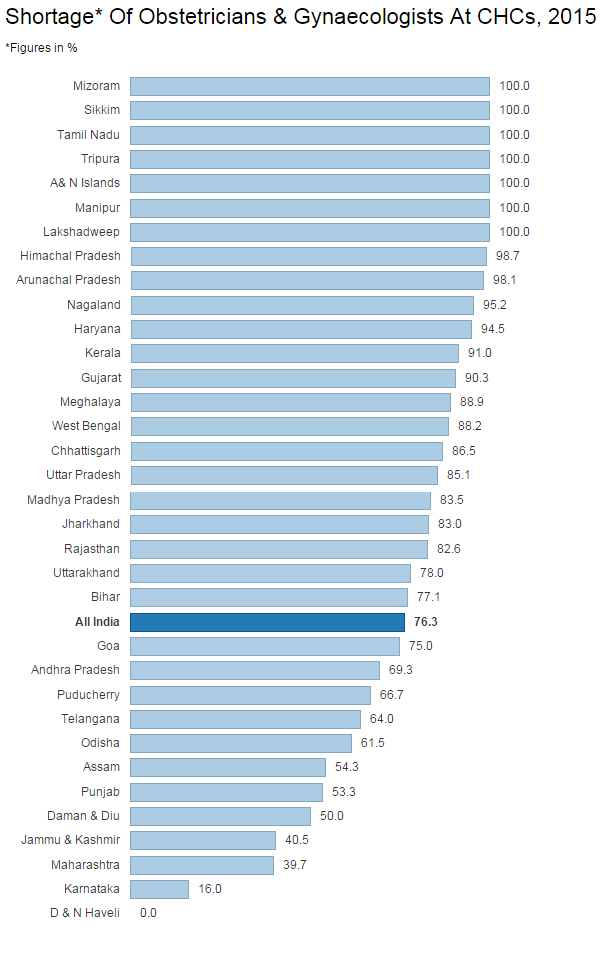 There is a 76% shortage of obstetricians and gynaecologists in CHCs nationwide. India bears the world’s greatest burden of maternal, newborn and child deaths, according to the World Health Organization.

IndiaSpend has reported how India’s healthcare spending remains the lowest among BRICS countries. 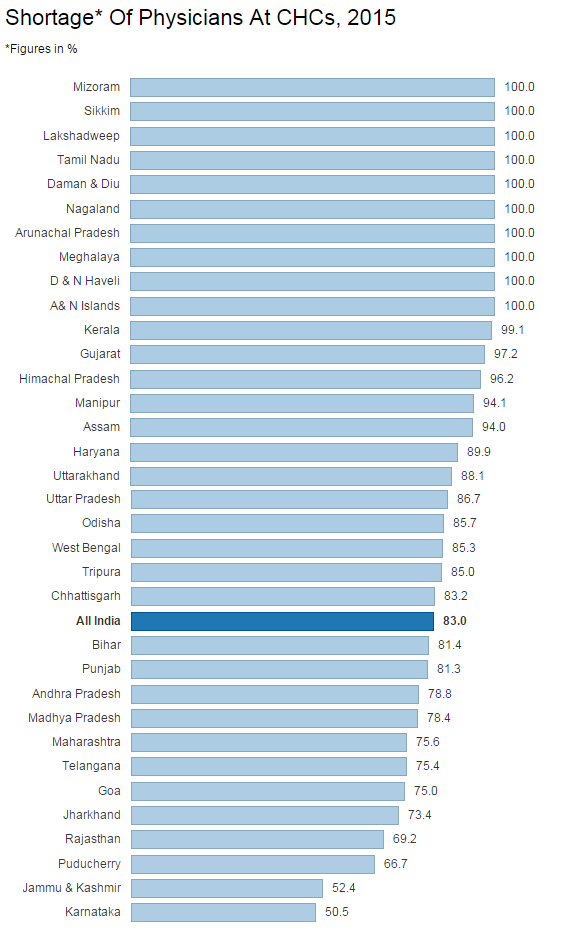 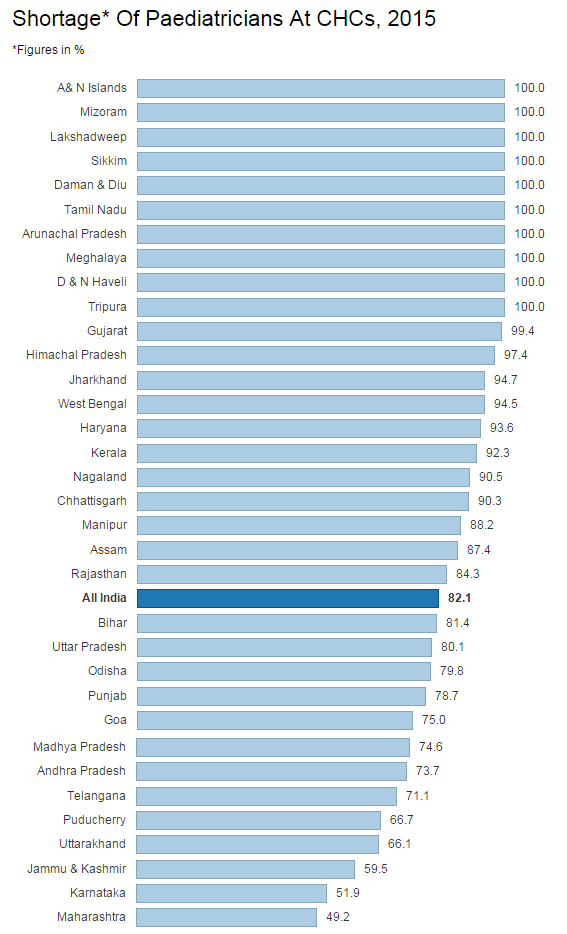 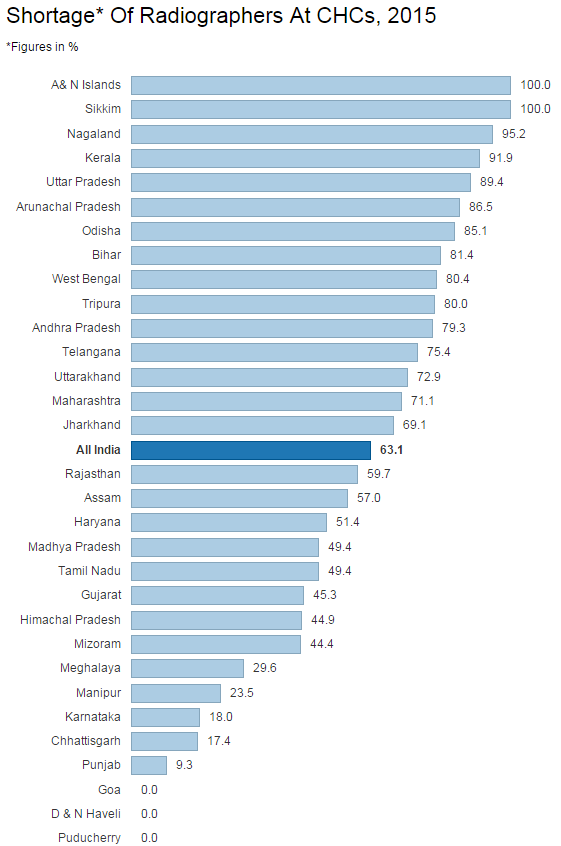 Such statistics mean that specialised healthcare treatment in rural India is difficult, which has driven rising numbers of people to costlier private healthcare.

In rural India, 58% of hospitalised treatment was carried out in private hospitals, while in urban India the figure was 68%, according to the Key Indicators of Social Consumption on Health 2014 survey carried out by National Sample Survey Office.

For non-hospitalised treatment, 72% of health needs in rural areas were treated by the private sector (including private doctors, nursing homes and private hospitals and charitable institutions), the survey said.