Contribute Now
Ad
Look at this photo of freedom fighter Netaji Subhash Chandra Bose. Then look at the image on the right of the elderly person with a white flowing beard.  This second image has been featured in at least several mainstream media outlets in recent months, claiming that it is a likeness of Gumnami Baba, a sadhu who died in Faizabad in September 1985. It has been used to emphasise the claim that the sadhu was actually Bose living under an assumed identity.  There's no doubt that the two pictures bear a startling resemblance to each other ‒ and that's because they are, in fact, images of the same man.

This visual purporting to be of Gumnami Baba, which appeared in a Times of India article earlier this month and was displayed at a ceremony in Faizabad last week to mark the sadhu’s death, is actually a computer-generated extrapolation of what Bose would have looked like had he grown old and sported a beard.

It was created in 2001 by an illustrator named Siddharth Ghosh who was working for the website of the Hindustan Times. Ghosh told Scroll.in, “It was prepared as part of the package on Gumnami Baba which had been commissioned by the organisation.” He added, “It is a computer-generated sketch developed by using the photograph of Netaji as the base.”

Shali Ittaman, who was the special projects editor of hindustantimes.com in 2001 and who had commissioned the Gumnami Baba story, confirmed Ghosh’s account of events. “This is an artistic impression based on an old photograph of Netaji Subhas Chandra Bose,” Ittaman said. “It is misleading to present it as a sketch of Gumnami Baba.”

Ever since the freedom fighter is reported to have died in a plane crash in Taiwan in 1945, conspiracies have flourished. Some people believe that he actually survived the crash and took on the guise of a sadhu.

Two years after the sketch went up on the web, hindustantimes.com removed it, for reasons no one could quite establish. “It happened sometime in 2003 and was purely a management decision,” said Ghosh, who now works as a freelancer.

Despite this, Ghosh’s illustration has appeared twice in The Times of India this month, both times with captions stating that the image was that of Gumnami Baba. In an article on September 7, the paper carried the illustration with an article headlined, “Netaji, The Saint?” In an attempt to highlight the resemblance between the freedom fighter and the sadhu, the paper juxtaposed the illustration with a photograph of Bose ‒ the very same one that Ghosh had used as the basis of his digital extrapolation.

The illustration made a second appearance in the paper on September 11, in an article under the headline, “Siberian survivor to secret sadhu…Netaji mystery lives on.”

It isn’t just some sections of the media that have been using Ghosh’s illustration. A similar sketch, slightly modified and fitted into a frame, adorns the living room of Ram Bhawan, the home of Bharatiya Janata Party leader Shakti Singh. Gumnami Baba is said to have spent the last two years of his life – from mid-1983 till his death in 1985 – in a secluded part of Ram Bhawan.

This modified version of Ghosh’s illustration also figured prominently on a banner displayed above Gumnami Baba’s samadhi near Guptar Ghat on the Saryu river in the cantonment area of Faizabad on September 16. On that day, a crowd of 30-35 people participated in a prayer meeting organised by the Subhash Chandra Bose Rashtriya Vichar Kendra – an organisation floated by Shakti Singh – to mark the 30th death anniversary of the mysterious figure. 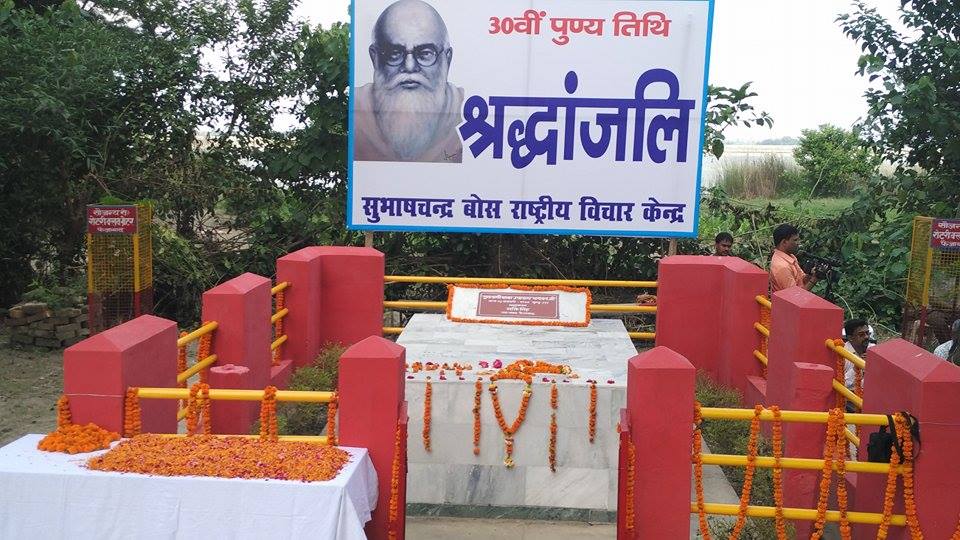 The samadhi of Gumnami Baba.

Shakti Singh had this to say at first about how the illustration was created: “Gumnami Baba followed a very strict policy on meeting visitors. But I had seen children playing around the room in which he lived. So after his death, I hired an artist and asked the children to describe how Gumnami Baba looked like. The sketch that the artist prepared on the basis of the children’s descriptions was almost similar to Netaji as he appeared in photographs.”

He could not recall the name of the artist he had hired. On being questioned again, he said the illustration was enhanced some time later by a local art studio, named Ellora Art Gallery. “Sometime in 1990, I got the sketch developed by Ellora Art Gallery,” Singh said. “The one you see with me was prepared by this gallery, which used the original sketch of the artist I had hired after Gumnami Baba’s death.”

Ellora Art Gallery, located in the Niyawan area on Faizabad’s Cantonment Road, is a small shop packed with beautiful sketches and paintings.  Ram Chandra “Ellora”, the artist who runs this gallery, acknowledged that he had developed the sketch brought to him by Shakti Singh, but denied having done that in 1990. He said that he did it this year – "around four months ago”, he told Scroll.in.

Ram Chandra then displayed a book that had featured the illustration prepared by Siddharth Ghosh. “It was this sketch that I modified and developed,” he said. The book that Ellora referred to was produced by Shakti Singh’s Subhash Chandra Bose Rashtriya Vichar Kendra and is titled, Bhagwanji se Netaji tak (From Bhagwanji ‒ as Gumnami Baba was also known ‒ to Netaji.)

The book does not specify the year of its publication, though it carries several congratulatory messages bearing the dates 2006 and 2007. One of them, by former Rashtriya Swayam Sevak Sangh chief KC Sudarshan, is dated June 27, 2007. So the book was unlikely to have been published before 2007.

Like the banner that was displayed above the Samadhi of the Faizabad sadhu, the book fails to mention that the illustration was originally prepared by Ghosh.

This is the second article in a three-part investigation into the Gumnami Baba myth. You can read the other parts here.