Contribute Subscribe
Ad
The highlight of Narendra Modi’s recent trip to the United States was his visit to Silicon Valley, where he played the role of the representative of a digital superpower to perfection. In fact, even in his politics, Modi is seen to be an expert in using technology, using social media and holograms to power his popularity.

How then did Modi’s government make the controversial decision to appoint self-proclaimed ethical hacker Ankit Fadia as the brand ambassador of its flagship e-governance programme, Digital India?

The process was confused from the start. On Monday, Ankit Fadia posted on Facebook that he had been appointed a “brand Ambassadors to Prime Minister Narendra Modi's Digital India initiative”. Given his reputation, the claim immediately raised doubts.

Sure enough, the Centre’s Ministry of Communications and Information Technology issued a statement on Tuesday morning, clarifying that no brand ambassadors have been appointed.

No such move to appoint a brand ambassador as reported: Government on reports that Ankit Fadia appointed as ambassador for Digital India

But then, only hours later, the clarification was revoked, leaving everyone baffled.

Clarity came on Tuesday evening, as the Ministry of Communications & Information Technology confirmed that Ankit Fadia (“author & ethical hacker”) had indeed been appointed the brand ambassador of Digital India.

Ankit Fadia made his name as a computer whiz-kid in the 2000s. In many ways, he was a symbol of post-liberalisation India – a super smart ‘90s kid who had made it big using middle-class India’s gold mine: information technology. Fadia is the author of 16 books on hacking and technology, travels the country giving lectures to impressionable young college students and has even stared in his own MTV show.

Which is all very good – other than the small problem that some of his claims seem to have been enhanced.

Whispers that Fadia had exaggerated his record had done the rounds for some time, till an article by Charles Assisi in Forbes  openly questioned his record. It directly contradicted some of his claims, such as the Fadia’s assertion that he had hacked the website of a popular Indian technology magazine called Chip in 1997. In Fadia’s version, consumed by guilt, he wrote to the editor of Chip and made a clean breast of his hack. So impressed was this editor, that rather than coming down on Fadia, he offered him a job with Chip when he turned 18.

When Assisi heard this tale, he got a bit of a shock since, as it so happened, he had been the editor of Chip when this Indian IT version of George Washington’s cherry tree fable was supposed to have taken place – and he hadn’t done anything of the sort. Assisi said that Chip’s website had never been hacked.

More amazement was to follow: Fadia claimed to have been contacted at the age of 15 by American intelligence agencies to decode an email from Al Qaida. He was unable to produce any proof to show that this had happened but journalists ran his version of the story, without so much as a check.

Security Charlatan of the Year 'award'

Other hackers seemed to take Fadia's claims rather personally. As a result, they have hacked Fadia’s own website many times. His claims even led to a minor India-Pakistan fracas, as a Pakistani hacker group, “Anti India Crew” hacked a government website and pasted on it text belittling Fadia and his claims of being a hacker.

More humiliation was to be heaped on Fadia yet. In 2012, DEF CON, one of the world's largest annual hacker conventions, held every year in Las Vegas mocked Fadia with the Security Charlatan of the Year “award”. 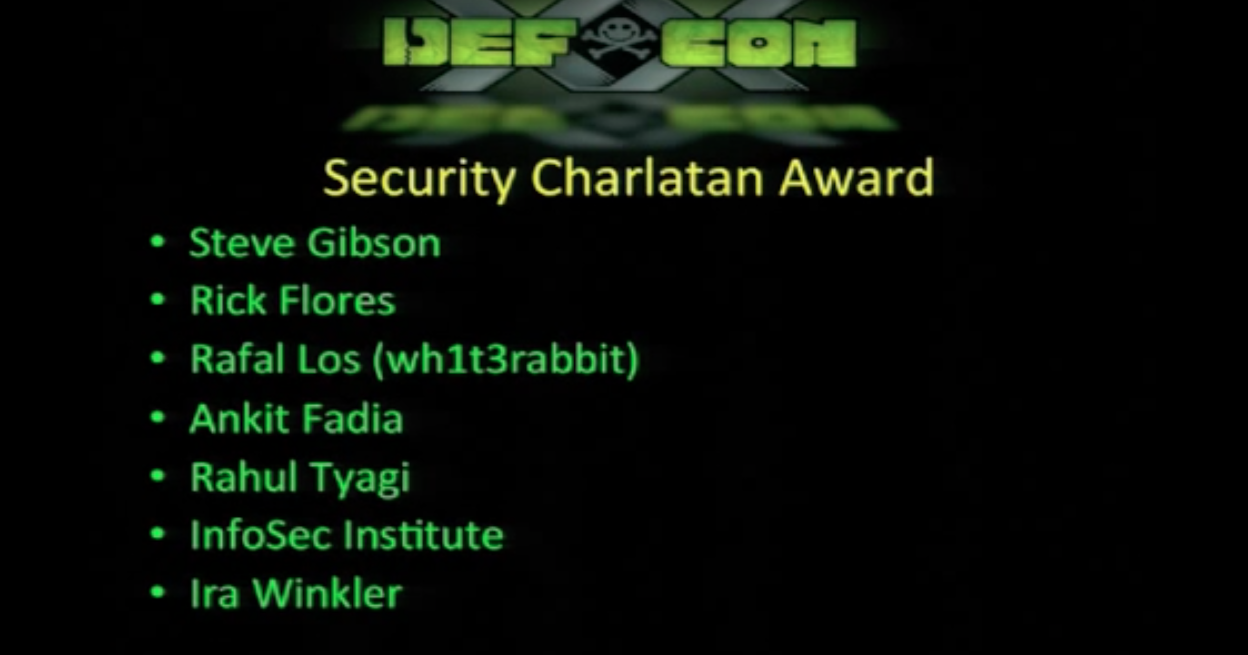 The popular information-security related website, attrition.org goes also uses the world charlatan to describe Fadia. This is what it says:

Of course, all this is the past now. It really doesn’t matter that Fadia didn’t crack Al Qaida’s emails. At the end of the day, with the talents he has, he has managed to persuade the government of India of his credibility. And that, in itself, marks him out as a man of rare talent.