Contribute Now
Ad
Tek Chand Pandit was the oldest among the men sitting under the banyan tree at Dausod’s village square in the late afternoon sun. Dressed in a white kurta pyjama, a gamcha tied around his head, the 50-year-old farmer was walking home to the other end of the village when he stopped to get some rest and to catch up on the conversation.

Meandering from subject to subject, the talk turned to the new toilets in the village. Tek Chand too had got a toilet and a bath constructed on the roof of his house last month.

Dausod in Alwar district is one of the 237 panchayats in Rajasthan the central government declared as “ODF”, or free from open defecation, in July. When Prime Minister Narendra Modi launched Swachh Bharat Abhiyan on October 2 last year, one of the project’s stated aims was to eliminate open defection by 2019. To measure the progress towards this goal, the government maintains a list of places which have turned “ODF” or open defecation-free, implying that the area’s entire population has access to toilets and is using them regularly instead of defecating in the open.

Rajasthan has been described as the leader of this sanitation revolution. Recently, 70% panchayats in large districts like Bikaner and Churu were declared open defecation-free. On the ground, though, the achievement is mixed. More households than ever have built toilets – but not all these families are using the facilities.

In Dausod, Tek Chand Pandit said he got the new toilet and bathroom built from remittances from his son who lives in Haryana. He said he preferred to defecate in the open a kilometre and a half away from his house.

“I have to walk 1.5 kilometres to be able to feel motion,” smiled Tek Chand, his hand on his belly.

“Why don’t you try walking 750 metres away and then 750 metres towards your house?” quipped Vikram Singh, a retired army man, prompting mirth among the younger men at the village square.

“Baba, do you at least cover it with mud after you are done?”

What qualifies a village as ODF?

Dausod’s villagers have been building toilets under various government programmes for over a decade. The administration first provided government-sponsored latrines here under the central government’s Total Sanitation Campaign in 1999. Years later, Dausod was one of the nine panchayats selected under the United Progressive Alliance government’s sanitation scheme, the Nirmal Bharat Abhiyan, in 2012. And since last year, there has been new toilet construction under the Swachh Bharat mission, which allows any household that does not have a government employee in the family to get Rs 12,000 for toilet construction.

The estimates of toilet coverage in Dausod vary.

Vikram Singh, the retired army man, approximated that around 80% houses today have toilets, whereas a decade back, when he built one, only a quarter of households had them. Navratan Yadav, who was sarpanch till last year and led a toilet construction drive here under the Nirmal Bharat Abhiyan, claimed the coverage is 90%, better than the achievements in Bikaner and Churu.

Sonu Chauhan, the current sarpanch, estimated that toilet coverage in Dausod is lower, at 60% to 70% of all households. “There have been delays in Swachch Bharat funds,” said Chauhan, taking a break from cooking at her home.

Her husband Navrang Chauhan, who administers work in the village on her behalf as the “sarpanch pati”, a practice common in Rajasthan’s villages, said 200 of the families who built toilets did not get reimbursed under Nirmal Bharat Abhiyan. “This year, we did not get photographs of new toilets from anyone,” said Navran. He was referring to the requirement for households to submit three photos – of the plinth before toilet construction, the under-construction toilet, and the fully constructed one – before they can get Rs 12,000 reimbursed under Swachh Bharat mission. 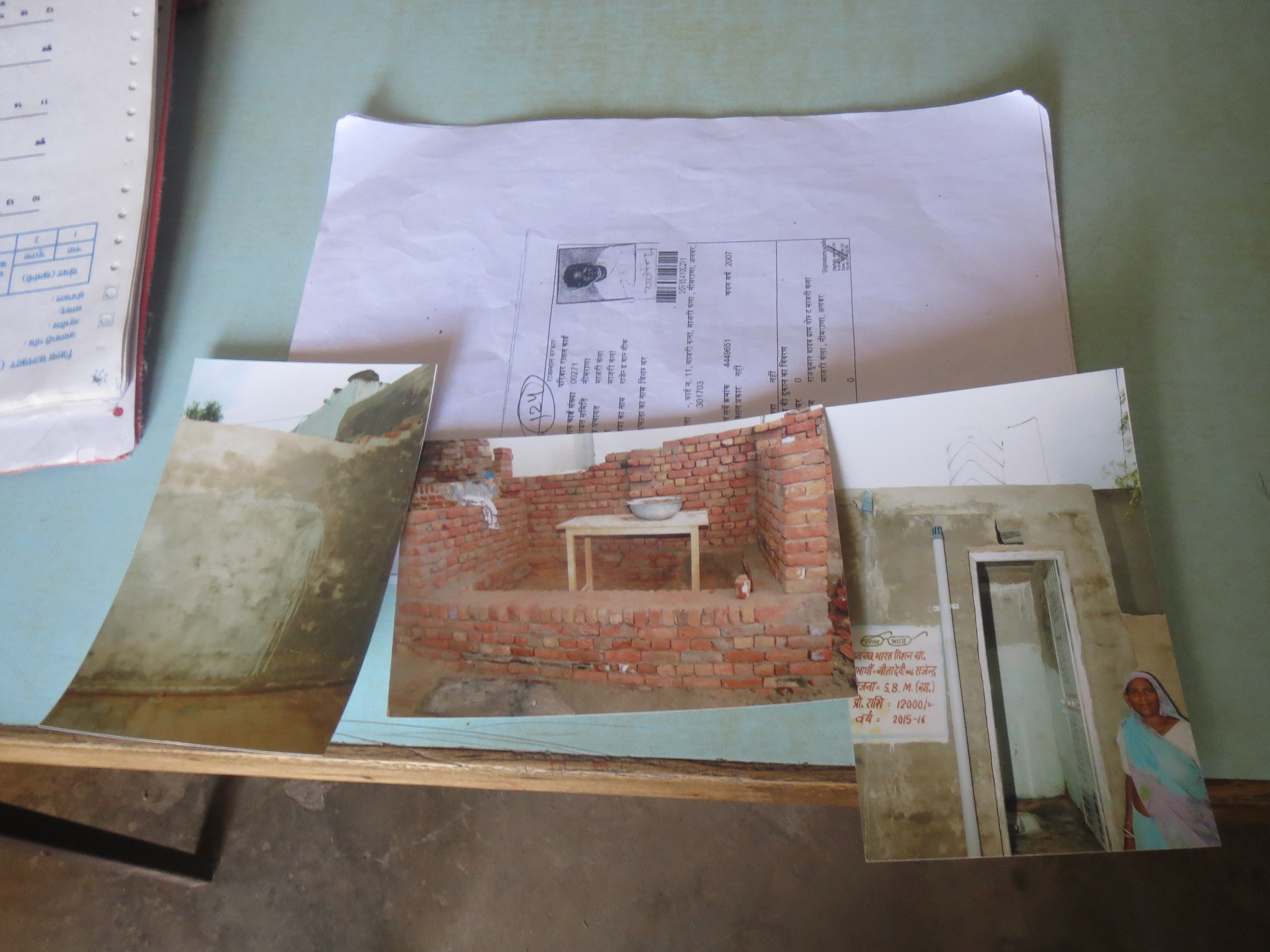 A beneficiary has to submit photographs of the toilet at various stages of construction.

Sonu Chauhan, the sarpanch, said a meeting of Dausod villagers with Rajasthan’s Swachh Bharat mission director Swarn Kumar Bunkar and Neemrana block officials on August 28 turned stormy for this reason. “Many villagers complained that the government had not reimbursed funds,” recounted Chauhan. “A number of men got up and said latrine use is not healthy, that they get exercise and fresh air and can go check on their farms when they defecate in the open.”

If the toilet construction in Dausod is not yet complete, why then did the administration categorise it as free from open defecation?

Blame this on statistics, said Manoj Yadav, who acts as the Neemrana block pradhan on behalf of his wife Savita Yadav. “In 2012, under Nirmal Bharat scheme, officials did a survey of households which lacked a toilet,” he said. “In Dausod, 304 families were identified out of total 889 households. By July 2015, all online approvals for building toilets for these 300-odd households were done. So, in the online database, Dausod automatically became an ODF panchayat, free of open defecation.”

Dausod and other panchayats in Rajasthan may have made some gains in eliminating open defecation. But instead of effectively monitoring and encouraging these, the government is conferring ODF status on the basis of online compliance with toilet construction targets of 2012.

If the trend continues, the ODF villages and towns in 2019 will simply reflect administrative units that on paper are compliant with previously set construction targets, not communities that have successfully eliminated open defecation.

In Dausod, block officials have been given instructions that households who have got toilets approved after July, after the panchayat was granted ODF status, will “get payments offline”, explained Manoj Yadav.

Swarn Kumar Bunkar, the director of the state’s Swachh Bharat mission, dismissed this as a minor concern. “This cannot be helped since the total number of beneficiaries will keep increasing as joint families split into nuclear ones.” 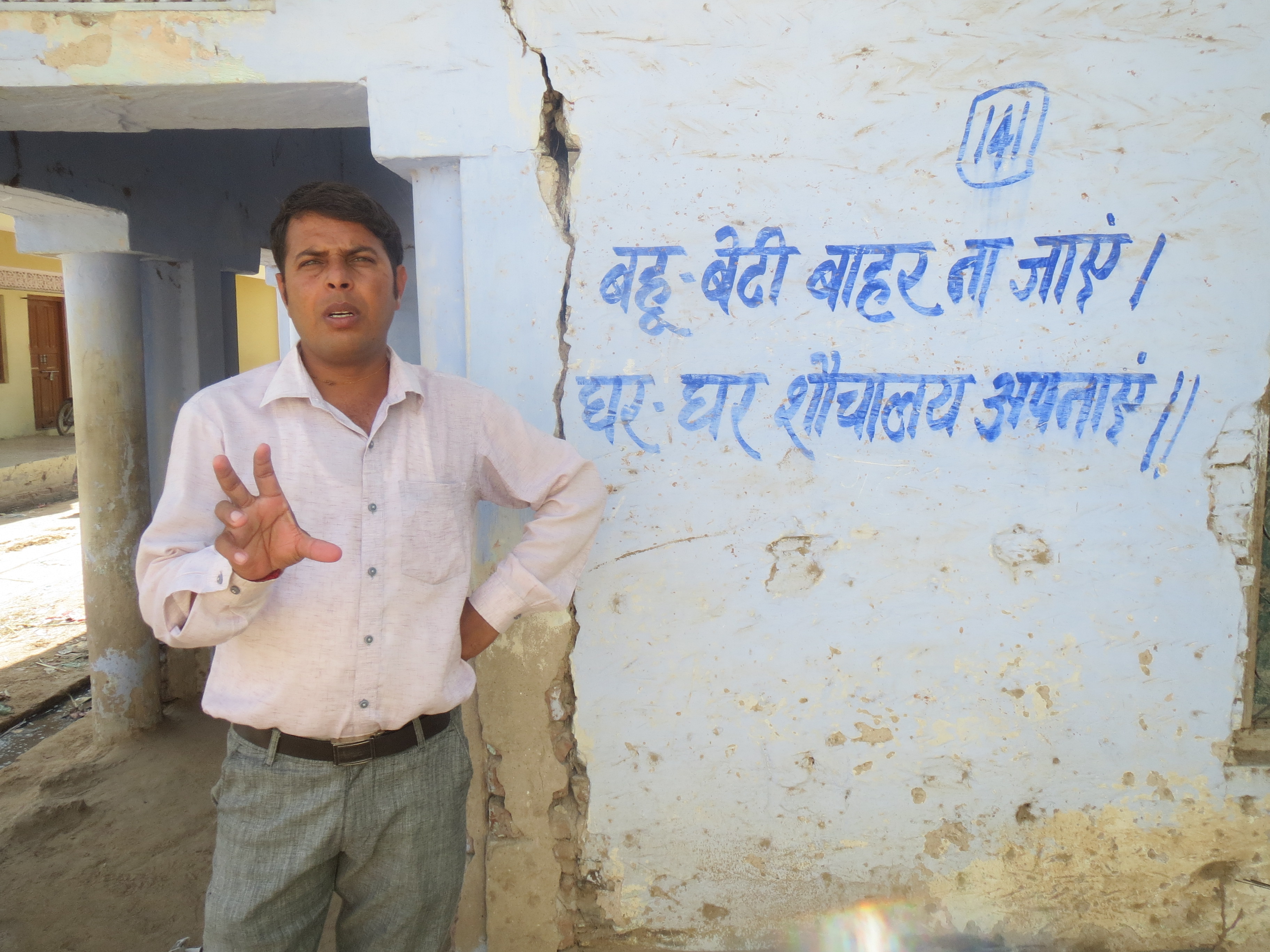 Officials concede that they are struggling with not just 100% coverage but also with the technology of toilet construction.

Experts prescribe building two-pits latrines, each pit 4-feet deep and 3-feet wide, in village households. It takes around five years for one pit to fill up. Once the first pit is full, the household can use the second pit while the faecal matter in the first breaks down, turning into manure. On average, a two-pit latrine costs Rs 12,000 to Rs 15,000, which is not a lot more than what the government grants. A proven technology, this has helped eliminate open defecation in most other developing countries.

But almost every household in Dausod is building latrines with single pits which are twice as big – 20 to 40 feet deep and 5 to 7 feet wide – and cost Rs 20,000 to Rs 30,000. They fear that the smaller pits will fill up too quickly. It is the same in the nearby village of Majri Kalan. Costs have also increased because most households that got approvals for toilets decided to build bathrooms as well.

There is yet another reason why villagers are choosing single pits. Till 15 years ago, Dausod had a system of dry latrines which were cleaned manually by dalit communities. With the arrival of flush toilet, the practice ended. But because of the lingering association of latrine cleaning with manual scavenging, wealthier families which constructed toilets first built latrines with large single pits so they can put off emptying them for as long as possible. They now get these cleaned mechanically by tankers with suction pumps that charge Rs 1,300 to Rs 1,800 for the task. The same practice is now being mimicked by poorer households who cannot afford large pits, yet are building them anyway.

“We took Rs 20,000 loan to build a latrine with a 25-feet pit so that it does not fill up. If we build a new latrine, it should last a lifetime,” said Raj Kaur, who works in the National Rural Employment Guarantee scheme. She and her husband have repaid Rs 10,000 of the loan so far.

Though many villagers appreciated the convenience of the new toilets, many families, particularly low income dalit households, confessed to having built them under pressure from the top. “A year back, the sarpanch said this time it is compulsory for you to build a toilet,” said Mukesh Valmiki, a construction worker who spent Rs 40,000 on a toilet and a bathroom after borrowing Rs 20,000 from a local trader. He built the bathroom because of his wife Santosh’s privacy concerns.

Like a majority of the villagers in Dausod, Mukesh Valmiki too got a latrine built with a large 30-feet deep pit. “If it gets filled, I will get it cleaned by the tankers,” he said, pointing to a mobile number painted on several walls nearby for mechanical pit cleaners. 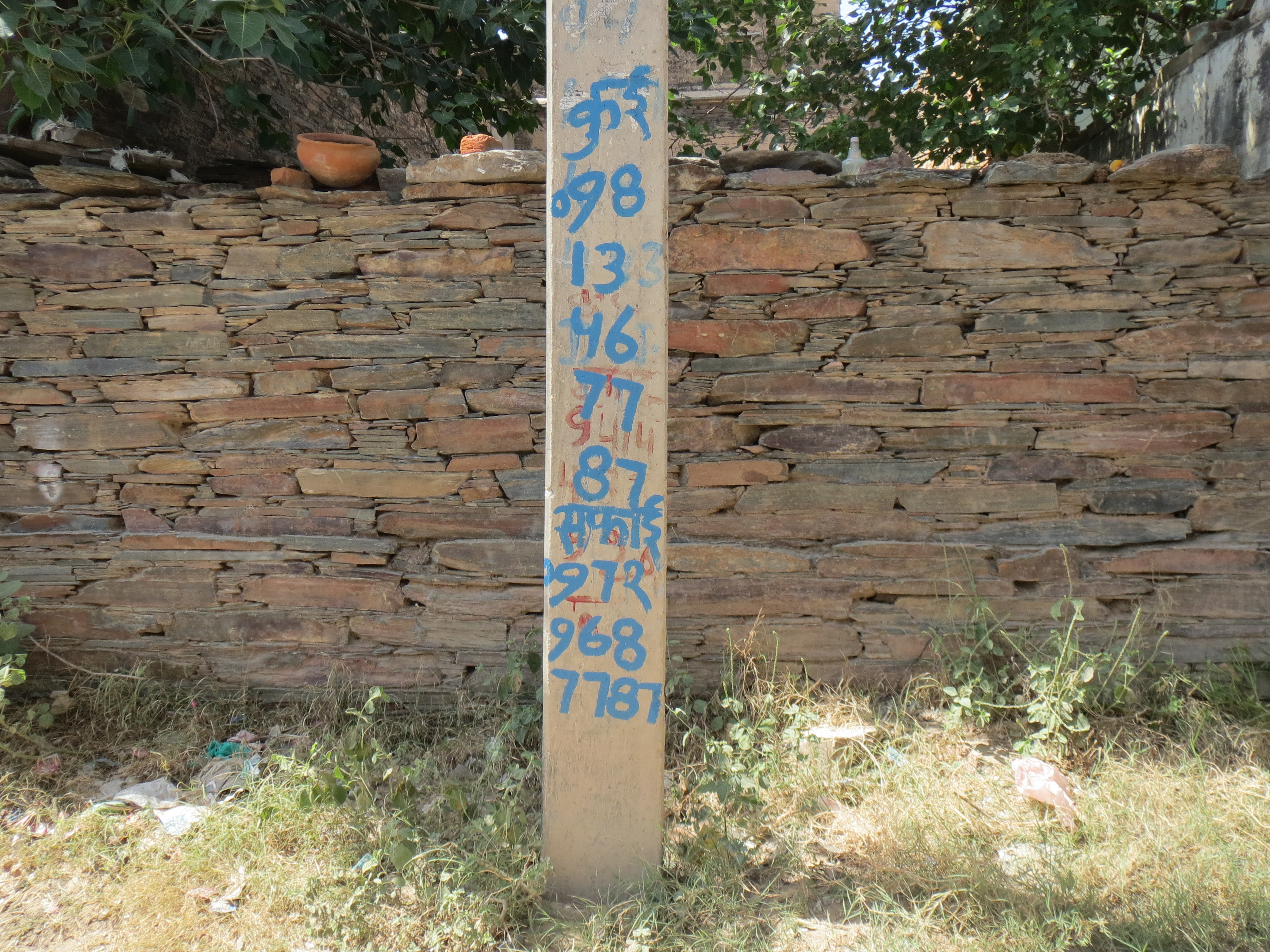 Nikhil Srivastav, a sanitation researcher with the research institute for compassionate economics (r.i.c.e.), said the bigger pits may be doing more harm than good. “It is like building underground rooms for containing faeces. The government should be cautious to not encourage this in any way,” Srivastav said.

Besides, the problems that open defecation perpetuated are still getting repeated: the tankers that are hired to mechanically empty latrine pits are simply dumping the faecal matter, some of which does not break down underground, on vacant lots near villages.

Swachh Bharat mission wants to change this behaviour by explaining the pros and cons of single pit-versus-two pit technology through an information programme, for which it has allotted 8% of the scheme’s budget. In Rajasthan, this comes to approximately Rs 180 crore of this year’s Rs 2,251 crore outlay.

But in Dausod, panchayat representatives said they have received no additional funds besides what was meant for construction. Alwar district, as it turns out, has spent nothing on providing information and promoting latrine use since April, though it has spent Rs 2.4 crore in this financial year on construction. The sarpanch and the block pradhan said that, under pressure from the district administration to meet targets, they spent their own money on organising meets with villagers and masons to convince everyone to get smaller two-pit latrines.

Incidentally, the first meeting with villagers on two-pit technology took place after August 28, by which time Dausod had already been officially declared open defecation-free. “We showed them photographs to explain how two-pit latrines are cheaper and will work better in the long run. But most families were adamant on building deep single pit-latrines,” said a block official. “We have people defecating in the open, and we have tonnes of faecal matter thrown in one go in the open. Then, what is the point of new construction?”