Contribute Now
Ad
Nearly 96% villages in India are electrified but only 69% of homes have electricity connections, according to a new report that draws on data from six states.

The data imply that a large part of India’s electrification and energy access is on paper. The report covered 714 villages in 51 districts, including 8,566 households across six energy-deficit states (Bihar, Jharkand, Madhya Pradesh, Odisha, Uttar Pradesh and West Bengal).

“In development discourse in India, household energy access is measured by household’s primary source of lighting and cooking, or through electrification status of household,” said the Access to Clean Cooking Energy and Electricity – Survey of States report. “These are unidimensional measures with binary states and do not provide a sense of the true deprivation experienced by households.”

The report is a collaborative study by the Council on Energy, Environment and Water with the Department of Political Science, Columbia University, US, with support from the Shakti Sustainable Energy Foundation.

Bihar, due for state elections next month, is the worst performer. While 96% of Bihar’s villages are electrified, only 56% homes have electricity connections, the report said. Power demand has risen 94% over seven years, as IndiaSpend reported earlier. 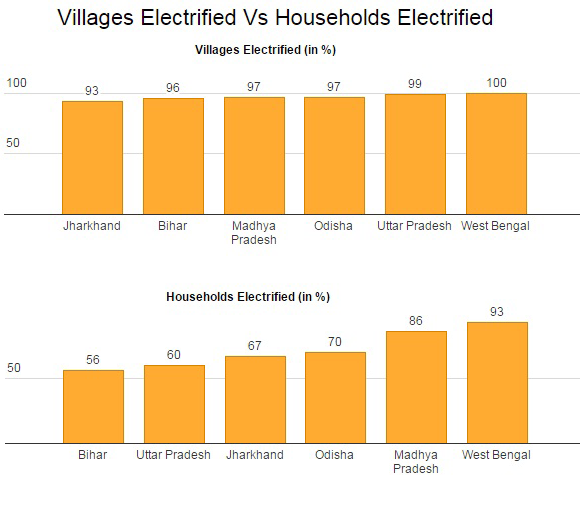 In UP, three of four households get electricity for less than 12 hours a day

Nearly half the households, despite an electricity connection, are classified under the lowest level of energy access due to the quality, reliability and duration of supply. 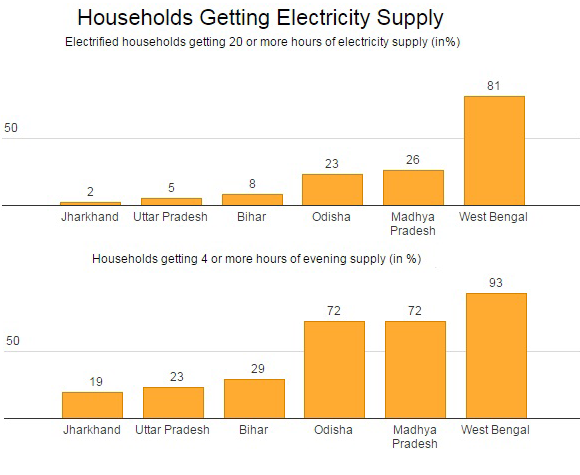 Uttar Pradesh does the worst job with supplying electricity. Only 5% of electrified households get supply for 20 or more hours, while 23% get four or more hours of evening supply.

Three of four rural electrified household in UP receive electricity for less than 12 hours a day.

In Jharkhand, only 2% of electrified households get electricity supply for twenty or more hours; 81% do not get four or more hours of evening supply, while 60% face three or more days of complete blackouts every month.

West Bengal is the best performer

Almost every village (100%) in West Bengal is electrified with 93% households having access to electricity.

The evaluation of energy access was based on six dimensions (capacity, duration, reliability, quality, affordability, and legality) in the electricity access framework.

A tier was assigned to each household for each dimension. The tiers, ranging from 0 (lowest level) to 3 (highest level), represent increasing energy access.

In West Bengal, the majority of households fall under tier 3, while more than half of the households in the remaining states, except Odisha, came under tier 0.

A third of rural households reported electricity theft in their neighbourhood.