Contribute Now
Ad
Whether you view them as a scourge or a convenience, emoji are ubiquitous in online communication. In celebration of the power of the emoji, the National Young Writers' Festival in Australia is soliciting submissions for emoji stories for this year’s festival.

Dubbed the “Emoji-pocalypse”, the category is “tongue-in-cheek, but it’s also an exploration of different ways to use emojis to communicate,” says festival co-director Alexandra Neill.

The emoji stories must be fewer than 140 characters (the same length as a tweet), and will be physically handed out as “capsule stories” throughout the festival.

The submissions fit into three categories. The first are straight narratives, using faces and strategic line breaks to create a story. Others, like the main article image, use emoji to draw a scene. Finally, some emoji stories are abstract and lyrical.

Neill acknowledges submissions may take a couple of read-throughs to understand, but a narrative is certainly present in the sequence of icons. Some of the emoji carry the stance or the emotion of the scene, while others visually depict the action or characters of the story.

A quick background on emoji

Emoji are an evolution of the emoticon, a sequence of punctuation marks intended to represent a face. An early example of emoticons comes from 1881, when cartoonist Joseph Keppler published a range of emoticons in his satirical newspaper Puck. 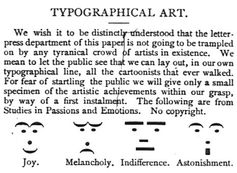 Modern electronic emoticons date to a 1982 e-mail from Scott Fahlman, a computer scientist who proposed using the sequence of characters :-) as a “joke marker” to help his colleagues decipher jokes written in e-mails.

Emoticons were quickly adopted by many online communities, and many different variations were created. These sequences of symbols were recognized by programmers and turned into “graphical smileys”, and then eventually into the emoji that are found on mobile phone keyboards and messaging programs.

Emoji and emoticons have developed to mean much more in language than the faces they represent. Folklorist Lee-Ellen Marvin described them as:

[The] paralanguage of the internet, the winks which signal the playfulness of a statement over the seriousness it might denote.

They can also indicate characteristics of their users, such as linguist Tyler Schnoebelen’s observation that people who put noses in their emoticons tend to be older than those who use noseless emoticons.

Schnoebelen has another observation about emoji: they have grammar. Presumably, then, one could communicate a complete thought using only emoji.

There is a lot of controversy over whether emoji can tell a story on their own. While emoji can convey mood or tone, they have some drawbacks. In an interview for the New Republic, American linguist John McWhorter argued:

You couldn’t communicate only with emoticons. You have to know what you’re talking about, what happened, when, and so on. Emoticons don’t do that.

Yet many submissions to the festival have taken up the challenge, creating clear, if simple, narratives.

Australian comic Laura Davis, whose work will feature at the festival, pairs emoji with text to tell tiny stories.

Emoji stories rely on the grammar of emoji, investigated by Tyler Schnoebelen. Some of the grammatical rules for emoji stories are represented in the stories shown above.

For example, emoji stories represent linear time and action - but also have spatial considerations based on the emoji themselves. The emoji of a gun has the barrel pointing to a the left, so the person being shot at must go to the left of the emoji.

Another example of the grammar of emoji include the observation that the stance, or the attitude that one has about something, comes first in an emoji sequence. In the bank robbing emoji story above, the most of the emotional faces are at the start of each sequence.

Does the emoji story spell the end for written narratives? Probably not.

Emoji represent another tool in our linguistic toolbox, and these creative artists and authors have used the tools available to make whimsical, clever narratives out of symbols.

Such efforts are now being recognized by outlets such as the National Young Writers' Festival, even if they make some people:

Cry and throw their phone into the toilet. Lauren B. Collister, Author provided