Contribute Now
Ad
How can policy-makers most effectively tackle corruption? The question is hardly new and over the years it’s one that many have given plenty of thought to. Building up a consensus on what works and why it works has proven difficult, and this has perhaps contributed to the enthusiasm for a novel, and democratic, frontline in an ancient fight.

We know that increased transparency tends to make it harder for the corrupt to do their thing; we know that clear lines of accountability make it more difficult to either shirk responsibility or simply operate under the radar. We know that societies where people are trusted to “do the right thing” tend to show lower perceived levels of corruption. But when policy-makers go looking for specific lessons to draw, the toolbox can still be disappointingly bare.

One thing that everyone in the anti-corruption world can, however, agree upon is that context matters. The challenge of dealing with money launderers who skilfully work their ill-gotten gains back in to a financial system is quite different to that of how to deal with a bureaucrat demanding an extra (under-the-counter) fee simply to process your driving licence application. But one idea has attracted anti-corruption thinkers in a whole range of diverse settings: it is individual citizens who frequently feel the direct effects of corruption, so why not put the individual at the centre of efforts to weed out corrupt practices?

What might such citizen-centred anti-corruption policies look like? In India, for example, they can come in the form of websites such as www.ipaidabribe.com. IPB was created in 2011 by Ramesh and Swati Ramanathan, co-founders of a non-profit organisation in Bangalore called Janaagraha (“people power”). They were looking to help individuals who were sick and tired of having to bribe bureaucrats simply to do their respective jobs. Citizens could go to IPB and report the official, explaining how much they had had to pay. By the autumn of 2015 nearly 49,000 reports had been made across 645 Indian towns and cities and IPB had partnered with organisations in 25 other countries.

The advantage of sites like IPB is two-fold; firstly, the names of the officials demanding the bribes are anonymised. This helps prevent spurious reports from people who have been, say, overlooked for promotion or otherwise “wronged”. Secondly, the aim of IPB is not necessarily to see people hauled up before the courts and slung in jail. On the contrary, IPB tries to come up with specific anti-corruption solutions that cut out (or at least severely diminish) the opportunities for potential corrupters to do their thing.

One such example came from Bangalore where there seemed to be a pattern of driving test examiners extracting bribes from those wanting to take a driving test; the examiners were taken out of the loop and the test was done in a simulator. You finished the test and you got the result as soon as you stepped outside – no bribe necessary.

The IPB model hasn’t worked everywhere (it failed miserably in China, for example, but the underlying principles have been followed in a number of other places. A citizen feedback model, for example, has been developed in the Punjab that uses text messages to garner information on civil servants who were demanding bribes in that part of Pakistan.

The roles of anti-corruption superstars have also been lauded, whether that be in the form of TV shows such as “Integrity Idol” in Nepal or civil society movements in Indonesia which have been instrumental in supporting the country’s embattled anti-corruption commission. Citizen empowerment, so it would appear, could be the way forward.

I’m not quite so sure, and in an article written with Serena Verdenicci recently, we warned against building up expectations. Innovation is good, and if it helps those who are hurt most by petty corruption to feed their experiences in to a wider system, then change can come from it. 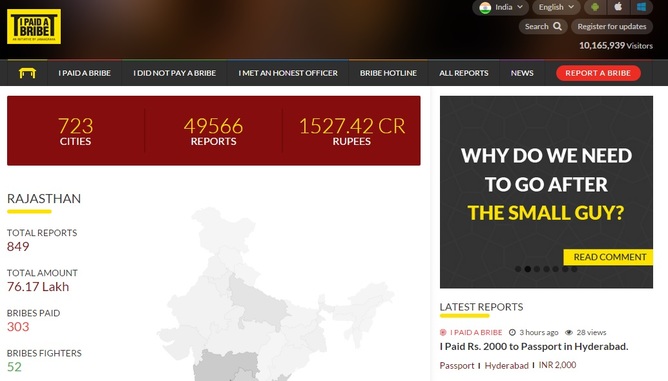 The site at ipaidabribe.com is a trove of data on corruption reports. Screenshot

But if people-power is going to work, then three things need to be apparent. Firstly, if citizens are going to be empowered to take decisions that help weed out corrupt practices, then governments and local authorities need to be willing to cede power to them. They need to be happy for citizens to genuinely get involved, take decisions – and then act on them. Authorities, in other words, need to limit their own power – not something that too many politicians in states with significant petty corruption (and states where democracy may not be seen as particularly significant anyway) are generally inclined to do.

Secondly, citizen empowerment tends to work best when it develops organically. Indeed, that happened with all of the above examples. That needs a fair bit of stickability on behalf of the those involved. Finally, the programmes have to be well-designed and organised in such a way as to enable them to have long-term futures. Don’t, in other words, expect too much too soon and do make sure that the goals are both achievable and measurable. You need to have patience, to realise that changing deep-rooted processes takes time and then to be clear about what you would regard “success” to be.

These three goals can be achieved. But doing that is not easy. Plus, in states where democratic structures aren’t the norm, there is little reason to believe that governments will suddenly think that people power is the answer. It’s also worth noting, as authors such as Heather Marquette and Caryn Peiffer have, that for many people corruption is not actually the problem – it is the solution.

Well-meaning proponents of citizen power will do well to make this part of their thinking, because corruption for some is the process that gets their son/daughter in to the good school, or gets them the vital health care that they need. In those circumstances people may find that corruption gives them a consistency and stability in their life that they otherwise wouldn’t have. That doesn’t mean they like bribing people – but it does mean that they know exactly what’s required to get what they want when they want it.

This story was originally published on The Conversation.