Advertised as “enhancing alertness and performance”, energy drinks are regularly promoted alongside extreme sports, video games and youth-centric activities such as lifesaving.

Youth patterns of energy drink consumption are not well-reported. But the few studies conducted with children have shown up to two-thirds (62%) of grade 7 to 12 students drank energy drinks in the past year.

A recent Australian study suggests the average youth energy drinker starts at the age of ten.

Energy drinks may pose serious harm for people aged 18 years or younger. Research with young adults indicates the stimulant effects can cause headaches, sleeping difficulties and heart palpitations. These side-effects are generally attributed to the primary ingredient, caffeine.

The effects of energy drinks typically mimic those reported in cases of caffeine intoxication, such as anxiety, agitation, insomnia, heart palpitations. The cardiovascular effects of caffeine, such as higher blood pressure, may be contributing to increased disease.

Young people have a lower caffeine tolerance and are therefore more vulnerable to the negative effects of caffeine. Data from the New South Wales Poisons Information Centre and the United States National Poison Data System show the majority of energy drink cases involved children and adolescents. Use by young people with pre-existing heart problems is particularly worrisome, given increased risk of high blood pressure, arrhythmia, and sudden death.

Given the heightened risk of harm, governments should ban the sale of energy drinks to anyone under the age of 18 years old.

What safety measures do we have in Australia?

The Australia New Zealand Food Standards Code specifies that energy drinks may contain a maximum of 80 milligrams of caffeine per standard 250 millilitre energy drink. This is equivalent to the amount of caffeine in a cup of instant coffee (77.5mg/250ml).

Standards for the package labelling mean manufacturers must provide a maximum recommended daily intake, and warn against consumption by pregnant women, those who are sensitive to caffeine and children.

In practice, labelling is typically of poor visibility (located near nutrition information in indistinct text colour and size), with no specific age limit for children.

Despite claims from the Australian beverage industry that our regulations are among the tightest in the world, energy drink manufacturers and distributors currently operate with no restrictions applied to access, availability and marketing to children.

The Australian Beverages Council released An Industry Commitment that “marketing and advertising are not directed at children”. But research suggests Australian children are influenced and describe energy drink marketing as humorous, entertaining and relatable.


How do our policies compare internationally?

Lithuania made headlines in November 2014 when it banned the sale of energy drinks (containing more than 150mg of caffeine per litre) to anyone under 18 years old. Despite being the strongest regulatory approach taken so far, Lithuania did not impose restrictions on the amount of caffeine which can be included in beverages sold to over-18s. 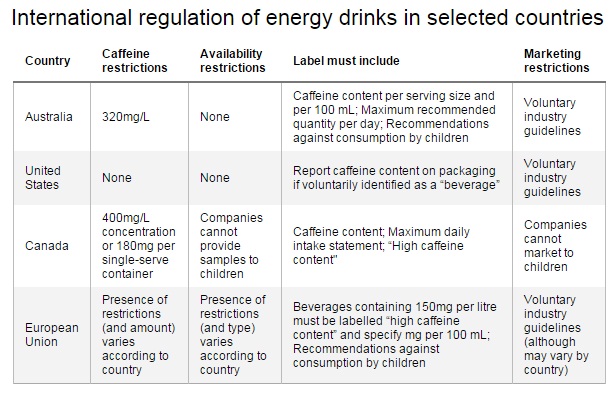 The European Commission Regulation specifies “high caffeine content” labelling in the same field of vision as the beverage name. The label must also state it is not suitable for children.

Perhaps unsurprisingly, energy drinks are poorly regulated in the United States, which has one of the largest energy drink markets worldwide. The US does not impose a maximal limit on caffeine content for energy drinks, or have any restrictions on the sale or marketing to children.

In 2014, the US Food and Drug Administration indicated energy drinks should be classified as beverages, which means manufacturers must report the presence of caffeine on packaging. But these guidelines are non-binding.

Similarly to our Australian Beverages Council, the American Beverage Association issued voluntary industry guidelines specifying that energy drinks should not be marketed to children. However, a 2013 US Senate Hearing exposed aggressive marketing to children by major energy drink manufacturers.

There is a lack of evidence showing energy drinks are safe. So as a precautionary measure, governments should ban their sale to anyone under the age of 18 years.

Logistically, this is achievable from a retail perspective, where supermarkets, service stations, newsagents and milk bars already stock age restricted products such as tobacco, pornography and scratch-to-win lottery tickets.

An extension of this model could reflect changes recently introduced in France, where manufacturers reduced the caffeine content of beverages in order to avoid a tax levy based on caffeine content.

Such a ban could be lifted if, down the track, the evidence shows they are indeed safe.

As with many products that are commercially available and can adversely affect health, the industry associated is extremely powerful. It has sophisticated marketing techniques to groom children and ten-year strategies to engage and coerce governments. Their sole motive is profit.

In the end, it is the government’s responsibility to act to prevent harm to our children in the absence of evidence of safety. We need to move beyond relying on voluntary industry guidelines and further regulate labelling and marketing, avoiding loopholes which allow companies to disguise product information and warnings.

US: Johnson & Johnson asked to pay $29 million to cancer patient who used its talcum powder