Contribute Now
Ad
Those who love books are said to share the belief that life is an imperfect vision of reality and only art, like a pair of reading glasses, can correct it. For those who need glasses of this type, Glasgow University library might be a good place to hang out. Its special collections department has recently acquired a series of mysterious old books, including the missing link in one of its collections, the 1564 edition of the Délie, the chef d’oeuvre by the French Renaissance poet Maurice Scève (c1500-c1564).

Scève’s Délie could be described as the best ever collection of poetry that nobody understands. The arcane verses are peppered with text/image riddles known as emblems that tease the reader seeking final meaning: a maiden stroking a unicorn, the Tower of Babel, the ivy-covered wall, the rising dead, a moth to the candle, among many others. The ultimate message? Perhaps that love conquers all, in this case that of the eponymous character, who is possibly meant to represent the beauty that is art. 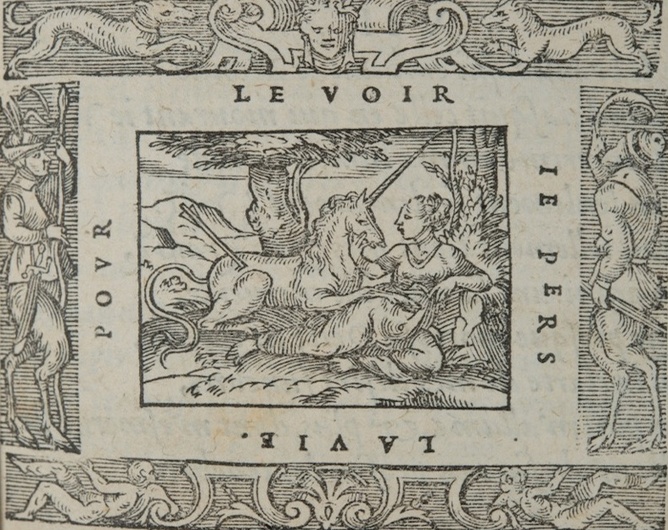 Emblems were to the Early Modern world what comics, logos or adverts are to us. Like the ones in Délie, they would traditionally put together a title or motto with a picture, revealing an enigmatic overall message when you read them together. This could be about the need to enjoy beauty because, like a rose, it withers; the idea that if a scholar stays silent no one can tell that he doesn’t know what he is talking about; or life as a game of chess where all the pieces, from pawns to kings, end up in the same bag at the end.

The term comes from the title of Andrea Alciato’s 1531 Emblematum liber (“Book of Emblems”), starting a genre that is also well represented by Daniël Heinsius' love meditation Emblemata Amatoria in 1601 (see title image). These emblems appeared in books – popular books, bestsellers even – but also on the costumes of courtly parades, on the decorations of churches and schools and inscribed on the palaces of Europe. Hundreds of years before the internet, these visual representations crossed cultural frontiers. And emblems were arguably no less powerful: Protestants and Catholics used them, as did princes and pornographers.

To study the emblem is to study the evolution of printing, from the crude woodblocks of the early 16th century to the sophisticated engravings a century later. And to follow the fortune of the emblem, from its early tentative beginning to the time when it was all the rage – and then to its fall from grace is, perhaps, to follow the evolution of mankind’s first visual age.

The Délie is very rare, purchased by the university at Christie’s. It was part of the last remaining private collection of emblem books, which comprised most of a discovery in north-west England known as the Yates, Thomson and Bright sale. Only a handful of copies of Délie are in public hands, the last such sale was more than 20 years ago and another is not now foreseeable.

The university was willing to drop other priorities to make the five-figure investment because Délie was the only gap in the Stirling Maxwell Collection – the biggest collection of emblem books and related literature in the world. The collection contains some 2,000 volumes – far beyond nearest “rivals” like Princeton and Illinois which have about 700 each. 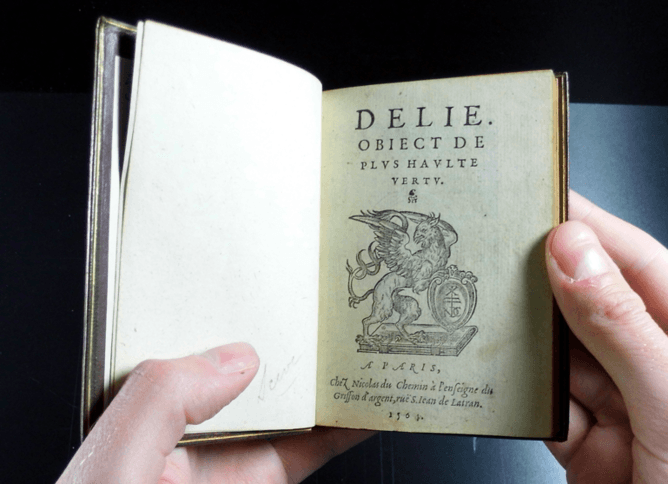 More broadly, old books are back in fashion, mysterious picture books in particular. My opening quotation about imperfect reality was taken from Ian Caldwell and Dustin Thomason’s 2004 blockbuster thriller The Rule of Four, which is soon set to receive the Hollywood treatment.

Credited with taking Dan Brown to a higher intellectual level – the third Da Vinci Code film is also imminent – The Rule of Four sees Princeton students and their entourage delving into esoteric mysteries at the heart of which lies the Hypnerotomachia Poliphili.

Literally translated as Poliphilius’s Dream Strife of Love, this 1499 text is a masterpiece of Renaissance printing. Its images draw us in with their bustling processions, exotic animals, dismembered bodies and extravagant costumes. They predate the emblem era but are very much in the same spirit: enigmas abound as we try and decipher who the characters are and what they are doing.

Central to the overall narrative is a dream-based interchange in which the boundaries between reality and the dream world are blurred, and no interpretation is definitive. This is echoed by the very naming of author Francesco Colonna only in an acrostic formed from the opening letter of each chapter – again we can’t be sure if this is really the author or another layer of deception.

A copy of Hypnerotomachia Poliphili was also on offer at the Christie’s sale, with a starting price of $130,000 (£85,900) – luckily Glasgow University had already obtained a copy in the 18th century. Thumbing through its pages, it is easy to appreciate how it has the makings of a modern esoteric thriller.

Indeed, Dan Brown himself mentions the Hypnerotomachia Poliphili in The Da Vinci Code, as does Johnny Depp when playing rare book dealer Dean Corso in Roman Polanski’s The Ninth Gate. In the latter story, picture books produced by Lucifer himself hold the key to life’s mysteries – along with a few naked romps with Emmanuelle Seigner.

What’s the attraction in all of this? The mystery that comes with the passing of time, of course, but also the retro wow of what was once new technology. Colonna’s book remains modern in its appeal with its elegant layout and custom-made font. Add in the images and there is nothing more trendy.

Nowadays it is Instagram and Facebook that satiate our taste for short messages that play on a picture. In the same way that the likes of Scève’s unicorn helped previous generations grasp the bigger questions, such as the passing of beauty or the inevitability of death, Instagram postings will often be musings on the nature of the lives we lead. It seems that there is something eternal at work, something beyond profits and price tags. Then, now and always, decipher these messages and we can solve life’s imperfect vision of reality.

Drug war capitalism in Mexico and the novels of Don Winslow