Contribute Now
Ad
The Narendra Modi government has been imploring India’s private sector to spend. Everyone from the prime minister to the finance minister has made impassioned pleas. Last month, Modi even urged companies to take risks and increase investments.

But Indian companies just aren’t ready to put out the cash for expansion – and it could stay that way for at least the next two years.

A study by credit ratings agency India Ratings and Research, which analysed the capital expenditure pattern of the top 500 listed firms, shows that it may take between 24 and 36 months to revive the cycle. Capex involves spending on projects or physical investments. The analysis does not include financial institutions and banks.

Currently, according to the Reserve Bank of India, utilisation levels for manufacturing companies are around 71.5%. “India Ratings estimates that while the capacity utilisation of these 500 corporates may have shown a marginal uptick in the 2015 financial year, still the utilisation level continues to hover around a decade low,” the report added.

On September 29, after cutting the repo rate by 50 basis points to 6.75%, Reserve Bank of India governor Raghuram Rajan said that private investment in the country needs to restart. “Capacity utilisation is still very tepid and corporate investment has been weak,” he told reporters in a press briefing. 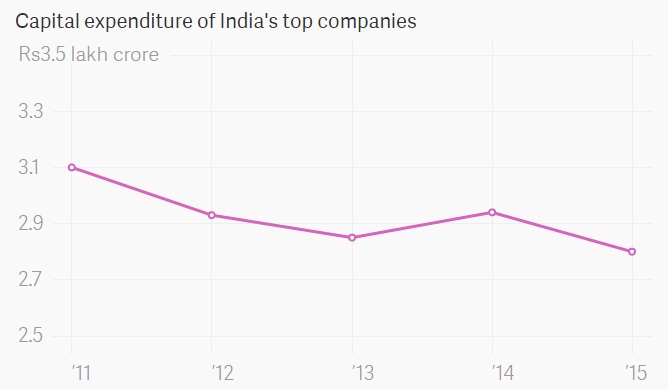 Even India’s largest engineering and construction company is feeling the pain. Larsen & Toubro – often considered as a corporate proxy for the overall economy – is seeing sluggish growth in new orders, and many of its factories are not operating at full capacity.

“In terms of economic revival, it is not happening on the ground,” AM Naik, L&T’s executive chairman, told Reuters last week. His estimate was that the revival in capex in the private sector will take a year at least.

There are a handful of reasons for this situation. One, commodity prices remain benign. With falling commodity prices, the metals and mining sector is struggling with low prices for its products. Between 2005 and 2011, three sectors – oil and gas, metals and mining, and power – contributed to around 50-60% of the total capex of these 500 companies, the India Ratings report says.

Second, there has been a sharp fall in capacity utilisation due to slowing demand. So, as long as the current facilities are being underutilised, firms will not invest in newer ones.

Here is a look at India Inc’s capacity utilisation, according to RBI’s latest Order Books, Inventories and Capacity Utilisation Survey: 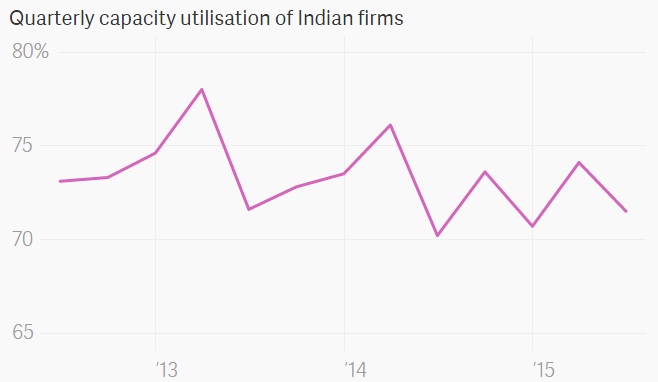 Lastly, many companies have huge amounts of debt, which curtail their ability to borrow more for expansion.

“The high leverage of a large number of corporates may limit their ability to take up even normal maintenance capex,” the India Ratings report said.

Two years ago, in November 2013, Credit Suisse had estimated that about $400 billion worth of debt was held by 3,500 companies in India. That’s almost equal to the UAE’s gross domestic product.

Meanwhile, the India Ratings report points out that the top 80 spenders out of the 500 companies they studied have strong financial health and are responsible for about 75% of the total capex.

But many firms among the rest are battling high debt, low cash generation and difficulties in accessing fresh capital. These companies “will be a drag on the overall capex spending growth over the next two to three years,” it added. It will be a while before India Inc. is back on track.