Contribute Now
Ad
Last month, the National Green Tribunal issued a notice to the central government to respond to a petition seeking a nationwide ban on cow slaughter. It gave the Centre till the end of October to reply.

In his plea to the tribunal, advocate Ashwini Kumar has cited falling cattle numbers to argue that if the slaughter of breeds native to India is not stopped, they will end up being replaced by cattle from outside the country. The case is unusual for the National Green Tribunal, which usually examines environmental offences, and it is evident that it will drag on for some time.

But are indigenous cows really declining?

Going by the numbers provided by Kumar – presumably based on India’s Livestock Census – it would seem so. Conducted at intervals of around four to six years, the livestock census tracks domesticated animals from rabbits to cows across the country, including cattle indigenous to India and “exotic/cross-bred” cattle that are brought in from outside the country.

The number of male cattle, both indigenous and cross-bred, has plummeted between 2007 and 2012, according to the 19th Indian Livestock Census. Meanwhile, there has been a sharp increase in the number of female cross-breds, though female indigenous cattle have remained the same. 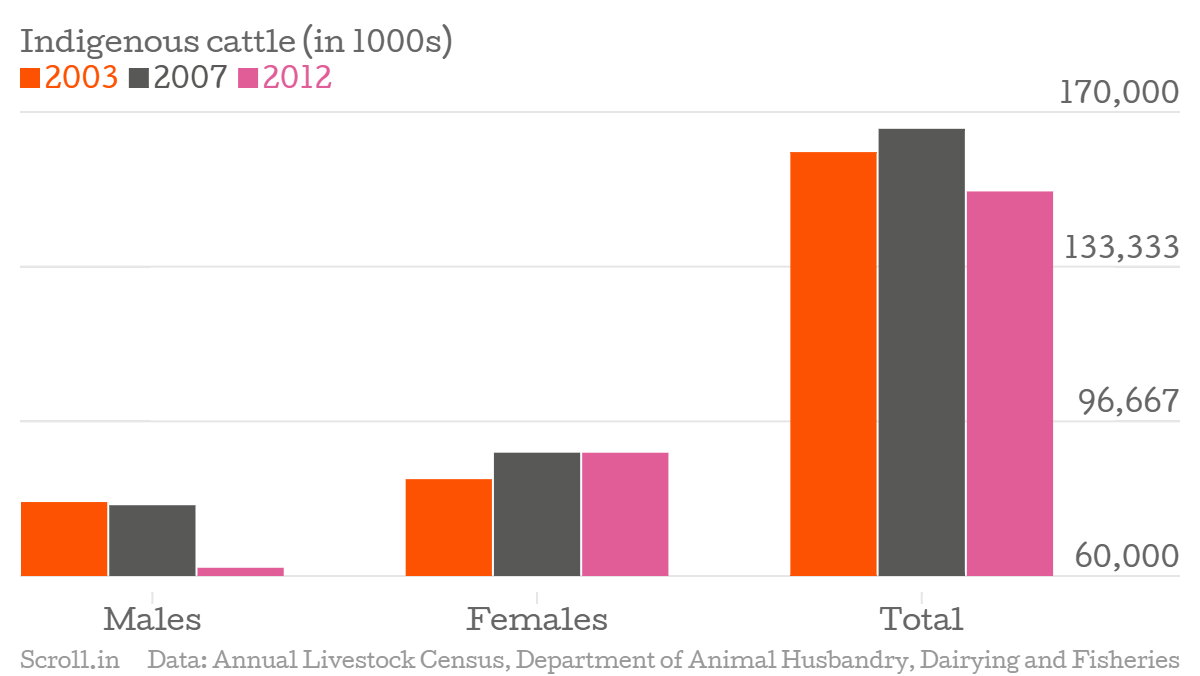 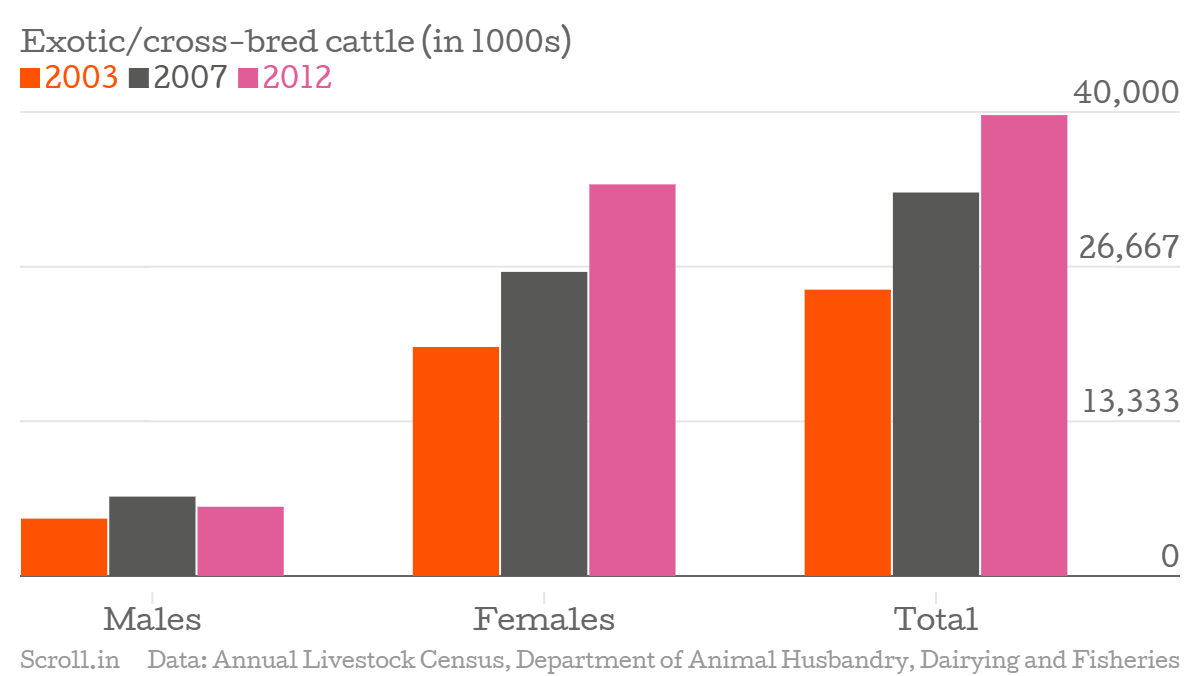 This trend squares with experts’ assertions that the decline in male cattle is natural. Indigenous bulls, normally used for farm work, are being replaced by mechanisation. Exotic and cross-bred cattle, however, are retained particularly in the dairy industry. Where females are prized for their ability to give milk, cross-bred bulls have little practical use apart from their ability to breed.

“Cattle do not give much milk and that milk is also low fat,” noted a leading livestock expert who requested anonymity since talking about cattle is “sensitive”. “This is why wherever dairy farming is organised, most livestock rearers have shifted to buffaloes.”

Other factors contributing to the decline in cattle numbers include people leaving agriculture and reducing common pasture land that diminishes the incentive to rear cattle of any kind.

“The decline in population of male cattle is obviously due to increasing mechanisation of agriculture operations and transport,” wrote Datta Rangnekar, a noted expert on cattle in India and former senior vice president of BAIF Development Research Foundation. This, he said, was proved by observations that male cattle showed only a marginal decline in less developed districts where the topography was undulating, agriculture rain-fed, and land holdings small.

But to compare the rate of decline of the indigenous cow with that of exotic or cross-bred varieties is misguided. For one, there are far fewer foreign cattle in India than indigenous ones, as this chart shows. 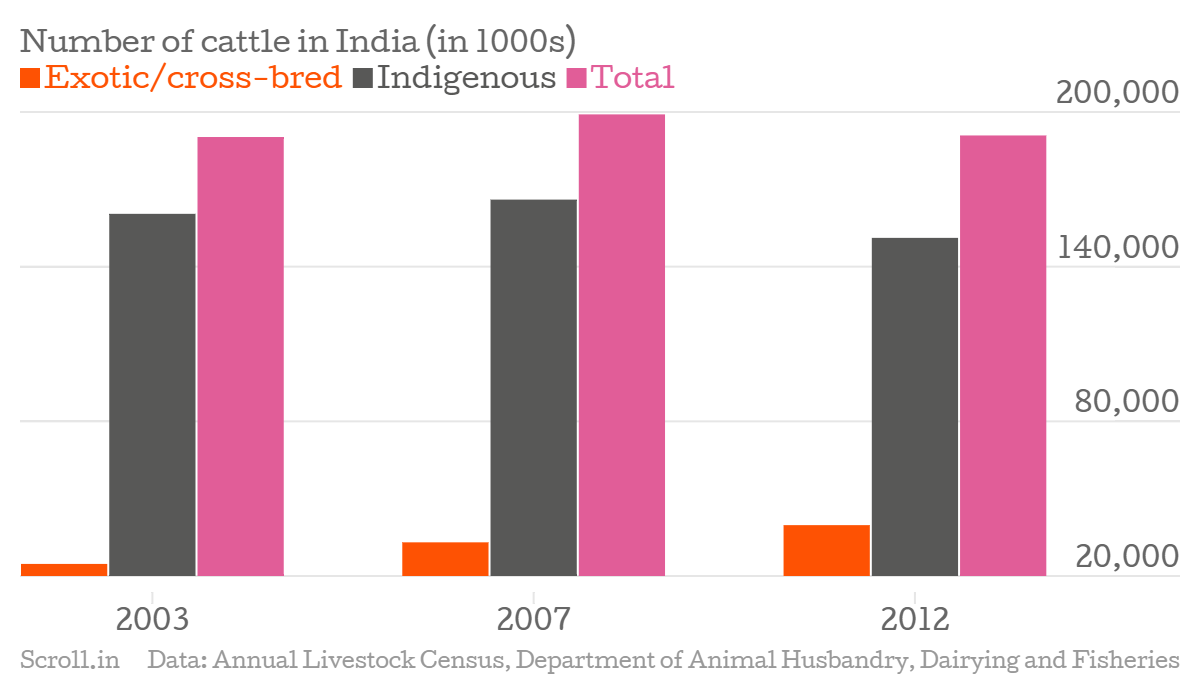 Also, the decline in cattle numbers seems to be independent of slaughter laws. For instance, Gujarat and Rajasthan, which prohibit cow slaughter, have seen a rise in the number of cattle from 2007 to 2012. In contrast, there were fewer cattle in Madhya Pradesh, which also prohibits cattle slaughter and made its law stricter only in 2012.

Rangnekar pointed out that there is no study proving the relationship either way. This study, he said, should be a participatory one with a social learning approach. “There is a need for a well-planned study involving rural families for an in-depth understanding of their perceptions regarding the type of cattle they wish to keep,” he wrote.

In his petition, Kumar also argues that indigenous cows have a higher milk production capacity than farmers are led to believe. This requires more research, the expert said, because government agencies have not taken the initiative to identify and develop indigenous breeds that are capable of producing more milk.

Perhaps the most important factor to keep in mind is that any analysis depends on these livestock numbers, which are themselves dubitable. The livestock census data is collected at block level, and not necessarily by door-to-door surveys.

“There are a lot of guesstimates involved that depend on officials in charge,” the expert said. “Nobody really trusts government numbers. If those in the private sector want to set up units for agricultural processing, they conduct their own studies. If you catch government data, you might have a heavy loss.”

Gau raksha? What India’s cattle really need is more fodder to prevent them from starving